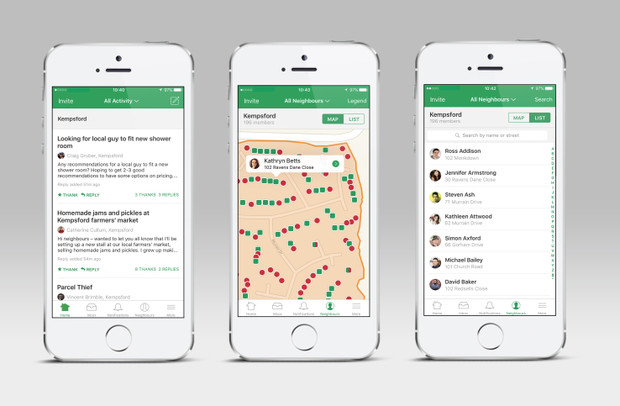 When I was last in San Francisco at the end of 2016, I asked a local journalist how she reads local news – the answer: nextdoor.com

Nextdoor calls itself the “private social network for your neighbourhood”.

It is the locked down, polite version of Facebook – not for friends, but strangers and acquaintances in your local community – otherwise known as neighbours. People share info on local roadworks or traffic accidents – or simply ask if anyone knows a good babysitter. The USP is that everything based around your postal address – which needs to be verified before you can even get started.

For millennials in San Francisco, Nextdoor is replacing the San Francisco Chronicle. Successful tech workers and entrepreneurs may have a paid subscription to The Wall Street Journal or The New York Times, but local news publishers are struggling to stay relevant.

Nextdoor is not the first to try a hyperlocal social network – publishers themselves have tried, on a smaller scale – but they are certainly the most successful. Streetlife in the U.K. was one of the most similar in concept, and had prescient investment from local publishing group Archant on a marketing for equity basis.

Streetlife’s CEO Matthew Boyes spoke about that partnership at our Digital Media Europe event back in April 2014: “Streetlife is not a place for Archant’s journalists to go input content or drive conversations, but it’s a place for them to listen.” And their digital director at the time, Paul Hood, pointed out the difference with Facebook, where you usually connect with people you already know. By contrast, he said, “Streetlife creates new and valuable conversations and connections that benefit us and the communities we serve”.

But then Nextdoor moved beyond the U.S. and built a foothold in the U.K. – claiming to have reached 40% of London neighbourhoods. And now Streetlife have thrown up their hands in defeat and sold the business, unable and unwilling to compete with the several hundred million dollar investment war chest of Nextdoor. This was Facebook versus Friends Reunited all over again.

So why should this worry local publishers?

Publishers have potentially missed another boat. When Mark Zuckerberg wrote his “state of the union” post on the global community and referred to the challenges of local journalism, we assumed he was ready to replace local news players. But perhaps he’s more likely to see danger in a fellow tech giant like Nextdoor with a $1b post-money valuation and a growing, grassroots social network which reaches the parts many local publishers cannot reach. For Zuckerberg too, “local civic engagement is a big opportunity”.

Meinolf Ellers at the DPA in Germany highlights this changing role of the media when he gives examples of industry innovation. He helped WEPOLITICS pivot from being a news startup, to helping regional German publishers leverage their core asset: expert knowledge of the local machinations of power. The site helps local users make campaigns, driving civic engagement in local communities. In fact, he talks about it in a case study for our upcoming course on digital business models (mini-plug for our Media Management Accelerator).

There is still a need for investigations and longer form storytelling in local journalism. We need local theatre reviewers and sports journalists. But perhaps Zuckerberg and others are just pointing out we need to be more ambitious. While Jeff Jarvis announces the death of mass media, and Emily Bell suggests tech companies should foot the bill, perhaps they are forgetting the product. Is the product “an article” or a service? Is it informing the community or engaging with the community?

Local news publishers in the U.K. are under more pressure than ever. Mergers have left the country with four super groups – Johnston Press, Archant, Newsquest and Trinity Mirror. Is Nextdoor’s rise another pressure point, or a helpful and timely reminder that local news is about personal connections and trusted sources?