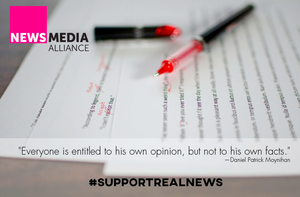 Philip Howard gave some insight into the scale of the ‘junk’ problem at a UNESCO Colloquium on in Paris last Thursday on the issue of Journalism Under Fire: the challenges of our times. Howard said there was “roughly a 1-1 ratio between professionally produced media and ‘junk’ media – meaning that for every professional article published online there is a corresponding ‘fake news’ article.”

So while there has been an explosion of fact checkers, they won’t even begin to dent the problem.

‘Fake news’ and disinformation have become the tools of populism, said UNESCO’s Assistant Director-General Communication and Information Frank La Rue. They are fuelling the regrowth of xenophobia, racism, a rising of borders and attempts to make difference between people – even on issues where there was past agreement.

“Fake news is a bad term primary because it is a trap. It is not news. Just the term generates mistrust of the press and of the work of journalists. Political leaders have started using the term against the press, which is especially serious. This is a crucial moment when we have to defend journalism. We have to promote a journalism of honesty, a journalism that is seen to build the truth,” said La Rue.

“The expression ‘fake news’ is used by Trump as a label of stories that he doesn’t like. We should take the expression back: ‘Fake news’ stories are stories that are false.” – Ginna Lomberg, Head: Foreign News, Swedish Broadcasting

“Fake news is not state-sponsored disinformation, bad reporting, a news story you don’t like or ideologically-driven news that goes against your views,” says Silverman.

To counter the damage being done to journalism by the fake news phenomenon, the News Media Alliance, an organisation representing 2,000 diverse news organisations in the United States and Canada, this week launched a national campaign #SupportRealNews. It shows the importance of real news produced by respected, trusted news organisations employing high-quality, investigative journalists.

David Chavern, CEO of the News Media Alliance, said it had become vogue to distrust and disparage the media. “But as fake news corrodes trust, we must support the real media.”

“Fake news is not going to stop. We must become an educated and discerning populous. We must subscribe to real journalism, where the stories are colorful but the news is black and white.”