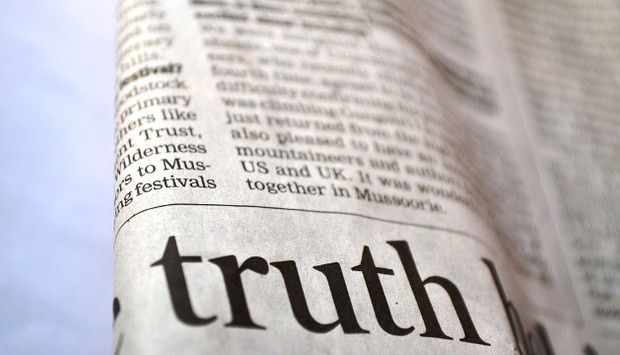 The post originally appeared here and is republished with permission.

Showing a picture of a child remarkably identical to Donald Trump, Pakistan’s Neo News channel broke the surprising news that the US president’s real name was in fact Dawood Ibrahim Khan, who was born in Waziristan and later adopted by American parents. This news was presented in traditional tabloid-style, but people who know this TV outlet say that its owner is also a proprietor of a private chain of academic institutions and that it leans editorially towards the leading religious political party. The news is, of course, false, but is it really fake?

Media outlets, mostly the bad ones, but at times also the best, have published non-truths at some point. Official “truths” dictated by governments, which can often be false, make daily headlines all over the world, as does propaganda sponsored by private interests. So how is the current phenomenon of “fake news” different? The answers may be in the way news are distributed and in the authenticity of the sources.

From time immemorial, authoritarian regimes have created counterfeit realities, but they also had to censor all alternative narratives.

Now, phony narratives created with a purpose (to install a specific fear; promote a political discourse; or make a quick buck, like the infamous Macedonian teenagers) are distributed silently, through social platforms and fabricated journalism. When confronted by traditional State “truths”, people have instinctively distrusted the source. But today people often ignore the sources of the “news” they share. Hence, the fake ones thrive in the auspicious internet environment, where there are few signs that tell us if a source is authoritative or trustworthy, as was concluded during a conference on the subject at Wilton Park, in Britain. And what is even more of a threat to journalism, is that there are truly shady interests committed to news forgery. For example, in the US elections, and increasingly so in the French and German campaigns, anarchic hackers, mischievous gamers, paid state trolls and far-right movements launch coinciding attacks, despite having diverse motives.

There are no simple solutions. As Dana Boyd of the research center Data & Society put it recently, publicly debunking false news could spark more circulation of false news and even more distrust of the media. Furthermore, whether or not these fringe-opportunistic media are effective in actually manipulating voters has been questioned by recent studies, as reported by the Poynter Institute.

There is a steep learning curve for media and journalism initiatives that reflect reality by verifying facts, contrasting sources and following a set of ethical guidelines.

Being at the center stage of the controversy, amidst the current nationalist revolt wherever it is taking place (from the US and Ecuador, to the Philippines and France), not only hurts their credibility, but their legitimacy is also damaged by the fact that editors have to dance to the ultrafast beat of social platforms and search engines. And as most stories reach audiences via social networks, they are often read as disassembled standalone pieces (texts, videos, photos, headlines, links) losing design, context, transparency, and hence, credibility.

The good thing about the “fake news” scandal is that it made evident, for both journalists and global social platforms, that properly answering the public’s need to know what is really going on in their communities takes more than just disseminating journalism under a known brand. Therefore, it is crucial to learn how to narrate reality and be credible in this new complex ecosystem, where quality journalism, as stated by Emily Bell, director of the Tow Center for Digital, is “a thin thread in a vast new global tapestry of conversation and information, but that thread keeps the whole cloth together”. Through this learning process, some of the first interesting collaborative experiments in journalism are being born today.

The exponential growth of fact-checking organizations is a direct attempt to give internet users additional tools for discerning the real from the fake. Increasingly, fact-checkers, now organized in an international network, are starting to work hand-in-hand with tech giants with this same goal. Google is working with several fact-checking initiatives around the globe to probe the veracity of news. Facebook is starting to collaborate with media and fact-checkers to flag false stories and penalize them in their news feed.

In France, where far-right National Front candidate Marine Le Pen is leading in some polls and there is an unusual growth of websites aligning in what is called “la fachosphère” (fascist sphere), journalists are trying in different ways to bring transparency to the electoral debate. One of the projects led by the First Draft News alliance of media from the US and the UK, together with 17 French media outlets, Google and Facebook, created a platform called CrossCheck, which launched this February in Paris. On it, specially trained students will flag suspicious stories and “participating newsrooms will then summarize and add content to each claim, creating a live feed of shareable report cards”. Each news media will decide whether to publicly alert readers about fake content or not, but it will make sure that, at the very least, its own journalists will not fall into clickbait traps or fabricated stories.

The winner of Google’s Digital News Initiative, Le Monde’s Décodex, a project launched in mid-January, is building a database of websites (it already has about 13,000 URLs) on politics and the elections. Users can download a browser extension and every time they read a story on a particular site, they get more information about the sources of the content they are consulting: if it mostly circulates false and grossly distorted news; if it is set up to attract clicks to sell advertising; if it is satirical and humorous news; or if it is a legitimate journalistic outlet. So far, it has had many grateful customers, but many others are questioning Le Monde’s authority (being an establishment newspaper) to judge peers.  It is adjusting its classification and trying to invite other media to join the effort.

By making the checking of sources their central goal, rather than debunking specific stories, they are holding on to what seems to be the paradigm of journalism in the Internet era: transparency. Paradoxically, the confusion created by today’s excess of information seems to be clarified only with more information. In Germany, the non-profit organization Correct!v has teamed up with Facebook to enable users flagging unreliable stories as false.

These are only a few of the most recent examples of how journalists, fact-checkers and social platforms are making the first steps to help people choose the journalistic feed that will enable them to understand what happens and make better decisions. These are still baby steps, not lacking in controversy. And there are other efforts to create participatory self-governing mechanisms to check information on the web (à la Wikipedia) or to signal good journalism. The hope is that many others in the world will advance and improve them.