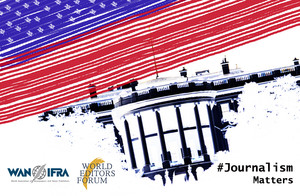 We are writing on behalf of the World Association of Newspapers and News Publishers (WAN-IFRA) and the World Editors Forum (WEF), to express our deep concern at recent comments made by you and your administration targeting news media. Combined with the exclusion of selected news outlets from a recent White House press briefing, we fear that the overall climate for media freedom currently being fostered by your presidency seriously jeopardises the on-going ability of a free press to hold power to account in the United States.

Mr President, we are dismayed to hear your frequent comments since being elected to office disparaging media and targeting individual outlets – seemingly for no other reason than personal retribution for critical reporting of you or your administration. We remind you that it is the role of a free press, protected under the 1st Amendment of the Constitution of the United States of America, and Article 19 of both the Universal Declaration of Human Rights and the International Covenant on Civil and Political Rights, to subject government and the actions of elected officials to the highest standards of scrutiny and accountability.

We highlight one particular comment, among many, that you chose to articulate via the Twitter platform, the sentiments of which you then repeated during a speech to the Conservative Political Action Conference held on February 24th 2017:

“The FAKE NEWS media (failing @nytimes, @NBCNews, @ABC, @CBS, @CNN) is not my enemy, it is the enemy of the American People!”

Such an accusation is immensely damaging on a number of levels. Firstly, ‘fake news’, more appropriately termed ‘disinformation’, is indeed provoking a crisis among professional news media institutions throughout the world. Addressing the question of how the professional media responds to the growing phenomenon is one of the highest priorities for our members. It is deeply unhelpful, however, to see the President of the United States of America fuelling antagonism towards news outlets by labelling them – misleadingly – as ‘fake news’. In reality, the organisations cited by you in this particular tweet adhere to the highest professional and ethical standards, and it is disingenuous to suggest they contribute to the current ‘fake news’ epidemic.

The effects of deliberate attempts to spread disinformation have been seen to influence election processes, alter policy, and surface unprecedented hatreds and growing resentment between peoples; all of which contribute to the division of communities. The causes, as well as the appropriate responses required to counter disinformation are being analysed by newsrooms globally, particularly in terms of what this means for professional media and the practice of journalism.

The media will find a response that continues to valorise the work of professional journalists and allows the public to filter facts from fiction. However, differentiating between those that apply such standards and the organisations, blogging sites, social media commentators, etc., that do not, is very much part of the core challenge ahead regarding tackling disinformation.

While in no way suggesting that media is, or should be, beyond criticism we point to the rigorously established forms of redress and retraction available to all who feel wronged by the actions of professional media organisations. When this fails, our democratic societies have established legal recourse to set limitations on freedom of expression, as measured against appropriate international standards. The checks and balances provided by an independent judiciary and an independent media are therefore essential to maintaining the correct intersection between the application of laws and the exercise of rights in any political society.

Such a system as exists in the United States is one to which many other countries aspire, and that professional organisations such as WAN-IFRA frequently cite as a model on which to draw example when attempting to strengthen frameworks around media in the world’s most challenging regions. The US is looked to as inspiration for many around the world, particularly in terms of governance standards, the application of the law, and fundamental freedoms as upheld in the Constitution: it is therefore essential for the US to maintain its high regard for these rights and to do its utmost to guarantee their protection. Failure to do so risks weakening these values for US citizens (and included in this, media) at home, as well as inspiring authoritarian regimes abroad to weaken their commitment to democratic values.

Mr President, recent events appear to place all of this in jeopardy. We must also take firm exception to your accusation that media is the ‘enemy of the American People’. At a time when journalists and news media are being increasingly targeted for violent reprisal (and, in too many cases, often deadly retribution as a result of the work they do), the tone of your comment is highly inflammatory. In a deeply divided America, a country facing many challenges on numerous fronts, the need for a vocal and critical press to act as the watchdog over essential freedoms on behalf of society seems more urgent than ever.

We feel strongly that the President of the world’s leading democracy should welcome and encourage the kind of rigorous self-criticism a free media upholds as a means of ensuring the highest attainable standards of governance. Media should not be seen as a hindrance to achieving this, and therefore we urge you to reconsider the language you use in order to better reflect this and to ensure the channels of power remain open and accessible to all media.

WAN-IFRA was founded in 1948 by the remnants of the independent European press who recognised media had – in light of the rise of violent populism and the horrors that it brought during the Second World War – to a large extent failed in its responsibility to protect democratic values on the continent. The organisation based its core principles around the notion that a free, independent press is the cornerstone of democratic society, and that without a vibrant, financially healthy and courageous media our communities would again be left exposed to the kind of tyranny and persecution witnessed in the lead up to, and during the years of conflict that so ravaged the world.

The association quickly grew from its initial base, and today embraces some 18,000 members from over 120 countries worldwide. Many of our early, most vocal supporters were – and indeed remain so today – from amongst the US press; the very members for whom we feel the urgent need to speak out on behalf of in this letter.

In this context, and given the pressing need to redress the attitudes of the current administration towards the press, we invite you to meet with our representatives at your earliest convenience to discuss ways of rebuilding a professional relationship. We firmly believe, Mr President, in the importance and value that a vociferous, critical press brings to democratic society; we would very much welcome the opportunity to convince you likewise.