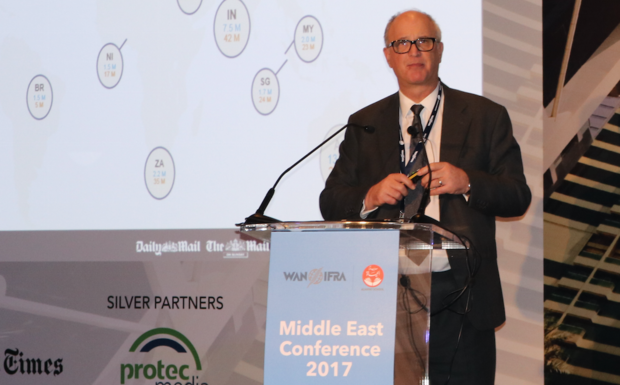 Beatty, CEO of dmg media, publishers of the Daily Mail and MailOnline, the world’s largest English-language newspaper website, described how his company is continuing to grow its brands.

At the core is the content, Beatty said. “At MailOnline content will always be king,” he said adding that context is queen.

That content is created by MailOnline’s more than 800 journalists who work only for MailOnline.

Offering some details, Beatty said MailOnline is updated at least every 30 minutes – 24 hours a day, seven days a week. MailOnline has a truly global audience with some 245 million unique views each month. It has 6 million unique visitors daily, and the average visitor stays on the site for 7 minutes. More than half of the traffic (52 percent) is direct.

“Investment in storytelling is the thread that ties our past to our future.” – Kevin Beatty

“The power of our storytelling reverberates around the internet faster than ever before,” he said, but at the same time, there are substantial challenges to the business side. For example, he noted that 20 percent of web users in the UK use ad blockers.

Nonetheless, he pointed out, there are also opportunities. “There is strong evidence demonstrating the effectiveness of newspapers on the ROI of advertising campaigns, amplified in combination with digital media,” Beatty said.

For example, he noted that newspapers boost total campaign ROI by 2.8 times in retail, by 70 percent in automotive and by 5.7 times in finance.

“Tapping into our consumers’ imagination through data and insight, we challenge ourselves to stay ahead and create new ways to engage audiences,” Beatty noted.

“Combining best-in-class tools with proprietary ones under one seamless interface, we can build bespoke audiences for our advertising partners to maximise their campaign effectiveness and ROI,” Beatty said.

Looking to the future, he said: “We see more success ahead than behind.”