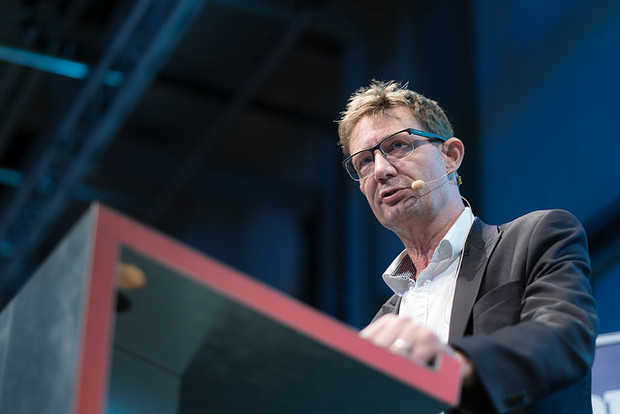 Photos by Dan Taylor, heisenbergmedia, for WAN-IFRA. All rights reserved.

Newman is a Research Associate at the Reuters Institute for the Study of Journalism at Oxford. Earlier in his career he spent more than a decade at the BBC, where he helped create the BBC News website.

A key point to remember, he said, citing the Reuters Institute’s “The Future of Online News Video” report from last year, is that video consumption varies greatly from country to country.

“It’s higher in places like the United States, and quite low here in Denmark, actually, only around 15 percent. This is news video – if you include soft entertainment, things are much higher. Despite the hype around video, the majority are still not using news online video,” Newman said.

At the beginning of the year, Newman and the Reuters Institute staff talked with dozens of editors around Europe about video and what they planned to do about it this year. They also ran focus groups with users to get their views on video.

The first myth he exploded is that audiences are demanding more and more video.

“A lot of the growth that we have seen has come from the supply side and through technological changes, and not by audience demand,” he said.

In fact, it turns out that most people still prefer text to video.

“Something like around three-quarters to 80 percent said they mostly consume news in text. And for most people in most cases, video is providing something supplementary,” Newman said.

“When we asked people about why they weren’t using more videos, they said it was about being quick and convenient, which is what text offers them,” he added.

He noted that one consumer told the researchers, “If I have 30 seconds to get actual news, I don’t want to spend that 30 seconds going through an advertising video.”

Those pre-roll ads, said Newman, are absolutely despised – and that feeling is growing.

“We did some focus groups again this year where people were really vitriolic about pre-roll ads, much more than the previous year.” – Nic Newman, Reuters Institute for the Study of Journalism at Oxford

He then pointed out the contrast between Facebook’s use of video and common practice on news publishers’ websites.

“Facebook provides an incredible user experience. It just plays, so it doesn’t get in the way of content, [versus] websites where people get very upset by these 30-second pre-roll ads. So pre-roll ads are one of the reasons why video is growing very slowly on those sites.”

Another myth Newman blew up is that young people are more inclined to consume video than older people are.

Publishers’ plans for video this year

Addressing publishers’ stated intentions, Newman said, “At the beginning of the year, they were looking at short social video. They were looking at live video and some to documentary and to virtual reality,” he said. He added, “I think a lot has changed, even since January, in terms of strategies. If you look at short-form video, as more people pile into that market, the opportunities to make money out of it, it’s going to get more difficult. The whole notion of short-form video is changing very significantly.”

The hazards of “live” video, as most people have heard in recent weeks, have necessitated a rapid rethink by many publishers because of crimes, even murders, being livestreamed, as well as a number of suicides.

He also pointed to the growing interest in virtual reality at publishers such as The Guardian and The New York Times, who are trying to figure out how the market will develop. (The Reuters Institute has just released a new report titled “VR for News: The New Reality?”, which can be downloaded for free here.)

“There’s lots of experimentation, and publishers are still trying to come to terms with what works. Current revenue models are looking at sponsorships, not least from the likes of Facebook and Google, which are very desperate for good content, but the problem is they’ll only pay for the very best brands, so it’s going to be much harder for smaller publishers, which is one of the problems generally with video,” Newman said.

What should publishers do?

So just where are the opportunities in video?

“I think the first thing is that publishers have often been too quick to listen to the hype and jump in rather than listen and find out what audiences actually want.” – Nic Newman, Reuters Institute

“There are some real opportunities for video, and some new ways of telling stories, but it’s about understanding what those needs are and then when they want it… and then how do you satisfy your existing users,” Newman said. “And if you’re trying to attract new users, what’s the role of video in that mix? Then how does the investment in video stack up against all the other things you could be doing? What is the opportunity cost?”

He offered participants these takeaways:

See more coverage from the conference at blog.wan-ifra.org as well as on Twitter at https://twitter.com/DigitalMediaGLO and the hashtag #DME17