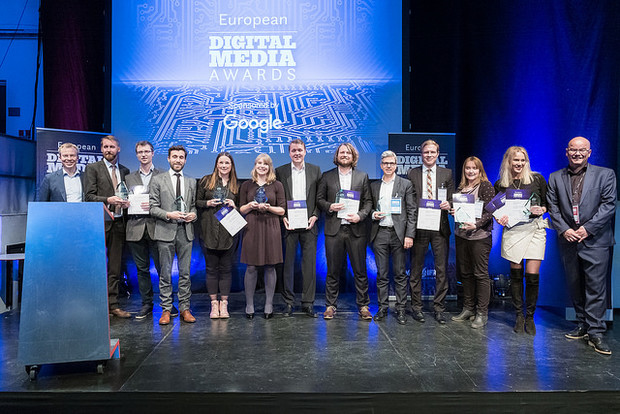 Photo by Dan Taylor, heisenbergmedia, for WAN-IFRA. All rights reserved.

WAN-IFRA’s Digital Media Awards are the most prestigious recognition of best-practice innovation in digital publishing worldwide. The awards are presented in several regions around the world during the year.

Each year, all regional winners are subsequently entered into competition for the annual World Digital Media Awards, which this year will be presented at WAN-IFRA’s Digital Content Expo in Berlin, 10-12 October.

European digital media are some of the most creative in the world, and there is no better showcase for them than the European Digital Media Awards. From venerable print publications to newly-formed pure players, the very best have been put forward for the awards.

The winners of the 10th annual awards, which were sponsored by Google, are:

Constant investment of resources and imagination have paid off once again for the Guardian News & Media, UK, and the flagship site theguardian.com, which won the category. The judges commended its clear usability and organization, its rich information, and its inherent multimedia values.

A Special Mention went to The Financial Times, UK, for the new FT.com, not least for its particularly well-thought out adaptation to mobiles and consistent usability across all platforms.

Scandinavian entries dominated the Lifestyle category this year, and the winner was the Swedish evening tabloid Expressen for its feature on “Zlatan Ibrahimovic – The Boss,” which was praised above all others for its “excellent navigation and content.” See it at: http://www.expressen.se/sport/fotboll/chefen/ .

3. Best Use of Online Video

A lot of publishers have been looking at how to make the most of 360-degree video and its potential for immersive storytelling. This year’s winner, Guardian News & Media, took the video prize for using immersive video to put users slap in the middle of somewhere they didn’t want to be with its project “6×9: A virtual experience of solitary confinement.”

“An incredible example of groundbreaking storytelling,” said one judge, while another concluded, “It moves the state of the art forward.” See it at: https://www.theguardian.com/world/ng-interactive/2016/apr/27/6×9-a-virtual-experience-of-solitary-confinement .

The Special Mention also went to the Guardian for “Anywhere but Washington,” which led one judge to conclude, “This entry shows what a small but powerful and experienced team can accomplish. Each piece told a different story but all are connected at the same time.” See it at: https://www.theguardian.com/us-news/series/anywhere-but-washington .

Never one to shy away from the tough stories, this year’s winner, BBC News once again demonstrated the power of data visualisation with its project “Life and death in Syria,” which aims to bring the conflict’s toll to life with a mix of data visualisation and simple, stark facts. See it at: http://www.bbc.co.uk/news/resources/idt-841ebc3a-1be9-493b-8800-2c04890e8fc9 .

The Special Mention in this category goes to Guardian News & Media, UK, for cleverly using data visualisation to shine a light into “The dark side of Guardian comments.” See it at: https://www.theguardian.com/technology/2016/apr/12/the-dark-side-of-guardian-comments .

Apps are in the front line when it comes to mobile news, so particular congratulations go to the winner, which was the leading German app development agency, APPSfactory GmbH. They won the award for the Tagesschau app, run by the German public national and international television news service produced by the editorial staff of ARD-aktuell.

The Special Mention for the category went to the app of Independent.ie, the daily news service of Independent News & Media, Ireland.

Associated Newspapers’ Metro took the honours this year for “11 versus 11.” A personalised football news service, it was praised by judges for presenting stories in an engaging way that one judge admitted risked becoming “part of our lives.” See more at: https://www.11versus11.com/ .

Special Mention was reserved for Aller Media of Norway for its work in turning women’s title KK into a mobile service to accompany its users through their day, and their lives.

“One of the most impressively executed long-form projects I have seen” was one judge’s verdict on this year’s winner, Dagbladet of Norway for “The baby in the plastic bag.” An impressively executed example of long-form journalism that pulls the reader into a project that consists of 200,000 characters and 25,000 lines of code. See the story at: http://www.dagbladet.no/spesial/the-baby-in-the-plastic-bag/.

Dagbladet also received the Special Mention in the category for its Readers Critics (Leserkritikk), which got particular plaudits for its intuitive approach.

Axel Springer Akademie of Germany was the winner for “Sachor jetzt!”, a story of meetings with Holocaust survivors told in the form of 10-second videos, described by one judge as “an exceptional project. It demonstrated innovation in using social media to tell stories.” The power of the story and the mastery of the form prompted another judge to sum it up as showing “a deep understanding of the platforms that the team was using. The storytelling was impeccable and the staff dynamic and informative. Congratulations!” See more at: http://sachor.jetzt/en/the-project/ .

Verdens Gang of Norway received the Special Mention for a much more light-hearted exercise in engagement, “The Icelandic name generator,” which can be found at http://www.vg.no/spesial/2016/islandsk-navnegenerator/?lang=en .

The oldest women’s title in Norway showed it has a full hand of new cards as Aller Media’s www.KK.no won the category with a visually compelling full-screen approach. One judge said, “The identity of the image, the use of different media digital channels and the interface are excellent.”

Special Mention went to El León de EL ESPAÑOL Publicaciones for Become Lion, which demonstrated that even in the most modern context a clean and classical approach can have great impact. Strong black and white videos were the signature of this campaign, an approach dubbed as “clean and elegant” by the judges.

Digital Media Europe continues through Wednesday, 26 April, in Copenhagen. Follow the conference on Twitter at https://twitter.com/DigitalMediaGLO and the hashtag #DME17