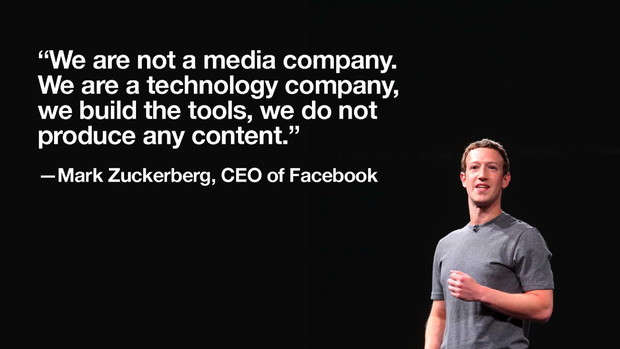 In a series of meetings around the world, some public and some closed, Facebook executives have been meeting journalists and editors to discuss its massive and still-growing influence on the news ecosystem.

Facebook has become the largest news publisher in the world — its algorithms decide what’s news to 1.86 billion users monthly — but for years it remained secretive or inaccessible. Finally, the company seems to be willing to open up and acknowledge, to some degree, its power over consumers, the advertising market, and other publishers.

With the launch of its Journalism Project, Facebook hints that it is ready to accept at least some responsibility for how it wields its influence and how it handles unintended consequences of the platform’s design and policies, such as the rise of fake news.

A friend, an enemy, or both?

Still, publishers cannot agree on the nature of their relationship with Facebook. Is Facebook a friend or an enemy? Definitions are difficult, because Facebook plays so many roles. Also, publishers themselves are Facebook’s:

CEO Mark Zuckerberg believes Facebook is a new kind of platform and envisages it as a “social infrastructure” for a globalised world. Anyway, Facebook’s business model is similar to that of many media companies: it aggregates audiences and sells their attention to advertisers. In 2016, Facebook made US $27.6 billion in advertising revenue.

So from a business standpoint, Facebook is a direct competitor to all publishers that pursue a business model based on digital advertising revenue, and it’s winning.

Together with Google, it controls 46% of global digital ad spend. The figure rises to over 70% in top markets such as the USA and the U.K.

Facebook is disrupting publishers’ businesses with its innovative “platform” business model, in which it acquires user-generated content in exchange for publishing tools and access to audiences. It unbundles content from publishers’ and brands’ own websites in exchange for branding opportunities, and a share of advertising revenue and production fees for the lucky few.

Last but not least, Facebook lets consumers avoid visiting publishers’ websites and apps, searching for content and browsing through their ads. It saves users time and effort by aggregating all that content into a feed that is accessible in a single app or on a single website. It filters both stories and ads to better fit individual users’ interests. That convenience is what has made Facebook so powerful.

Collateral damage: no exposure to ads

The collateral damage is that consumption of publishers’ content is made possible without seeing the ads that are supposed to fund that content. That is one of the unintended side effects that Facebook is struggling to mitigate. At meetings with publishers, it claims to want to improve its monetisation products such as ads within Instant Articles, or introduce new opportunities – mid-roll ads in videos, for example.

Its reported cost of revenue in 2016 was just $3.7 billion, or 13% of total revenue. By contrast, analysts estimate that YouTube shared with video creators more than half of its revenue of $9 billion in 2015, and Spotify paid music labels 80% of its revenue of $2 billion.

Nonetheless, publishers cannot expect a miracle. Even if Facebook volunteered to, or were forced to, give away every cent of the money it earns, the revenue would be spread among the 50 million page publishers currently on the platform. That means each publisher would get a check for $552. You could bleed Facebook – but it would hardly save anyone.

A recent benchmark study of 17 top U.S. publishers, including big players CBS, ESPN, NBC News, The New York Times and USA Today, found that revenue from content distributed on platforms such as Facebook, Twitter, Snapchat and YouTube averaged $1.3 million per company per month in 2016. That would be $15.6 million per year – far from enough to fund their newsrooms in New York.

What if an advertising-based business model is not sustainable for digital media unless they reach billions of users? What if publishers need to find a different source of funding?

Some publishers, like The New York Times, have already noticed that reaching millions of users online no longer qualifies them as true mass media, since platforms reach billions. In the face of that, increasing the reach of their websites by 10 million or 100 million users makes little real financial difference.

Thus they need to focus on increasing the revenue earned from each user, not just the number of users. The average annual revenue per non-paying visitor to The New York Times – the one that is monetised by means of ads – is just $1.70. By contrast, a site visitor turned into a digital subscriber brings $125 per year.

In 2016, The New York Times made more money from its 1.85 million digital subscribers than from all of its 122 million non-subscribing visitors.

In its search for potential customers, the Times uses Facebook heavily, but in a different way. Instead of a distribution channel, it has become a fishing pond for the Times. The platform’s e-commerce tools may be more useful in the subscription-first strategy than those aimed at luring publishers, like Instant Articles. By moving away from a display-ad-based business model, the Times has reshaped its relationship with Facebook.

Who else can pay for content? Advertisers found value in the storytelling expertise of the Times’ copywriters. The paper’s branded content shop, T Brand Studio, made an estimated $60 million in 2016. With its targeting capabilities and virality phenomenon, Facebook was useful for expanding the reach of the campaigns.

In 2016, the Times made $77 million from syndication, events and e-commerce. The Wirecutter, a product recommendation site acquired by the Times, publishes so-called shoppable content that allows readers to buy all the reviewed products, and the site to get a cut from online retailers. Recipes in the newspaper are making money too – with a few clicks, readers can buy the necessary ingredients from Chef’d, a home-delivery grocery partnering with the Times.

This year, the Times gave its fans an opportunity to spend more with the paper, to sponsor subscriptions for students. Within a month, 15,000 individuals donated enough to fund access for 1.3 million students.

What all those new business models have in common is that they mean the publisher moves away from being a content supplier and competitor to Facebook et al, and toward using the platforms’ strengths to increase its own non-advertising-based income. For the Times, they promise more revenue than any income the platforms reportedly shared with the publisher in 2016.

Grzegorz Piechota, a Research Associate at Harvard Business School,  studies patterns of digital disruption across industries. Piechota is an editor and news media executive with 20 years of experience. He began his career at Poland’s Gazeta Wyborcza (Agora) as a reporter, rising to news editor and vice president of the Agora Foundation. In September 2017, he moved to the University of Oxford as a senior visiting fellow at the Reuters Institute for the Study of Journalism to examine the impact of digital platforms on the paid-content models of UK and international news organisations. Greg is working on a report for WAN-IFRA on the Facebook revenue issue for publishers, and will take part in a panel discussion on the topic at Digital Media Europe. (Photo: Andrea Bruce, Noor Photo Agency)