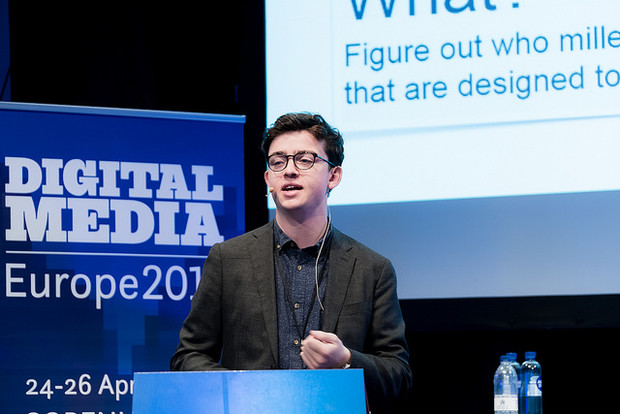 Photo by Dan Taylor, heisenbergmedia, for WAN-IFRA. All rights reserved.

Recognising that people often imagine an Economist reader to be a stuffy, old, wealthy male, The Economist has been actively working to change that perception and broaden the brand’s appeal to younger audiences.

Waddell, himself a Millennial, is Social Media Writer and Managing Editor of The Economist on Medium. The Medium platform is a place where the venerable title can experiment a bit with the brand and its content in ways that the publication feels less free to do on other platforms, he said.

“We are not expecting it (Medium) to drive huge droves of new subscribers, but it is a great place for us to run little experiments, because The Economist is a very forward-looking place in terms of social and digital, but we still have to prove our ideas work before rolling them out on Economist.com,” Waddell said. “And what Medium did was provide this great sandbox where we have a community of young, engaged, intelligent and curious followers who are really receptive to the kind of stuff that we want to do.”

He added that broadly speaking, The Economist focusses its efforts on Millennials around two key areas: “Where” and “What.”

“We are basically constantly reassessing whether we are in the right place at the right time, taking part in these live, ongoing conversations and making our voice heard in spaces where we know Millennials like to hang out,” Waddell said.

“It’s also important to know that ‘Where’ cuts both ways,” he added. “As well as wanting to be in the right place at the right time, we also want to avoid being in the wrong place at the wrong time. So, when the data show something isn’t gaining traction, we cut it.”

He offered two recent examples of where the Economist has done just that: After experimenting with both the Tumblr and Pinterest platforms, The Economist withdrew from both. “While we want to make sure that Economist content is appearing in all the expected places, the sort of community we were reaching on Tumblr was not really one we were interested in, so we cut it,” he said.

In the case of the second area, “What,” Waddell says The Economist team regularly asks, “What can we make for Millennials that is specifically designed with them in mind? What kind of products can we create?”

Naturally, “Where” and “What” are also interrelated, and as Waddell noted, “There’s no point in making great products and then putting them in places where no one is going to look at them. And there’s no point in finding a great venue for a product that hasn’t been custom-built for the people who we want to reach in that environment.”

Reaching out with Line

“The context for this is that we knew that 10 percent of The Economist readers were in Asia, but people there were signing up for our digital content faster than basically anywhere else in the world,” he said.

“We also knew that more than a billion people use messaging apps across the world each month and studies have shown that young people, particularly in Asia, spend as much or more time on them as they do on social networks,” he said. “Enter Line. Line, as many of you I’m sure will know, originated in Japan, and it has hundreds of millions of users worldwide.

“What was important for us about it was that 95 percent of female smartphone users aged 10 to 19 in Japan use Line – 95 percent!” Waddell said. “And it’s 89 percent for male users in the same age group. That was a conversation we wanted to be a part of.”

“So we started using it, and suddenly we’re reaching young people in not just Japan but Saudi Arabia, Myanmar, South Korea, Indonesia and Cambodia. Those are places where we were never involved in conversations before we struck gold with Line.”

Again, Waddell noted that it’s about offering a diverse menu of different types of content and changing people’s perceptions, getting them to think and say: ‘I didn’t realize The Economist wrote about that.’

“I can’t give you the exact statistics on how well it’s doing, but I can tell you it’s extremely encouraging.”

In terms of “What,” Waddell says The Economist looks at “What products can we create that are tailor-made for Millennials in order for them to stop having misconceptions about us?

“First, we’re going to have to figure out what Millennials want,” he said. “The big buzzword here is authenticity. They want really authentic messages, authentic brands and authentic interactions. They also want to feel that we genuinely care about issues that are relevant to them.”

The second key issue is transparency: “They want to see what’s going on behind the scenes,” Waddell said. “This is particularly germane at a time when, as many people know, trust in news media is really at an all-time low. If we’re going to convince young people that we are trustworthy, we have to show our workings. We have to expose the inner mechanics of what it is we do.

“And third, we have to have interactivity. Millennials want to have their voices heard. We have strong feelings about the world, and we want to be able to express them and also people’s responses to them,” he said.

A couple of ways The Economist is trying to do those things on Medium is through a new content thread area called “Correspondents’ Notebooks,” which allows journalists to write first-person stories about subjects that matter to them.

Another idea is to try to explain how The Economist comes up with its editorial articles, “Leaders,” as it calls them, and how they are written.

Ultimately, Waddell said, the answer for young people about who reads The Economist should be, “Well, me!”