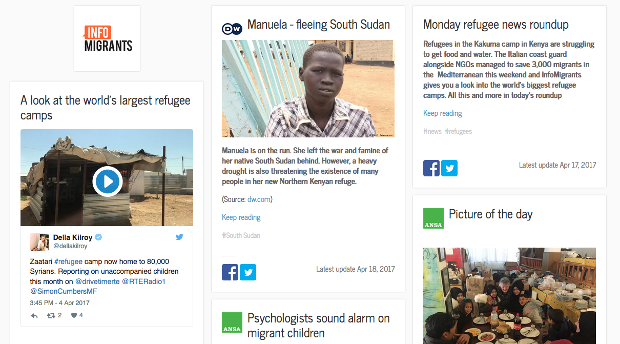 German broadcaster Deutsche Welle, France 24’s parent organisation France Médias Monde, and Italian press agency ANSA launched the news platform InfoMigrants at the end of March. Aimed at people from the Middle East, Afghanistan, Pakistan and Sub-Saharan Africa, especially those considering fleeing to Europe, its goal is to explain the perils of the journey, and provide refugees and migrants with verified and balanced information.

A source of unbiased information

“We want to inform about the challenges of fleeing a country without sugar-coating or dramatising anything. It’s about providing realistic and objective information, and describing the situation as it is,” Deutsche Welle’s Head of Online Verica Spasovska told WAN-IFRA.

“Many that decide to flee are following rumours and myths often spread by human traffickers. We want to fight this with facts.”

The idea for the project was born in 2015, a few weeks before a picture of the body of three-year-old Syrian Alan Kurdi was published, which sparked international outrage over the refugee crisis.

“Migrants don’t have much choice of how to inform themselves, and believe the wrong information given to them by smugglers or that they found on the internet and social networks,” said Amara Makhoul, chief editor of the project and Deputy Senior Editor at France 24.

“It leads to their choices only being made on that basis. InfoMigrants has the ambition to give them more balanced information, as close to the truth and to the reality in Europe and in the countries they cross as possible, so that they have all the keys to make a reasonable choice.”

Each of the partners set up a dedicated editorial team, which started to work on the project’s website and social media presence in January.

Available in English, French, and Arabic, the platform contains news, features, and practical advice aimed at refugees and migrants. In total, around 20 journalists are involved in the project. In a daily conference call, the coordinators of each team discuss what’s on the agenda, and decide which stories to cover.

“It’s a challenge to be building a website with three teams in three different countries, but we’re happy to face that,” Makhoul said.

“It works quite well, and we’re finding that the dialogue is enriching our work and our production because we all have different visions of the crisis but also of the way we can deal with it as journalists. All our differences put together makes the dialogue and the discussions about work more constructive.”

Each partner publishes around three to four pieces of content per day, around half of which are specifically produced for InfoMigrants.

Researchers from the UK-based Open University are tasked with monitoring and evaluating the project. By setting up panels of migrants, and visiting refugee camps, they try to determine whether the content published on InfoMigrants reaches its intended audiences, and is useful to them. The findings are published in a monthly report given to the media organisations to help them adjust their strategy accordingly.

They started their work in January by analysing content in the archive to determine whether there was a good balance between information, practical advice, or news stories.

“The editorial line is ambitious, and we always have to keep in mind that our job is not to encourage nor to discourage people from coming,” Makhoul said.

“The idea is really to inform in a neutral way, and to give them the keys to make their own choice, and not to be influencing them.”

In the final version of the site, which is set to go live in May, users will be able to switch between the different languages, and navigate between different sections such as “News”, “Features”,, “Personal Stories” or “Understanding Europe”. It will also feature a prominent button calling for testimonies from migrants and refugees.

“It is a participative project, they can send us their personal stories for us to verify and publish,” Makhoul said.

“It’s a way for them to also give advice to other migrants who are still in those countries. They have already begun to contact us via Facebook, sending us stories, testimonies, pictures, videos and questions. There have been many questions about practical information. Another goal of the project is to build a community around it. The more they interact with us the more our offer will be fitting.”

The extent of false information

The use of social media is central to the project’s strategy. Aside from the established Facebook, Twitter and Instagram accounts, the teams will also set up a Whatsapp channel coinciding with the launch of the final version of the website.

“Migrants have the habit of getting information on these social networks, so we have to be present where they are searching and looking for news,” Makhoul said.

“We’re trying to be a voice other than the smugglers’ or other false information circulated on these networks.”

Back in 2015, InterNews, Translators Without Borders and ActionAid set up the Mediterranean Rumour Tracker project in a bid to document and fight the extent of false information circulating among migrants and refugees.

Chronicled in 40 issues spanning a year-long period, the rumours collected by fieldworkers range from France refusing to accept refugees to Germany taking away children from their families if they leave the house unsupervised. To counter these rumours, answers and verified information are published on Facebook pages as well as a dedicated website.