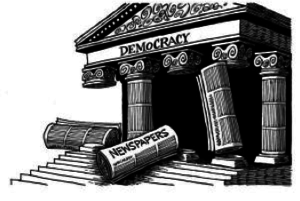 The rise of identity politics as a challenge to representative democracy was the theme of the opening session of the UNESCO colloquium Journalism under Fire: Challenges of Our Time that was held at the UNESCO Headquarters on 23 March.

Brexit, the election of President Donald Trump in the United States and the current rise of populism in Europe are events that have quickly changed the political climate in the course of the last 12 months. According to Yascha Mounk, Lecturer in Government at Harvard University, there has been a tendency to think that 2016 was a “cursed” year or that the recent political events were the effect of the 2008 economic crisis on the public debate.

However, in his opinion, decades of warning trends could have predicted these events. Today, people attribute a decreasing importance to the value of living in a democracy. “This is not only the result of social media, but a sign of something much more important: a political system that has failed to deliver a self-identification with democracy, which is what make people think that it is a good thing in the first place,” he says.

The current rise of populism in many parts of the world should be put in the context of an erosion of confidence in democratic institutions, combined with stagnation in the standard of living. The media sphere is not exempted from this ongoing crisis in trust.

“There are people who no longer believe in democratic institutions, nor in journalists,” claims David Levy, Director of the Reuters Institute for the Study of Journalism at Oxford University.

This mistrust in journalism is linked to what is perceived as a failure of journalists to deal with the ongoing political crisis, giving fuel to the expansion of alternative media. “There is a need to recognise this divide in society and how it is linked to the fast spreading fake news,” Levy confirms.

Although “fake news” is not a new phenomenon in itself, it is experiencing an exponential spread due to the conjunction between Internet and identity politics, where it has become the prime tool for populist movements.

1:1 ratio of professional to fake news

Philip Howard from the Oxford Internet Institute explains that during the Brexit debate, the “leave” campaign was twice as loud as the “remain” campaign. The same phenomenon could be observed during the recent elections in the United States, with the aggressive online content of the Trump campaign. “Today, there is roughly a 1:1 ratio between professionally produced media and ‘junk’ media online, meaning that for each professional article there is a corresponding ‘fake news’ article,” Howard explains.

The old business model for media has collapsed, and the social media is replacing the traditional format for news. Independent media expert Henrikas Iohoavitchious claims that it is becoming more and more difficult for journalists to fulfil their traditional role as a “fourth power” and a “watchdog” of democracy in the digital age. “In its essence, the rules of journalism are simple: report on real facts, search the truth and give an opinion. Journalists have a hard time doing this today,” he says.

Social platforms are easily abused as platforms for hate speech because they are not subject to the same kind of press laws as the traditional news industry, says Paul F. Nemitz, Director of Fundamental Rights and Rule of  Law and Director-General for Justice and Consumers at the European Commission. “Old laws from the beginning of the digital age protect tech companies from the responsibilities of news companies, meaning that they are not subject to the same obligations concerning hate speech,” he clarifies.

Threats from the left, too

Yascha Mounk confirms that the rise of social media has made it easier for the political far-right to bypass semi-liberal consensus and spread radical ideas through social media, as the example of the extreme right Breitbart News Network. However, challenges not only come from the far-right side of the political spectrum: “Threats also come from the left, which is arguing against freedom of speech because of the inherent danger of certain ideas,” he explains. This poses another democratic challenge: despite their dubious content, it is difficult to exclude certain ideas from the public sphere, even as a “legitimate defence” of democratic values.

Amira Yahyaoui, Founder of the Tunisian NGO Al Bawsala, says that it is important to treat the cause from the root: “We need to stop the leak and not just the water. It is not possible to cut every ‘fake news’ that is out there or to control the online content,” she says. She reminds that social media is not inherently good or bad, and that these platforms allowed for political change during the initial phase of the “Arab Spring,” permitting young people to develop political identities online that were inconsistent with the political message transmitted by the state-controlled media. “There is no question that social media played a more important role than journalists in Tunisia during the revolution,” she says.

After Brexit and the election of President Trump, there has been a switch in the way that social media is perceived with more focus on its dangers such as “fake news.” For Yascha Mounk, the consensus was too simplistic both now and then. “By then, social media was a means to disrupt the political system and a way of communication for people with ideas but no forum. Today, it has also become a platform for delivering a counter-message that can be used to create instability in a political system. This can be good in the case of dictatorship, but it is generally something bad in democracy as it emboldens not only critical voices but also antidemocratic ideas.”

Kari Huhta, Diplomatic Editor at Helsingin Sanomat, thinks the media sphere needs to take the current situation more seriously: “Newsrooms need to understand the phenomenon better and to challenge it not only by replacing the facts, but also by making the system less credible.”

David Levy has an idea about how this objective can be obtained: by telling alternative stories. “Fake news is about narratives, and not only about news. The best way to counter-balance the phenomenon is to construct compelling contra-narratives. Journalists also need to be storytellers in order to challenge the rise of ‘fake news’, but they should be storytellers with reliable facts,” he says.