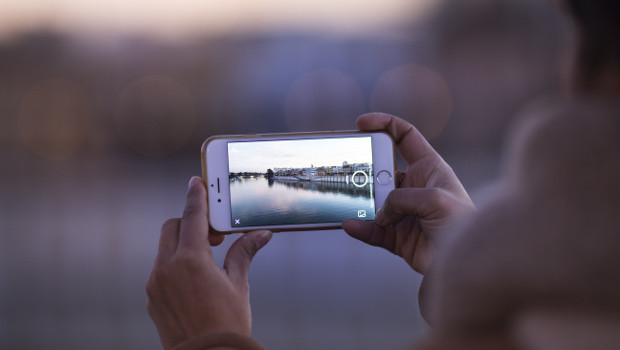 Smartphones today are more powerful, their cameras ever sharper, and the apps for filming, editing and transmitting visual reports are allowing journalists to produce professional results from the field in near real-time.

Today, a fully trained mobile journalist can be extremely productive and serve a variety of roles for daily film, video and audio reporting.

Mid-career journalists can even skill up and earn a certificate in mobile journalism.

In the journalism schools where I teach in Europe; mobile reporting is a compulsory course for every first-year student.

Three years ago I wrote the syllabus and started training journalism students at a university in Vienna, Austria.

All first year journalism students at FH Wien in Austria are required to pass an immersive Mojo training course.

Last week, we once again produced an intensive workshop for the entire class, and the dean is happy to see evidence that mastering the Mojo skill set early in the process is building a strong foundation for the next generation of visual-first journalists.

Actually, a generation of truly versatile journalists: Reporters who can quickly report and edit non-fiction narratives in pictures, sequences and sound bites with video-led stories.

Every one of them now has experience using their smartphone camera as a powerful reporter’s notebook.

What kind of Mojo are you?

There is no ‘one-size-fits-all’ approach for mobile journalism.

Mojo is both a basic reporting skill and also an advanced concept used to re-orient the culture of your newsroom with a common language.

VJs are the James Bonds of the Mojo pecking order

For example, crisis reporters like Claas Weinmann of Bild report from war zones and natural disasters with a range of cameras and techniques.

Claas is a VJ. He can shoot, edit, interview, produce, and file footage, sequences, bites, rushes, and finished mini-documentary packages with any gear he happens to have on him.

He has used everything from smartphones to DSLRs to 360° cams to report from mine collapses, earthquakes and war zones.

That’s the James Bond stuff. Very few people will ever be that good, and that is OK.

The good news is that you don’t need a newsroom full of just these VJs to reap the benefits of improving Mojo literacy with your teams.

Some media organisations and broadcasters that I work with are intensely focused on having their Mojo reporters produce live streaming video reports.

That’s the case with MTV 3 in Helsinki.

MTV has been a client of mine for the last three years and a former political reporter has seen the potential, made her prototypes and today is the first full-time Mojo reporter for her country.

Together we are training the rest of her colleagues in Mojo reporting techniques.

Rajastha: A 360° view of reporters in India learning MOJO at a workshop organized by WAN-IFRA. All types of Android phones are on display here — it is a challenge to teach them all!

Teaching Mojo in India is so different.

First of all, hundred of reporters attend the trainings. Almost nobody has an iPhone. And the energy and enthusiasm is off the charts fantastic. They want this so badly. South Asia is a place where Mojo will really be taking off in a big way.

Other clients are using Mojo reporting to produce video content for social media platforms and even broadcasting on air with high-quality footage that was completely produced with smartphones.

With the debut of new small 360° video cameras

that can attach to smartphones, the range of stories, assignments and innovation strategies for Mojo reporting is rapidly expanding.

The future is brightToday’s opportunities for mobile reporting in real-time are a far cry from 1987 when I was transmitting my first digital pictures from news events as a student photojournalist for the AP and UPI.

In 1987, I digitally transmitted this news photo to the Associated Press who then sent it to members around the world. As a photo reporter covering military exercises over the USA, I was able to get next to the man who was pumping fuel into a fighter jet and to take a photo through the tiny window he used to view an approaching jet.

RewindI would take assignments for the UPI and AP and send news photos from the location using a machine like this. It took eight minutes to digitize and transmit one black and white photo over the phone lines.

I wish that you could see the look on the faces of my first year journalism students when I show pictures like these showing how I used to transmit images.

But that is simply what ‘mobile journalism’ looked like when I was in journalism school.

Here is a video I streamed live to Facebook using three old iPhones and an iPad Pro as a video switcher.

It is truly amazing what one fully-trained Mojo reporter can produce with small mobile devices these days.

And while newsrooms and classrooms have come a long way over the last 30 years, there is still a lot more work to be done to realize the full potential of what Mojo workflows can bring to your news organization.

Once again, here is a video produced with two old iPhones and iPad and one journalist doing all the tasks for camera switching and broadcasting while presenting.

So. What kind of Mojo are you?

Robb Montgomery is an instructor for WAN-IFRA’s Media Management Accelerator, teaching the course titled “Innovation & Integrating StartUp Culture”. He will also lead a mobile and video reporting workshop in Singapore, taking place on May 15 and 16.