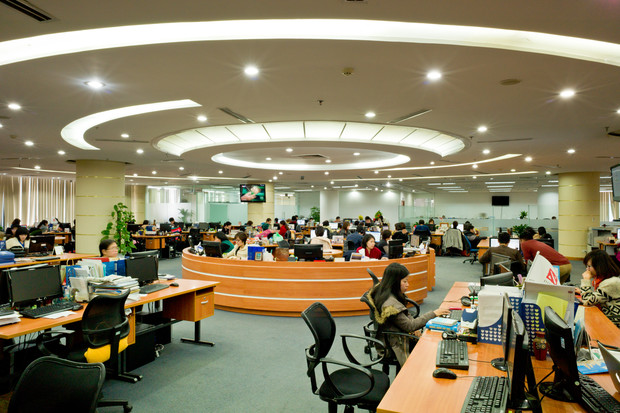 As in matured Asian countries, the large Vietnamese-language newspapers, which long dominated the media landscape, are experiencing a sharp decline in advertising and circulation.

Simultaneously, a myriad of small digital-only news media outlets are literally sprouting all over the web.

VnExpress, which launched in 2001, has pioneered this evolution. Its Chairman and Editor-in-Chief, Thang Đức Thắng, shared with WAN-IFRA’s Asian NewsMedia Focus some of the key milestones of its development.

As with many iconic publications, VnExpress first came to light thanks to an encounter of a visionary project with an audacious investor, with the added advantage of favourable historic circumstances.

Towards the end of the 1980s, as Vietnam moved toward a free-market economy with its Doi moi (Renovation) measures, the Vietnamese government relied heavily on the print media to keep the public informed about its policies. As a result, large, government-linked newspapers, such as Tuoi Tre, Thanh Nien and Lao Dong prospered and the number of newspapers and magazines doubled.

With the reforms, the Vietnamese economy, traditionally centered on textiles, started to diversify. Founded in 1988, The Food Processing Technology Company switched its core business to information technology in 1990 and became the Corporation for Financing and Promoting Technology (FPT). The company rapidly became a major player in IT and telecommunications. Today, it is one of Vietnam’s leading conglomerates, with a presence in 19 countries.

“As an internet service provider (ISP), the FPT Corporation wanted in the 1990s to expand its user base,” says Thang. “From my side, I had dreamt for a long time of creating a new kind of journalism organization, totally different from the propaganda policies. The awakening of the internet inspired me in 1997 to build a publishing platform on which the government would have less control. These two aspirations crossed paths and VnExpress was born.”

A journalist with close to 20 years of experience at the time VnExpress was founded, Thang had made his first steps in the profession at the Vietnam News Agencies. He then completed a PhD degree in journalism in Moscow before joining the Lao Dong Daily as Head of Breaking News in 1995.

Now the president and CEO of FPT Online Service and chairman of VnExpress, Thang nonetheless remains the publication’s editor-in-chief and a journalist at heart.

“A journalist’s first obligation is to tell the truth, and their first loyalty is to citizens, providing the audience with real news,” says Thang. ”Although admittedly such journalism ethics are not always easy to maintain within the strongly regulated Socialist Republic, it immediately allowed VnExpress to differentiate itself from its printed competitors.”

The launch of VnExpress in February 2001 supposed a decisive change in the Vietnamese media landscape, since private newspapers had previously never been permitted.

“From the first days, VnExpress was operated without the press license, only based on the license of FPT as an internet content provider,” recalls Thang. “That was the reason we launched as a purely online platform instead of a newspaper.”

In just a few months, VnExpress became recognized by scores of readers and eventually obtained a license from the Ministry of Information and Communications of Vietnam in November 2011, thus becoming the first financially independent newspaper in the country.

“Not long after our launch, VnExpress became the most read Vietnamese media platform over the world,” says Thang.

“VnExpress now has more than 30 million page impressions on a normal working day, and about 6 million unique visitors per day, which is way out in front of other media organizations.” – Thang Đức Thắng

It publishes 500 stories and articles per day, 95% of which are created by VnExpress’ multi-skilled journalists using the company’s multi-platform authoring tool.

From news to entertainment

Three years after its launch, in April 2004, VnExpress expanded its portfolio with the creation of Ngoisao.net, a digital entertainment supplement focusing on the showbiz lives of famous stars. From then onward, it experienced exponential growth, reaching the top 500 most read websites ranking on Alexa.com in 2005, and the top 100 ranking in 2007.

In 2015, the number of VnExpress’ mobile users surpassed that of PC users and its Facebook fan page reached 2 million likes. In May 2016, the website recorded 51.8 million pageviews in a single day, a record soon broken on 9 November of the same year, with 65.3 million pageviews on the US elections day.

The core of VnExpress’ business, explains Thang, is to “Deliver news on the internet platform and provide business advertising service. (…) VnExpress is a pioneer in terms of applying technology to digital publishing and overcoming challenges to create a solid platform to handle huge amounts of traffic,” he says.

While the traditional print newspapers in Vietnam have experienced a sharp decline in advertising and circulation in the past five years – as in many places in Asian and all over the world – the digital businesses have continued to soar.

“Over the past five years, hundreds of online newspapers have been established,” says Thang.

“The switch from print to online has been incredible. The more online media there is available, the less people will go out and buy a print edition in the morning. Print is becoming more and more inconvenient for readers.” — Thang Đức Thắng

As for VnExpress, thanks to inroads beyond news into classifieds (Raovat.vnexpress.net, relaunched in 2016), eCommerce, niche websites and digital advertising solutions, it has continuously expanded and consolidated its market position.

In 2015, it controlled, 20% of the online advertising market. VnExpress International, a recently launched English Edition of the website, quickly became the most read English-language edition of a Vietnamese publication.

“Thanks to our reputation, our revenue has continued to increase, even during these tough times. In recent years, our revenue has grown significantly. For example, 2016’s revenue is expected to grow by 20% compared with last year,” says Thang.

Should the Vietnamese press environment continue to improve in the coming years, VnExpress and its followers should be able to rely on the country’s powerful development of technology and social media for creating more interesting and meaningful products.

This will, in turn, hopefully not only feed the growth of their prosperous operations but also open up a bright future for news publishing in Vietnam.