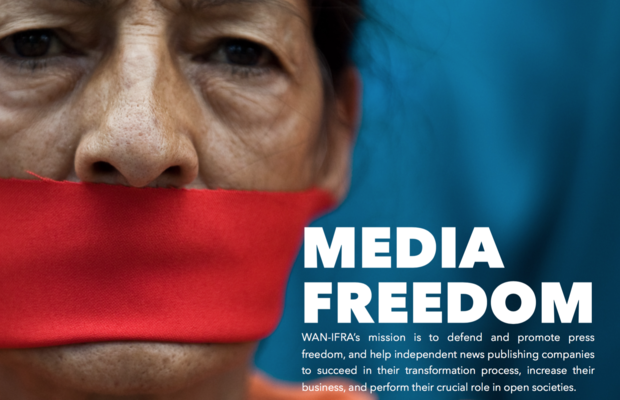 Impunity for those who kill journalists continues to undermine attempts by legal systems worldwide to deliver justice and ensure the rule of law. Read alongside rising numbers of physical attacks and an increasingly hostile online space, we remain far from guaranteeing a safe environment for media professionals, across any domain.

The persistent application of national security laws to punish media or further tighten limitations on freedom of expression has sent a chill through global newsrooms. The redlines are thickening, in many cases multiplying around so many stories; for journalists to navigate them all requires more than a cursory understanding of the law and how it is applied. According to CPJ’s annual prison census, the world’s jails were home to some 259 journalists in 2016, the highest number on record.

Just how many stories never make it into the public record as a result we shall never know. The evidence we do have suggests silence is spreading, the imperative to think twice before publishing more commonplace than ever. With the intertwining complexity of commercial interests and the precarious financial situations of media houses, those redlines are becoming more like red boxes into which so much is dumped, labelled ‘off limits’ to journalism. When the consequences of running a story can be so drastic, potentially deadly, it is far from surprising that so many choose, however unwillingly, to kill a story to be sure of surviving another day.

2016 is consistent in that it fits the pattern of decline seen in recent years, an erosion of basic freedoms reflected in evermore-pessimistic ‘3 May’ op-eds year in, year out. As we mark another World Press Freedom Day and make the habitual – yet highly necessary – condemnations of all of the above, we must also acknowledge the efforts to counteract the slide. It is perhaps the one positive in an otherwise bleak 12 months for media freedom.

Pressures on journalists and media organisations are designed to reduce transparency and accountability in society. Usually it means powerful interests have something to hide from public view. Ultimately, media need to do more to convince public opinion that such targeting is an attack on common values and will not be tolerated.

In the meantime, media are obliged to advocate on their own behalf. The organisations, institutions, NGOs and support agencies designed to help in this are vital, but they are not enough. They are not effective unless media themselves are actively participating in defining the issues, steering the agenda, implementing the goals, and mobilising together to tackle the issues that directly affect them. This is as much of a job within the news- or boardroom as it is out in the public sphere, meaning that many challenges come from within the media itself.

Paradoxical as this may sound, we must own our faults – act to change the disproportionate lack of women in senior positions and address the way many newsrooms treat young people of both sexes; arrest the decline in desirability of taking a job in media; create the conditions and flexibility that attract – and retain – the brightest and best talent; make our editorial standards the most rigorous and our business operations worthy of the deepest trust. There are versions of these – and many more – arguments playing out in newsrooms across the globe; it is simply common sense to suggest a strong profession has more chance of fighting off the epidemic it faces if first its own house is in order.

But we cannot wait; simultaneous efforts to address those internal and external challenges go hand in hand. Providing meaningful skills training that educates the individual and raises the overall standard within the organisation is a start; as a profession, we should aim to say we have done everything that it is within our power to do when it comes to addressing internal challenges. We need to be irreproachable in every respect, and that begins at our desks, in our own workplace, with our own values and practices exposed.

This self-critique will breed self-confidence. Because of the competition to attract and maintain audiences, we demand of ourselves the highest standards in business and editorial: so why not in terms of our rights, our safety, and the conditions necessary to effectively carry out our roles? Simply knowing your rights and knowing the legal limitations that have been placed on your freedom as a journalist is a vital starting point; educating ourselves, so that we may educate others to be stronger professionals, better informed of the options we have, of the support that is out there, is crucial.

But most importantly, it is about being aware of the power of collective action, of mobilising as professionals, for professionals, on whatever issue is put in our path. WAN-IFRA works directly with media organisations in over 20 countries to support these dual efforts. Beyond sensitisation of the importance of a free press, media in Africa, Asia, Latin America and the Middle East are taking concrete steps to ensure they are at the forefront when it comes to advocating their own freedoms – in their newsrooms, among peers, and in the communities in which they operate.

Our Media Freedom Committees are empowering media to lead advocacy on each continent. Coordinated and run by media professionals, they set their agenda and define what they as a collective body can achieve – in partnership with existing initiatives, or as a body unique unto themselves. A year into the experiment, we’re already seeing how the strategy can provide a way forward.

In Uganda, a network of over 250 journalists are connected country-wide to discuss safety, good practice, offer advice, and identify where colleagues need support and training to raise the standard of the profession in the public eye. In Egypt, our Committee is conducting public research into just why society is turning away from media, offering suggestions as to how the profession can reverse this trend. In Indonesia, collaboration between nine leading news organisations brought the Jakarta-centric news industry to the outlying province of Papua to expose issues the local media felt received little or no coverage in the national agenda.

In Ecuador, the media is leading calls for reform with the new government after initiating public consultations on redrawing the notorious media laws. In South Africa, our partner newsrooms have designed and undergone their own advanced digital safety training curriculum, recognising that they all need access to the latest skills to survive in an increasingly controlled online environment.

In Palestine, Botswana, Malaysia, Colombia, Zambia, Cambodia, Kenya and a dozen other countries, WAN-IFRA is ensuring media are in control of similar advocacy efforts that will impact the overall state of freedom of expression, so that maybe next year, or in five years, or beyond, the opinion pieces published on 3 May won’t make for such grim reading.

We are better equipped, more empowered and more likely to succeed – and keep on succeeding – if we know we have the support of colleagues and peers. That is the strength of our profession. That is the approach WAN-IFRA is advocating on this World Press Freedom Day.

This editorial is offered for publication on or around 3 May, World Press Freedom Day. It may be reproduced in part or in its entirety, and by including reference to WAN-IFRA and the author.

WAN-IFRA is the global organisation for the world’s newspapers and news publishers, with formal representative status at the United Nations, UNESCO and the Council of Europe. The organisation groups 18,000 publications, 15,000 online sites, and over 3,000 companies in more than 120 countries.