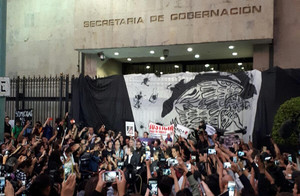 Attendees included journalists from some of the regions with the highest levels of violence targeting the media who expressed their anger at the high level of vulnerability and the defenselessness with which they operate in their respective states.

The attendees stated that the crisis they’re facing is a result not only of the drug-related violence that affects many parts of the country, but also of municipal and state authorities who maintain a hostile relationship with the press. This is despite the existence of a Federal Protection Mechanism for Journalists and Human Rights Defenders, a Special Prosecutor’s Office for Attention to Crimes against Freedom of Expression (FEADLE), several state agencies and protocols.

The officials provided clarifications regarding the measures announced on May 17 by the federal government to address the security crisis affecting media professionals in Mexico.

The delegation expressed its deep distrust over the creation of state-level units to strengthen the Mechanism’s protection schemes at the federal level, is one of the key measures announced.

“Regional media tend to be the most vulnerable in the current crisis of violence affecting the Mexican press,” said Rodrigo Bonilla, Latin America Manager for WAN-IFRA. “The decision to incorporate state authorities in protection work comes with a lot of skepticism because not only have they systematically failed in their role of imparting justice, but on several occasions they have themselves been involved in attacks on journalists and the media.”

The attendees pointed out the importance of working to guarantee justice for the crimes already committed: the current rate of impunity for assaults on journalists is close to 100 percent, which is at the core of the on-going problem as it is seen to protect criminals, inciting them to continue attacking the press.

The delegation reiterated the urgent need to invite the rapporteurs for freedom of expression from the United Nations (UN), David Kaye, and the Inter-American Commission on Human Rights (IACHR), Edison Lanza, in order to meet with all actors involved in this crisis, independently evaluate the operations of existing federal and state protection agencies and prosecutors, and make recommendations.

The meeting was a result of a letter sent to the Mexican government on May 2 by WAN-IFRA. The representatives of the main regional newspapers of the country valued the importance of keeping communication channels open after the meeting and were grateful for the government’s willingness to discuss how they intend to strengthen the tools of the journalists’ protection system.