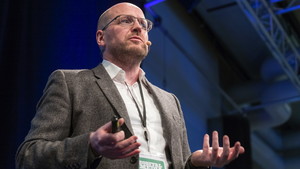 (This post originally appeared on the Content Insights blog and is republished with permission. Image copyright Dan Taylor – dan@dantaylorphotography.com-214)

Pål, one of the key stories at last month’s Digital Media Europe summit was that of subscriptions. Why is it suddenly such a hot topic again?

It’s not really a question of if subscriptions are possible anymore, it’s more a case of how. In our case it was a question of timing: taking the leap at the right time with the sufficient amount of traction. But beyond any shadow of a doubt, digital subscriptions work. It’s not a magic button. You can’t switch a paywall on and just think you’re done. In our case it was far more about the quality of our editorial products, and how we needed to change and adapt those products, than the technological side of things. After all, we aren’t selling the technology, we’re selling good value: solid journalism produced for people living in local communities.

You’ve said that Amedia reaches more than 20% of Norwegians digitally every day – even more when you take print into consideration. Those are the kind of figures many publishers can only dream of. Is there something unique about Norway?

Firstly, a couple of background points which I think are important to highlight if you’re to understand the Norwegian market that we were leveraging.

We went online in Norway with our news editions very early – in the late 90s/early 2000s – and the news industry has been a driver of digital usage here since then, which naturally predates Facebook.

I would argue – and I don’t think it’s difficult to argue – that the Norwegian online newspapers had a very strong position right from the start, and it was as much the case for our local publications as it was for some of the big nationals.
–  Amedia EVP Pål Nedregotten

We’re a country of early adopters in terms of technology and we have the infrastructure to support that as a result.

So Norwegians are just more familiar with the delivery method?

Well, yes, but we’ve always had a very strong newspaper tradition in Norway – far stronger than, say, the UK. The strength of our newspaper ecology, the flora of newspapers scattered all across Norway, is (to my knowledge) rarely replicated elsewhere. Every single small community has its own newspaper and has had for decades and, in many cases, for more than a century.

This might be tied into the fact that TV was heavily regulated in Norway. We only had one state broadcaster, with one single channel, until the early 90s, so the local newspapers had an important and extremely strong position historically, both locally, regionally and nationally.

Another thing that’s helped us is the fact that a lot of the trends haven’t hit us as hard as they have in the English-language press. Google, for instance, has never been a massive driver of traffic to our news stories, and the reason, I believe, is simply a linguistic one. Only 5.1 million people speak Norwegian. Google something in English and you won’t find a hit for us. I think this – while it might have its downsides – has helped us bypass some vanity metrics that might have led us down the wrong strategic path.

At Amedia you started off using an ad-directed model. When did that change?

I think for most of the 2000s, and way into 2011 and 2012, people believed in the ad-funded model. I’ve been a part of this, so I’m not going to avoid taking the blame, but for a time it was skyrocketing with a 20% or 30% growth in digital advertising income year on year. Essentially, we thought that, as the print subscription pretty much paid for print and distribution, migrating to digital – where obviously there aren’t the print and distribution costs – advertising would continue to fund us, as it had in print.

Essentially Facebook and Google happened. Their growing position in the advertising market hit the part of our economy that turned out to be really vulnerable: advertising. Especially in print, it was taking a lot of money out of the economy that we had previously been the only outlet for. Although at that time we were continuing to grow digitally, the numbers just didn’t add up and we realized that we had to do something.

We tried classifieds, we tried partnering with shopping, we tried branching out, we tried innovation out of the company, we followed Clayton Christensen’s methods – we did anything and everything that was suggested in the text books.
–  Amedia EVP Pål Nedregotten

Now, this might have been an execution problem in the end, but none of it really made a substantial impact, so we had to do something else.

What we did was go back to our roots and tried something that pretty much everyone said wouldn’t work, except for people like the Financial Times. We kept hearing the same thing – that [subscriptions] had only worked for those guys because they were special, that their situation was different. This, by the way, is the exact same story we hear from other people looking at us now – that they can’t replicate what we did because we’re different. So, the conclusion I draw is that in each our own way, we’re probably all special!

Ha! Why do you think subscriptions work for you?

Well, I think it’s a lot of hard work, a lot of data, a lot of really solid analysis, an approach to working with those analytics that enable us to navigate a really complex territory without taking a huge cost per experimentation, and getting the entire organization to play along with us – mobilizing technologically, culturally and organizationally. So yeah, it’s complex. All the levers that we’ve been pulling to get this to work have to do with getting people to do the right thing: more of the right thing and less of the wrong thing.

You talk about data. What kind of data are you using to inform those decisions?

I won’t say that we’ve always been a data-driven company, but we were fortunate in having invested in a really strong, solid and forward-looking data structure for logging usage when we started out on this journey. We also had quite a bit knowledge on how to utilize that data, so we were able to do fairly sophisticated analysis of content and usage from early on. We knew how people were using us, where they were coming from, which pages they were approaching, how the traffic was coming from Facebook – we had a lot of very strong data on all that, so when we started out with the login solution, we just extended that, and when we started the paywall, we extended it even further. But of course, it’s a lot more sophisticated now.

We started getting live data from the first second that the first subscriber read their first story. We’re at the stage now where we have a lot of data, but the quantity of the data is not the most important thing. It’s about having the right kind of data; generating the right kind of insight. The sheer amount of raw data has been one of the reasons that we haven’t made standard tools like Google Analytics widely available, because it’s very hard to interpret data out of the box properly. The data that is the most useful is often that which sits between these big data sets and business units, and it’s this data that, when it’s interpreted properly, is the most illuminating.

Who has access to that data? You mention that you have a team of data scientists, but does this feed down to the journalists and editorial staff also?

Yeah, it does. Obviously the raw data is pretty much useless for those guys, and I must say, just to be clear, that there are privacy issues and a lot of checks and balances built into this kind of user data, so no single journalist gets information about the individual people reading the stories: it’s all aggregates and anonymized segments.

But, in terms of who’s getting the data in the form of reports, we’re working towards democratizing insight. Our journalists get reports every night about how we did the previous day, and they also get live data throughout the day.
– Amedia EVP Pål Nedregotten

How this might work in practice is well explained by the Norwegian football cup, which is in progress at the moment and is huge for our newspapers. While these matches are happening we are able to see how many people are starting the live streams, how many are sticking with those live streams, how many are entering through the front pages for titles our journalists have written, and they’re able to make adjustments as needed.

The data is fascinating and very insightful: we’re able to see if focusing on the football, for example, is negatively impacting everything else we’re writing. The answer to that, by the way is no: we actually had a 10% lift in traffic on all the other stories which weren’t related to football.

So you’re able to see how your users are using the site, but what about the other question: why are they subscribing in the first place?

That’s a very precise question with fortunately a very simple answer that of course has really complex consequences! There are two things that relate to subscription sales. The first is how you sell, and the second is how you keep them. The answer to both questions is, quite simply, good journalism.

Is there a distinction between so-called premium content and…

We don’t distinguish between premium content and other content, and the simple reason is that the open-access stuff has to be good.
– Amedia EVP Pål Nedregotten

Those reading open-access stories are our future readers, so if we give away crap, they’re not going to see a reason to subscribe. It’s as simple as that.

So here’s my final question for you then: you said earlier that you’re now being tarred with the brush of being ‘special’. Why aren’t you? What could others be doing to make subscriptions work for them?

I think it’s bloody hard to give advice! In many respects we were able to leverage some advantages that were unique to us, much in the same way that the FT were able to leverage some of the factors that were unique to them. Likewise, I’m certain that there are things which are unique to other players which they’ll be able to capitalize on. The point of commonality is that you need to engage your target audience if you’re going to have any hope in succeeding, and I also believe that if you treat it as a technical project, you’re going to fail.