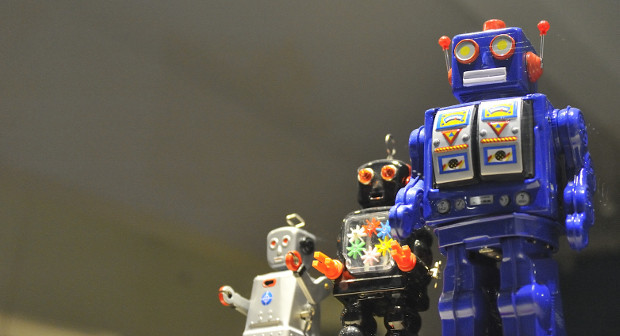 It’s been more than a year since Quartz launched its nascent chat app that sparked interest, praise and criticism within the industry. And ever since companies like Facebook, Telegram or Kik made the technology to build chatbots available to the general public, news organisations have been experimenting with it in various forms.

Most news organisations see this trend as just that: a chance to experiment with an emerging technology on established platforms. And clearly, these experiments are primarily centred around testing the waters of a more personalised experience with their users. But like with any new technology, chatbots come with the expected yin and yang.

“I think one of the big advantages is the ability to personalise your news stream to your taste and to your needs,” said Andrew Haeg, CEO of GroundSource, a company that allows organisations to build chatbots.

“Forever, we’ve created stories that people receive and they’re largely undifferentiated and everyone receives the same story. But if you have a different level of expertise or curiosity about the story, you don’t really have a way of customising the story to your own needs.”

GroundSource recently teamed up with the Texas Tribune to help them develop its Facebook Messenger bot, Paige, aimed at delivering information about the Texas legislature.

With Paige, which sends out updates on Mondays and Fridays and allows users to ask questions or submit tips, the Tribune is trying to reach an audience that is curious about politics but not too heavily invested in the subject matter.

“They had a really good, vivid picture of who they were serving with Paige,” Haeg said.

“When you’re setting out to create a bot, you really need to know who it’s for and what informational needs those people have. Doing actual research about who the bot is for will inform everything from the voice of it to the information it’s going to convey, to the questions you can ask it, as well as the marketing and the discovery of the bot.”

With 1,000 people subscribing to the bot within two weeks, Haeg noted that “early indications are really strong that people want to engage in this way”.

Rappler, a digital pure player in the Philippines, launched its Facebook Messenger bot in a bid to stay connected with its user base that was moving from Twitter to Facebook, and to improve discovery of its content.

The chatbot, dubbed RapRap, functions as a search and conversational tool, surfacing content related to keywords, and allowing users to ask basic questions.

“They wanted to increase discovery of their content,” Kevin Anderson, who covered Rappler as part of his report “Beyond the Article”, explained in a WAN-IFRA webinar.

“They found that simply sharing their content on Facebook was really leading to kind of a superficial level of discovery, and there are certain things that work well on social platforms, like very emotive content, and identity-based content. But they really wanted people to be able to see and for the chatbot to surface the widest range of content to their readers.”

The chatbot has also allowed Rappler to better communicate its editorial priorities with its audience, since the Facebook newsfeed offers few possibilities to highlight or differentiate between the various types of content Rappler’s staff produces.

“People see an article but there’s no sense of the importance of the article, it doesn’t give you the same kind of editorial priority you have with the design of your own website or push notifications,” Anderson said.

Additionally, Rappler built a chatbot to help with crowdsourcing information for their projects around corruption reporting or good governance, allowing users to submit reports.

A shift from open social networks to closed messaging apps

While the launch of RapRap was driven by a change in social media tastes, users moving from open social networks to closed messaging apps has also played a part in the rise of chatbots. In fact, a Business Insider Intelligence report found that the combined user base of the four biggest chat apps (WhatsApp, WeChat, Vibr and Facebook Messenger) has already surpassed that of the four biggest social networks (Facebook, Twitter, Instagram and Snapchat).

Messaging service Telegram rolled out its bot API and platform in 2015, and was used for the launch of Politibot, a chatbot created for the Spanish election last year.

“We chose Telegram because it was heavily used by politicians in Spain, especially from the new parties,” explained co-founder Eduardo Suarez.

“We thought it was a good way to connect with political junkies.”

Launched a day before the election campaign started, the bot served up daily news digests, which included graphics, long and short-form articles, and provided users with real-time election updates within their constituency and on a national level.

Within three weeks of the bot going live, Suarez said 8,000 users had signed up, and 103,510 sessions were recorded out of which one-third lasted longer than five minutes, and two-thirds longer than one minute. On top of that, weekly user retention stood at 56 percent.

Naturally, the bot’s capabilities were limited and it couldn’t understand all questions and messages it received, but Suarez said that actually helped spread the word about it.

“People were connecting with the bot. Some of its answers to questions it didn’t understand went viral,” Suarez said.

“From the beginning, we said this is a very clumsy robot, this is an experiment, and we tried to lower people’s expectation in that regard, and I think that is a good idea.”

The bot is now also available on Facebook Messenger, covering international politics in addition to the Spanish political landscape.

The above examples show in what ways chatbots can be used to benefit a media organisation, from reaching new audiences to providing more personalised experiences. But the technology is in many ways still limited.

“One of the most interesting things is that people really do chat to them as if they were living sentient beings and the technology is nowhere near ready for that. So the experience can be quite unsatisfying if you’re a user,” said Martin Belam, social and new formats editor at The Guardian.

Jacqui Maher, head of interactive journalism at Condé Nast International, made the same observations with the Vogue UK Messenger bot that was launched around Fashion Week to offer users news about designers and their collections. The team didn’t anticipate that people would speak to the bot as if it were an actual human being, using phrases such as “thank you” or “good morning”, which the bot didn’t understand.

“My biggest takeaway from that experience is that you should build it in a way that you have some kind of view how people are interacting with it, and that it’s flexible enough that you can respond in real-time or near real-time to different behaviours and how people are using it,” Maher said.

When choosing a tool to build a bot, she advised to go for something that is flexible, and that lets one pivot and respond, as well as setting up notifications to be alerted to the terms the bot doesn’t understand.

But the bot failing to respond to certain requests and questions isn’t the only issue that can arise from people interacting with it like a human being.

“You need to think a bit about the ethical side of what you’re doing,” The Guardian’s Belam said.

“When people are using messaging services with their friends, they expect that they’re having a one-on-one conversation, and I think they have the same expectation when they’re having a conversation with a messenger bot. They don’t realise that there’s a whole team of humans who could read the messages that are coming in.”

So far, The Guardian has launched a recipe bot, and a morning briefing bot, and is currently testing a third, which aims to answer people’s questions about Brexit. While the aptly named Sous-Chef recommends recipes based on keywords, the morning briefing bot acts more like a push notification, sending subscribers the top stories or a selection of news via Facebook Messenger every morning.

“We feel this gives us a regular presence on someone’s phone. We’ve built up a reasonably small subscriber base for it, we know they open the messages a lot but the click-through rate isn’t high. We suspect that people get the message, scroll through the links and feel caught up for the day. They go about their daily business, and then maybe catch up with the news a bit later,” Belam said.

For Belam, it’s unlikely that chatbots will become a highly popular medium for getting news, but experimenting with them helps create a better understanding of automated conversational experiences, and how users would interact with these interfaces.

“It’s an interesting space, not because I think everybody will be using chatbots for news, but because I think news organisations need to understand how that kind of conversational interface is going to develop over the next few years.”

Against this backdrop, how much time and resources should news organisations actually invest in chatbots, especially considering that there aren’t really any monetisation possibilities at the moment?

“It’s long been suggested that we should invest in new platforms that don’t have monetisation yet but there will be some in the future, so I think you have to be cautious about how much you invest in these things,” Belam said.

“I also think you do have to dip your toe in the water and discover it. But there’s a reason we don’t have a massive marketing campaign trying to get people onto our chatbot because it’s not a monetisable platform for us at the moment. So why would we drive people off our existing apps where we can at least monetise them in some way.”