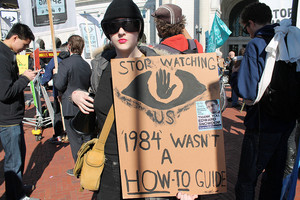 Daily, our rights to speak up and speak out are being eroded, restricted and compromised through the corrosive impacts of tools of the state: surveillance, data retention policies, and the overreach of national security and anti-terrorism legislation.

Already, we’ve witnessed the Trump administration escalating the use of force at the US border, seizing and searching the digital devices and social media accounts of journalists (and ordinary citizens) who seek entry to the country, with risk to investigative journalism dependent upon confidential sources, and whistleblowing. In Australia only last week, the Federal Police (AFP) admitted illegally accessing an unidentified journalist’s metadata.

But for a fair and just world, citizens must be able to reveal major injustices and corruption without fear of exposure and reprisals.

That’s now under threat, as states and corporations use their power to intercept our communications, harvest our emails, and trawl through our mobile metadata. It is these powers which undermine the principles and practice of source confidentiality – a tenet enshrined internationally in both journalistic codes of ethics and human rights law that has supported the sharing of hidden information with journalists in the public interest, from Watergate to the Panama Papers.

Today, on the eve of World Press Freedom Day, UNESCO (the UN’s Educational, Scientific and Cultural Organisation) publishes a new global study Protecting Journalism Sources in the Digital Age of which I’m the author.  I completed this study under contract to the World Editors Forum and WAN-IFRA, assisted by an international team of research assistants.

The study examines source protection-related developments in 121 countries during the period 2007-2015. It concludes that unless journalistic communications are protected; surveillance is made subject to checks and balances; data retention laws are limited; and accountability and transparency measures, applied to both states and corporations, are improved, confidence in the confidentiality of sources could be further weakened. The likely result is that much public interest information, such as that of corruption and abuse, will remain hidden from public view.

What I learned during the research process about the implications of 21st-century communications for whistleblowing and investigative journalism chilled me. When you catalogue a decade’s worth of cases globally, as I did with my research team, you’re confronted with an undeniable reality: even with the availability of tools like encryption, it’s becoming much harder for journalists to protect confidential sources and whistleblowers.

Take, for example, the US Justice Department’s mass seizure of AP journalists’ phone data in 2012, during a leak investigation connected to the CIA. Or, as revealed by Edward Snowden, British surveillance service GCHQ’s scooping up of emails from some of the world’s most reputable news organisations. Then, there’s the case of the 100 Macedonian journalists placed under surveillance by their government who, in 2015, were invited to the opposition party’s headquarters to collect folders filled with transcripts of their conversations spanning a two-year period.

In Latin America, La Semana magazine revealed that the Colombia Administrative Department (DAS) conducted illegal surveillance on the phones and emails of journalists from 2007-2009. The Department was dismantled in response, and its former head was convicted of illegally spying on human rights activists, journalists, politicians and judges.

There’s also the revelation that NSA surveillance of German journalists and their sources led to a foreign agency identifying one of these sources to the German Government in 2011.

Australia, my home country, is cited in the study in connection with the overreach of national security and anti-terrorism powers. The study notes the classification of information on asylum seeker arrivals and detention requires that most journalism undertaken on these issues be dependent upon confidential sources, and that the revelation of any such classified information has been criminalised.

It also identifies Australia’s data retention legislation and warns of the risks it poses to confidential journalistic communications and whistleblowing, prescient in light of last week’s news. Concerningly, the AFP’s response to the metadata breach – no punishment for the “human error” and failure to identify the journalist involved – did not measure up against the study’s model source protection guide.

The study sets benchmarks: transparency, accountability, proportionality and necessity – but against these standards, many countries fall short at the first hurdle of source protection frameworks fit for the Digital Age. What’s the point of laws designed to shield journalists from revealing their sources in court if states seek to identify them covertly, and illegally?

Such breaches, and a culture of unchecked surveillance, are having a severe chilling effect on sources and whistleblowers and they’re causing journalists around the world to alter their investigative reporting practices.

As the International Consortium of Investigative Journalists’ (ICIJ) Director Gerard Ryle told me when interviewed for the UNESCO study: “You have to assume that everything you do is being recorded or traced.”

It’s World Press Freedom Day on May 3rd. It’s time we all stood up for the right to share information in the public interest – without expectation of interception, or fear of reprisals.

Julie Posetti is a journalist and University of Wollongong researcher who leads Digital Editorial Capability at Fairfax Media. She produced UNESCO’s Protecting Journalism Sources in the Digital Age (available for free download online) while a WAN-IFRA research fellow.

This article also appeared in the Sydney Morning Herald.