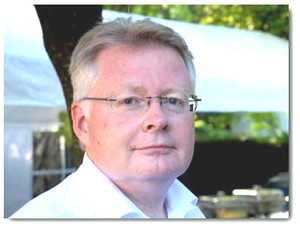 Reiner Mittelbach was CEO of IFRA from 2001 to 2008 and of the merged organisation from 2008-2009. He transformed IFRA from a print-centric organisation to one focused on multimedia and media convergence and greatly expanded IFRA’s research activities into the future of the news business.

Speaking in 2009, Gavin O’Reilly, then President of WAN-IFRA, said, “Reiner has provided exceptional service to the newspaper industry. His contributions to the merger between IFRA and WAN helped set the direction of the new organisation, to the benefit of the entire industry.”

Reiner Mittelbach began his career in 1986 with Unilever in their packaging group 4P. After several positions in sales and marketing, he joined another packaging company called Menshen GmbH & Co KG in 1994 as their marketing and sales director.

Two years later, he became involved with the graphic arts industry for the first time by joining Polar-Mohr, the manufacturer of cutting systems, as their sales director for a brief period before becoming their marketing and sales director.

Two and a half years later, he moved to Heidelberger Druckmaschinen AG, where he held the position of Speedmaster sales director for Europe and North America for one year before he joined the management team of Heidelberg’s business unit Finishing as senior vice president marketing.

After he left WAN-IFRA in 2009, he became the CEO of GIS from 2011-2015, then joined the KnowledgeView group in 2016, holding leading board positions in KnowledgeView, NewsSocial and Rewardisement.

With his death the publishing industry has lost a great talent and an innovative leader, and his family and friends have lost a great human being full of energy, fun and optimism.

Reiner Mittelbach was an industry leader of the first calibre, a strategist who pioneered key initiatives in research on new digital trends and technologies, and a colleague who earned respect.

In addition to his work, he valued his fulfilled private life with his family. Especially in the last few years he enjoyed hiking, skiing and taking photographs in the mountains of Liechtenstein, Switzerland and Austria. He also discovered golf, and spent many happy hours on the golf course with his wife, daughters and friends.

“I was lucky to be close to Reiner during my time at IFRA and was privileged to work under his leadership. He was the one who created the conditions for, and helped guide, the successful merger of WAN and IFRA – a very significant undertaking. His leadership proved invaluable. Our deepest sympathies go out to his family.”
– Vincent Peyrègne, WAN-IFRA Chief Executive Officer

“Reiner was not only a colleague, but a good friend and mentor too. We used to discuss extensively about our dreams and vision for IFRA and later WAN-IFRA. He was the reason for me coming back to the organisation.”
– Thomas Jacob, WAN-IFRA Chief Operating Officer

“I knew Reiner for many years and greatly valued him as a friend. His leadership of IFRA was truly exceptional. I will miss him.”
– Tomas Brunegård, WAN-IFRA President

“It is with deep sadness that today I received the news of Reiner Mittelbach’s premature passing. I had the great pleasure of working with Reiner from 2001 to 2009, he as CEO, I as Treasurer of IFRA. He was a reliable, hard-working leader who always put the company and employees ahead of his own interests. My thoughts today go to his wife, Evelyn, and their three girls whom he was so proud and fond of.”
– Tore Stangebye, WAN-IFRA Treasurer

“I am deeply saddened by the sudden loss of Reiner Mittelbach, a colleague who was so very supportive of newspapers in the Asia Pacific. As CEO of WAN-IFRA he always had the industry’s interest at heart. Most important, I am honoured to consider Reiner my friend and will miss him dearly.”
– Pichai Chuensuksawadi,  former WAN-IFRA Asia Pacific Committee Chairman

“IFRA’s investment in our Indian company was initiated when Reiner was the CEO, and he was liked by all Indian publishers and CEOs. We miss him a lot.”
– Magdoom Mohamed, Managing Director WAN-IFRA South Asia