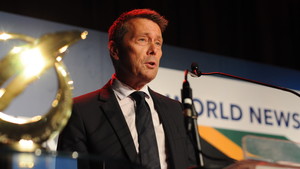 Brunegård was elected WAN-IFRA President in June 2013, succeeding Jacob Mathew, Executive Editor and Publisher of the Malayala Manorama Group of Publications in Kerala, India. He was re-elected in 2015. Prior to becoming President, he served as Chair of WAN-IFRA’s Press Freedom and Media Development Board, which oversees the organisation’s extensive global projects in these domains.

Brunegård has served as Chairman and as Group CEO of Stampen Group in Sweden. He joined the company as CEO of the flagship Göteborgs-Posten newspaper in 1996.

At the 2017 Congress, Brunegård handed the WAN-IFRA Presidency over to Michael Golden, vice chairman of the board of The New York Times Company.

Mr. President, Excellencies, Ladies and Gentlemen, Colleagues and Friends – It is an honor and a great privilege for me to welcome you all to Durban and the 69th WAN-IFRA World News Media Congress. To see all of you here today, coming together from all corners of the Earth, makes me extremely proud because that is the very core of what this organization is all about. To take part, listen and learn, to debate and exchange ideas is our way of moving ourselves, our societies, and the news media industry forward in what continue to be challenging times.

I am also especially pleased that WAN-IFRA is once again arranging this Congress in Africa. Ten years ago we were in this country, in Cape Town, and enjoyed some very important, meaningful days there. I believe now, as I did then, that the future belongs to Africa, and it is my hope that African media continues to play its leading role in the development of this booming continent.

Before I continue, I would like to express my gratitude to our hosts, the City of Durban and the Province of KwaZulu-Natal. Thank you, sincerely, for hosting us, for supporting our Congress; it is because of you that we are more than 700 gathered here in Durban today.

When we held the Congress here in South Africa in 2007, Nelson Mandela joined us. He was somewhat close to our organization, having spoken soon after his release from prison at one of our board meetings. My predecessor as WAN-IFRA President, Jacob Mathew, has mentioned this to me several times as a highlight of his long, illustrious “career” within WAN-IFRA.

Indeed, Nelson Mandela once said: “A critical, independent and investigative press is the lifeblood of any democracy”

I think that most of us in this room believe this; in fact, I’d go so far as to say we all work on a daily basis to demonstrate it, and, if necessary, would be ready to fight for it. In too many tragic cases, media professionals even give their lives for this cause.

Freedom of expression and freedom of speech are based on the belief that we all are born equal. Such freedoms are therefore basic, universal human rights. A free and independent press is one of the cornerstones of a free, prosperous and democratic society. Yet, this fact is more undermined today than we have seen in decades.

Even the leader of the so-called ‘free world’, the President of the United States, has challenged this by labeling a free press “the enemy of the American people.”

This suggests we have a rocky road ahead of us. However, as the wisest among you will know, we, the press, have been here many times before. Combative politicians come and go; threats and censorship ebb and flow. The one main constant is rather a simple maxim; ‘the truth will out’. And I am pleased to say that it is still so often the press that uncovers such truths, for the whole world to see.

I congratulate the journalists, editors and publishers here in South Africa for their pursuit of excellence amidst adversity, in particular standing firm against the encroachment of government and non-state actors into the media space, rejecting proposals for a Media Appeals Tribunal, and continuing the principled fight against apartheid-era laws, which should have been repealed at the dawn of democracy. What heartens me is the support of the judiciary in protecting press freedom from assaults by government and the political class.

As an example of this, media and civil society continue to withstand the controversial Protection of State Information Bill and have clearly identified where it falls short of offering protections for freedom of speech. Yet it remains of deep concern to us, Mr. President, that Parliament has ignored such concerns and presented it to you as is; we therefore urge you to remove the threat of the Bill given the great worry it continues to cause.

My years as President of WAN-IFRA have afforded me the opportunity to observe the press freedom situation worldwide.

We at WAN-IFRA remain deeply concerned by increased government interference in the activities of a free press. It is a trend we have been battling against for a number of years, and we see its ramifications worldwide: in Tanzania, the US, Ecuador, Zambia, Egypt, Malaysia, the Philippines, and beyond. Perhaps nowhere exemplifies this more at the present moment than Turkey, where over 150 of our colleagues are currently in jail, where media businesses have been shut down and critical opinion has been silenced, often in the name of national security. We condemn with the strongest voice the erosion of media freedoms in Turkey and call for all journalists imprisoned there – and elsewhere in the world – to be freed unconditionally.

It is worth special mention of our two recent Golden Pen of Freedom laureates from this continent: Eskinder Nega and Dawit Isaak; both outstanding members of the profession, both imprisoned for their work. We remain particularly concerned at the lack of information regarding Dawit, whose disappearance into the hell that is the Eritrean prison system 16 years ago reminds us all of the immense sacrifices made by those who stand tallest for their freedom. We renew our calls on the governments of Ethiopia and Eritrea respectively to free Eskinder, free Dawit – and to free them immediately.

WAN-IFRA remains dismayed by the violence and impunity that our colleagues in Mexico face. Four journalists have been killed so far this year, and while we salute the courage of the media professionals fighting daily to expose corruption and organized crime, we must demand the Mexican authorities do more to stop the killing and make the country safe for journalists. The death of a journalist is a crime that has repercussions for all of society, and therefore we must ensure everyone concerned is doing everything they possibly can to prioritize the safety and protection of our media professionals.

Similarly, in the online space we have seen hate speech and attacks against journalists, particularly women journalists, rise sharply with the supposed anonymity of the trolls and the abusers providing free reign to threaten freedom of expression. And of course, we’re only just beginning to understand the growing threat of the global surveillance state, with the protection of sources now a top priority for newsrooms worldwide.

Our struggle remains constant; our watchful eye required at all times lest we become complacent with our freedom. From so many different directions we are forced to justify our existence as professional media, serving – as Archbishop Desmond Tutu once told us – a ‘noble calling’. Time and again we demonstrate the need for quality journalism and successful media businesses, acting as the eyes and ears of society to protect the interests of the many against the abuses of the powerful.

And this is one of the reasons we come together, offering solidarity to one another when times are hard, when it matters most. During my time as President, I have seen that it can make all the difference.

There are many other areas we will cover over the next few days. The presence of fake news and the importance of fact-checking, which I do believe presents a great opportunity for many of us, as well as the use of new technology such as artificial intelligence, virtual reality, and much more.

We have learned that technology can become both a friend and a foe. But testing, trying and innovating is today a must. Risk taking needs to be part of the culture in every media house. This was not necessarily the case in the past.

Mahatma Gandhi was an outstanding editor in both South Africa and India. Ninety-eight years ago, another editor, who was starting a newspaper titled The Independence, requested a message from Gandhi, who was practicing law here in Durban. Ghandi told the editor that his paper must live up to the values indicated by its title. He also said, “May I further hope that, to a robust of independence, you will add an equal measure of self-restraint and strict adherence to truth?” Gandhi’s words have become even more relevant and urgent now.

Before I end I would like to highlight the Women in News Summit we organized in conjunction with this year’s World News Media Congress. Many of you were there this morning. This is the first time such an event has taken place, and while it might seem a small step, it is a big leap for us. Gender disparity in the news industry needs to be exposed and addressed, and it is well past the time to remove barriers. We as an industry, and as individual publishers, need to take accountability to drive this change. I look forward to these and other discussions informing the way forward, while also celebrating stories of leadership and inclusion as we did earlier.

Since this is my last Congress as President, and on Thursday I will hand over to my successor, Michael Golden from the New York Times, I would like to say thank you to all of you for showing confidence in me to serve you. I hope you will enjoy some fantastic days here in Durban and a very successful Congress. Listen, learn and take part in the discussions, but most importantly of all; make some new friends.