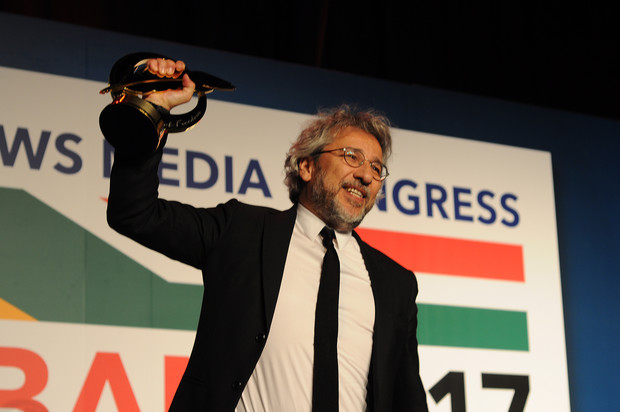 The award, made in Durban, South Africa during the opening ceremony of the 69th World News Media Congress and 24th World Editors Forum, recognised Mr Dündar’s outstanding work in upholding the values of a free press along with his unwavering support for Turkish colleagues, some 150 of whom are currently in jail.

“Journalists need courage because there is a cloud of fear hanging over them – fear is everywhere, and it is so powerful,” said Mr Dündar in his acceptance speech, delivered in front of over 700 publishers, CEOs and editors in chief from the global news industry. “I come from the biggest prison for journalists in the world: currently 150 of my colleagues are behind bars in Turkey, and imprisoning one member of the press intimidates hundreds of others.”

Following a July 2016 failed coup attempt, the government of Turkish President Recep Tayyip Erdoğan has clamped down on an already stifling environment for independent media by using the penal code, criminal defamation legislation, and the country’s anti-terrorism laws to punish critical reporting. Journalists are facing growing violence, harassment, and intimidation from both state and non-state actors.

Along with unprecedented numbers of arrests and imprisonment, often for supposed breaches of national security laws or for collusion in anti-state activities (for which there is rarely any evidence presented), the Turkish authorities have also reportedly shut down some 150 media organisations since the coup attempt.

“We are gathered here to celebrate journalism, honour a fearless, principled editor-in-chief, and denounce the appalling situation that has been unfolding for press freedom in Turkey,” affirmed Dave Callaway, World Editors Forum president, editor and CEO of The Street.

“Journalism is not a crime. Turkey must immediately and unconditionally free all journalists in jail because of their work,” Mr Callaway said. “Restoring media independence and guaranteeing press freedom should be an absolute priority for anyone with an interest in seeing Turkey succeed.”

Can Dündar, a journalist for nearly 40 years, has worked across magazines, daily newspapers, and television. He was dismissed from his post at daily Milliyet in 2013 in a decision widely believed to have been a result of his critical commentary of the government’s handling of the Gezi Park unrest.

He was transferred to Cumhuriyet, Turkey’s oldest newspaper, where he was named editor-in-chief in February 2015.

In November of the same year, Mr Dündar was arrested together with his colleague, Ankara bureau chief Erdem Gül, following the publication of an article alleging Turkey’s intelligence services had attempted to send arms to Syrian rebel groups. President Erdoğan had previously claimed the trucks were delivering humanitarian aid.

After spending 92 days in jail, the pair were released on 26 February 2016 after the Turkish Supreme Court decided that their detention was an “undue deprivation of liberty”.

Since June of that year, Can Dündar has lived in exile in Germany; having survived an assassination attempt outside an Istanbul court – for which the gunman spent just 5 months in jail – he decided it was too dangerous to continue living in his homeland. There are currently six arrest warrants against him in Turkey.

“As a leading member of the global freedom of expression movement, the voice of WAN-IFRA has been a constant, denouncing the attacks, the jailings, the closures and the lack of guarantees for journalists to carry out their profession unhindered,” said Mr Callaway. “We cannot let up; our Turkish colleagues need our support now, more than ever.”

For the speeches from the Golden Pen ceremony visit www.wan-ifra.org/pressfreedom

WAN-IFRA is a member of a global coalition of freedom of expression and human rights organisations who regularly speak out on behalf of Turkish media. For more information on the individual cases of jailed journalists, please visit the International Press Institute’s freeturkeyjournalists.com campaign site, Amnesty International’s #FreeTurkeyMedia page, and get involved in supporting colleagues under threat in Turkey by keeping their cases in the media spotlight.