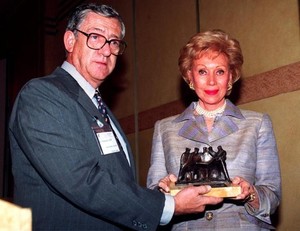 Ernestina Herrera de Noble (R) head of Argentinian daily Clarin is presented with her award for publishing achievement by the Federation of Newspaper publishers (FIEJ) President Kenneth Prescott-Low at a Paris Hotel May 31. Reuters/Files

The President of the World Association of Newspapers and News Publishers (WAN-IFRA), Michael Golden, expressed his condolences to the family, friends and colleagues of Ernestina Herrera de Noble, who died today at the age of 92 in Buenos Aires, Argentina.

The Argentine executive directed Clarín daily newspaper since 1969, following the death of her husband and founder of the newspaper, Roberto Noble, that same year.

Under her management, the daily became one of the most widely circulated newspapers in the Spanish-speaking world and one of Latin America’s most important and influential news media groups.

A woman of outstanding vision and leadership, she received the first-ever “Editorial Achievement Award” from the Fédération Internationale des Éditeurs des Journaux (FIEJ), WAN-IFRA’s predecessor organisation, in Paris in 1995.