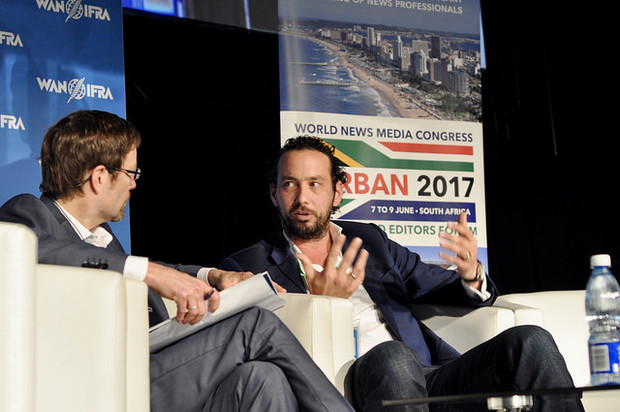 “We started five years ago. In the meantime, we have achieved quite a wide footprint,” said Robin Lingg, CEO of Ringier’s operations in Africa and Asia (pictured above at right, with WAN-IFRA’s Dean Roper).

“We are active in 11 countries in Sub-Saharan Africa with more than 650 employees, 99 percent of whom are local,” he added. “Young, tech savvy employees with an average age of below 29. Five years ago, people from Switzerland would visit us in Africa with the idea of to teach them. Nowadays, they come knowing that they will learn about digital businesses in the 21st century.”

There are 600 million people in Ringier’s Sub-Saharan Africa market, half of Africa’s overall 1.2 billion population, Lingg said. “Hundreds of millions of these people are young, advancing internet users.”

Globally, Ringier is active in 16 countries and has some 7,250 employees. It has a portfolio of more than 120 newspapers, magazines and 90 web and mobile platforms. They are active on more than 210 platforms. Overall, the company reaches more than 100 million people through its products.

In Africa, all their businesses are digitally based.

“It was clear for us this could be an interesting opportunity here, so we sent one or two people with a little bit of money, and they started finding talents,” Lingg said. “They started learning about the continent.”

“For us it was also clear you couldn’t just come here with big pockets and deploy your business models from the other markets. You have to come here and understand the local needs.” – Robin Lingg, CEO, Ringier Africa & Asia

Furthermore, he said the first year and a half was spent learning on the ground, without support from headquarters in Switzerland.

“We were learning what worked, and after 18 months, we said the learning’s done, and we know now what might work and with whom we can build the businesses here,” Lingg said. “And this is when we started to invest more heavily and also to bring the technologies and the necessary expertise, but already adapted to what we thought would be needed here on the ground. We don’t come with fixed ideas. You have to do things.”

The three main pillars of Ringier’s businesses in Africa are built around digital publications, classifieds and providing digital marketing services. Even though Ringier has an 180-year-plus history as a legacy business, for the African market, it is indeed a digital pure player.

For the HuffPost, the revolutions of the Arab Spring, specifically the Jasmine Revolution in Tunisia, created a media vacuum that led to the birth of the HuffPost Maghreb, a French-language digital edition covering Tunisia, Morocco and Algeria.

“In 28 days between December 2010 and January 2011, the Tunisian people got rid of a dictator and gave birth to a democratic regime, which is still today the only one in the region,” Alix Etournaud, Founder & Deputy Chairman, HuffPost Maghreb, told delegates in Durban.

“Shortly after the beginning of the uprising I went to Tunisia, and I realised how discredited and undermined the traditional media were. Back then, people said the only accurate news was in the obituary section of the papers,” Etournaud said.

“I also discovered the key role played by the social media, Facebook and Twitter, during the revolution,” she said. “The Jasmine Revolution was called the first 2.0 revolution, where social media took over from the failing traditional media.”

“Eighty-five percent of the population had cellphones and roughly 55 percent of the Tunisian population had a Facebook account,” she said. “They were therefore very influential and helped spread the revolution. But at the same time the end of censorship had led to uncontrolled flows of fake news and disinformation was at its peak.”

“There was an obvious need for a new online independent journalism,” she said.

“Thanks in particular to her Mediterranean origins, Arianna Huffington supported the project from the very beginning,” Etournaud said, adding: “It was, and still is the only international global media to be present in the region.”

Launched in 2005, by Huffington, today HuffPost is a global pure player media, and one of the world’s largest media companies with 2 billion users. There are now 19 editions worldwide, the latest of which was launched in South Africa this spring.

“Everywhere else in the world, the HuffPost model, with no exceptions, relies on a joint venture between the HuffPost parent company in the USA, and a key local newspaper,” – Alix Etournaud, Founder & Deputy Chairman, HuffPost Maghreb

“We have Le Monde in France, El País in Spain, and for example La Repubblica in Italy,” she continued. “Usually the parent company controls 51 percent of the joint venture and the local newspaper controls 49 percent.”

However, the Huffington Post Maghreb model is different because it has no local newspaper as a partner, Etournaud said.

“We created it from scratch,” she said. “We couldn’t rely on a regional media group in Maghreb because it didn’t exist at that time. Furthermore, relying on one newspaper from one of these three countries would have created issues and concerns for the two others.”

“I decided to team up with some local partners so as to get the local knowledge and understanding,” she said. “None of those partners were in the media industry before. I also decided to rely on the global HuffPost team.”

The goal was to create a regional media for three main reasons, Etournaud explained: “One was to take advantage of the common language, culture and values of the three countries. French is still the second language in these three countries. The second reason was to neutralize the cost.

“The third reason,” she said, “was to create an attractive platform for a footprint large enough for the audience and the advertisers.”

It would have been financially difficult to create one edition in only one of these countries given their limited market and population, but it made sense to embrace the three together, she said.

“We are profitable mainly because of Morocco,” she said, “which is the country that has the largest market and which does 60 percent of our revenue.”