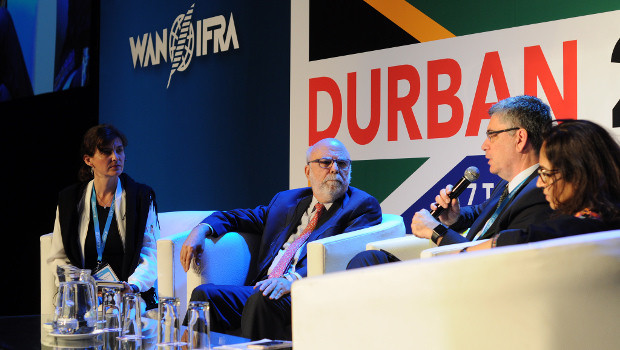 “We have to start by admitting that we’re the problem. We’re very quick to blame the environment or the ecosystem, but we need to look for the fixes ourselves,” said Ritu Kapur, CEO and co-founder of India-based The Quint, during the panel titled “Media: broken, or just misfiring?”, which took place at WAN-IFRA’s World News Media Congress in Durban, South Africa.

For the media industry, the advent of the internet gradually led to a loss of control over information, while people who previously depended on those “gatekeepers” found themselves confronted with a wealth of wildly different opinions, ideas, and perceived truths.

Moving into a new media ecosystem

Consumers have acquired power over information, said Rosental Alves, founder and director of the Knight Center for Journalism at the University of Texas. “We have moved from mass media to a mass of media. It’s a radical change for the industry,” he said.

The media industry finds itself in a time of transformation, and needs to move from the old top-down ecosystem – in which publishers determined which information was distributed to the public – to one that values the audience and interacts with it, Alves said.

“We come from a tradition in which we did not want to meet the audience. We were the gatekeepers that would provide, and they were a mass that, with a few exceptions, would not react. The great challenge of the next years is to build a different kind of relationship with the audience,” Alves said.

As a starting point, he shared a six-point plan for building trust and engagement with audiences that Mike Wilson, editor of the Dallas Morning News, has drafted:

The plan calls for more transparency regarding the work journalists are doing, clearer labeling of the different types of content they produce – from hard news to opinion pieces – and taking the audience more seriously.

“We’ve been talking a lot about business models, justifiably so, but we have to open new fields, like the relationship with the audience and how we present stories,” Alves added.

Kapur agreed the list was a good starting point, adding that at The Quint users can participate in morning meetings via Facebook Live. “The newsroom can be an echo chamber that sets the agenda, but the moment the viewers write in, it changes how you approach the day’s plan,” she said.

Digital media can bring journalists much closer to their audiences, she said. “As a broadcaster, I sat in this little ivory tower thinking I was the ultimate journalist, but when I moved from broadcast to digital it hit me that I’d never before been so close to the audience,” Kapur said.

One of the best times to be a journalist?

Building a strong relationship with one’s audience can also help boost trust, the media industry’s most important currency. “The only news organisations that will survive this transformation are the ones that are credible,” Kapur said.

Despite journalism’s shortcomings and the tough challenges it faces, all panelists were confident about the industry’s future.

“In today’s environment, our mission is more important than ever,” said Marcelo Rech, editorial vice president of Brazil’s RBS Group and former President of the World Editors Forum, adding that he wouldn’t discourage his children from taking up a position in the media.

Alves went even further, saying, “It’s one of the best times to be a journalist. It’s a privilege for this generation not to be the one that is ending the world but the one that is building a new media ecosystem, so I am very optimistic.”