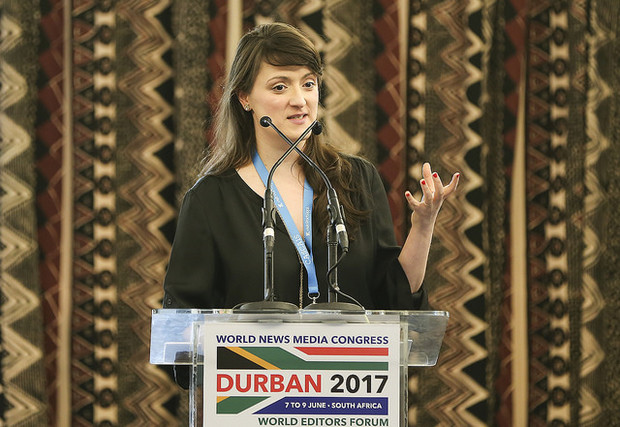 McDonnell highlighted the reputation of the Times and its editorial content as both a fundamental and sacrosanct part of the company’s business efforts.

“The integrity of the Times’ newsroom and editorial operation will always be critical to our success as a business. It’s equally important for our business strategy and our brand,” she said.

“Our integrity is why we have our audience, and our relationship with our audience is our brand. That’s why other brands want to work with us, too.” – Liz McDonnell, MD of Strategy & Insights, The New York Times

She also noted that NYT’s audience is both growing and becoming increasingly younger. Today, the Times has an average of 140 million monthly readers, McDonnell said, adding: “Our readers are also getting younger – in 2013, we reached 20 percent of millennials, by 2016, they were reaching 65 percent of them. And within our readership, millennials are the largest generational segment.”

In terms of its digital advertising business, McDonnell said she sees sponsorships becoming a key element as the Times moves forward.

“We’ve been thinking about sponsorships in a very different way. We’ve been thinking about them as aligning with original programming from our newsroom in a way that benefits both the advertiser and the Times, essentially allowing the advertiser to underwrite – but not actually affect – the coverage,” she said. “So, they’re benefiting from that promotion and the organic energy around it – these include new article series, service journalism and new formats: audio, video, VR.”

McDonnell mentioned one way the Times is doing this is through guides, such as one titled “Make the Most of the Met,” about how readers can more efficiently use the time they have to spend at NYC’s vast Metropolitan Musuem of Art.

“We’ve been doing a ton of these,” McDonnell said. “They are very popular with readers – very straightforward service journalism.”

Another example, she said, is a sponsorship the Times is doing with Samsung for a large-scale 360-video project for this full year.

“The newsroom wanted to do 360-video every day, and Samsung wanted to somehow provide technology, so it’s this massive program that’s done really well, very cool stuff, and our journalists get to use these tools that they otherwise might not have had to tell these stories,” McDonnell said.

“To bring this kind of content to life, the right partners are crucial because we don’t want to mess with the integrity of what the newsroom is doing,” she said, adding that it helps when the sponsors understand the benefit that they are providing and not trying to control what the Times is doing.

Looking ahead, McDonnell said the Times will also continue its trend toward product simplification.

“When I first started at the Times a couple of years ago, we had a lot of different products and different packages. With every new platform, we got all these new packages and new ways of talking about things. This has been a year of consolidation and clarity,” she said.

“We must relentlessly focus on clarity and repeatability for our canvasses: it’s the only way to clear the way for the exceptional work and to unlock creative potential,” she said.