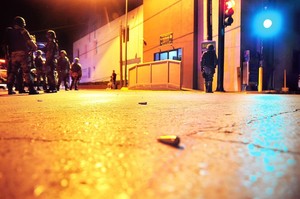 The newspaper reported that reliable, high-ranking sources from the United States government had warned them Friday about the risk of imminent aggression orchestrated by Nuevo Laredo’s municipal government and the state government of Tamaulipas.

The mayor of Nuevo Laredo, Enrique Rivas, has been hostile towards the media outlet in recent weeks. On May 29, Rivas publicly accused the daily of extortion without providing any proof following the publication of a series of investigations by El Mañana into cases of nepotism, conflicts of interest, and the misuse of public funds under his administration. The governor of the state of Tamaulipas, Francisco Cabeza de Vaca, has publicly supported the mayor’s position.

“It is disheartening to observe how local and state authorities continue to be one of the main threats to freedom of expression in Mexico,” said a statement from the World Association of Newspapers and News Publishers (WAN-IFRA). “A government has the duty of guaranteeing this fundamental right in any democratic society, not be its main adversary.”

In light of these accusations, the newspaper’s executives filed a complaint to the National Commission of Human Rights (CNDH) and have been integrated into the Mechanism of Protection for Human Rights Defenders and Journalists of the Mexican Secretary of the Interior.

The mayor of Nuevo Laredo and the governor of Tamaulipas are part of the National Action Party (PAN), whose officials met two days ago to prepare the party’s strategy ahead of the 2018 presidential election in Mexico.

“We call upon Ricardo Anaya, Margarita Zavala, and Rafael Moreno Valle, who are in line to become the PAN’s presidential candidates, to take a stand and denounce the hostility of their party representatives towards El Mañana,” said WAN-IFRA.

Since 2000, at least 13 journalists have been killed as a direct result of their professional activity as journalists in Tamaulipas. The strong presence of organized crime, aggression from authorities, and high levels of violence and impunity make the state one of the most dangerous places for journalists in Latin America. In February 2006, an armed group entered El Mañana’s newsroom firing bullets and a grenade, which left one journalist paralyzed and caused significant material damage. In May 2012, armed men fired bullets at the newspaper’s premises; no one was hurt. On March 15 this year, the Inter-American Commission on Human Rights (IACHR) of the Organizations of the American States (OAS), called the state one of Latin America’s main “Silence Zones”.