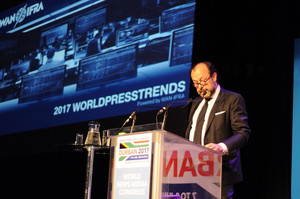 The full World Press Trends presentation can be downloaded below.

In its 2017 World Press Trends study, WAN-IFRA estimates that globally, 56 percent of newspapers’ overall revenue came from circulation sales (print and digital) in 2016. “The shift from advertising to reader-based revenue is reshaping the fundamentals of our industry,” said WAN-IFRA CEO Vincent Peyrègne who presented the key findings from the global study at the 69th World News Media Congress and 24th World Editors Forum in Durban, South Africa.

As the share of reader-based revenue continues to grow, newspapers are intensifying their efforts to foster loyalty and build communities of faithful readers.

“We have entered a pivotal moment,” Peyrègne said, “and more than ever our focus needs to be on our audience and producing high-quality, engaging journalism.”

Trust is the new currency

Mr. Peyrègne also called on news industry to take seriously the increasing number of surveys showing that people around the world are losing their trust in societal institutions, among them the news media: “The decline in trust is the biggest risk we face as industry, and all our efforts must be with the aim of getting it back.”

“We used to trade in attention. But trust is our new currency,” Mr. Peyrègne said. “Any decline in trust erodes the foundation of our business: credible, first-rate journalism.”

The issue of trust has also clear business implications: an increasing number of surveys shows that many people, an especially the young, are prepared to pay for journalism online – provided they see the publication as a reliable source of news and bond with its mission and purpose. “The evidence shows that our readers are hungry for credible journalism. We need to seize this opportunity.”

“The decline in trust is the biggest risk we face as industry, and all our efforts must be with the aim of getting it back.”

Mr. Peyrègne went on to underline the role of data in building stronger audience relationships: “Publishers are using their audience data more and more effectively to build a stronger relationship with them. Machine learning, predictive analytics and other AI methods can be employed to better understand readers’ expectations – and to convert audiences into loyal consumers.”

A fundamental shift in the newspaper business model took place two years ago, when reader revenue became the biggest source of revenue for news publishers. Global audience revenues grew by 2 per cent between 2015 and 2016, and by 7 percent between 2012 and 2016.

Meanwhile, global advertising revenues declined by 7 per cent from 2015 to 2016, and by 21 per cent between 2012 and 2016.  Although advertising revenues continue to decline in most markets, there are notable exceptions in Asia, Africa and Latin America, and rates of decline vary greatly between different markets.

Overall, total global newspaper revenues fell 2 percent in 2016 from a year earlier, and are down 8 percent over the last five years.