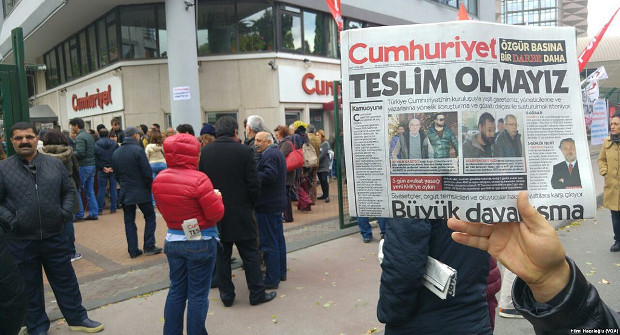 The police came in the early hours. Everyone was asleep… It was twilight…

Thirteen journalists’ homes were raided in the early hours of 31 October. The editor in chief of the newspaper lived in one. The CEO in another. Columnists in four, lawyers in three… the reporter, the ombudsman, the books section editor, the cartoonist, the accountant…

All were senior figures in the Cumhuriyet, Turkey’s oldest and most prestigious newspaper. Trying to reassure their terrified, bleary-eyed children, they were forced to watch as their homes and archives were turned inside out and computers were impounded. They were taken to the main police station first, then to the hospital for a medical, and finally to the biggest prison in the country. Placed in solitary cells, with no idea what their crime was. As it turned out, they had to wait for 151 days before they could learn. The indictments were announced on the 151st day: Aiding and abetting armed terrorist organisations.

Which organisations, I hear you ask?

Funnily enough, the risks posed by the Gülen movement had been flagged by these journalists, who were now accused of being Gülenists.

And the evidence, I hear you ask?

The reports, interviews, headlines, tweets and columns critical of the government. In other words, they would be tried on charges of journalism.

I, as the former editor-in-chief, was the number one defendant. And I was charged with altering the newspaper’s editorial policy. My first reaction was to exclaim ‘So what?’ Since when did prosecutors determine editorial policy for newspapers, anyway?

The answer is obvious: Since the President’s seizure of the media in his drive for absolute power…

Last year Erdoğan embarked upon a sweeping crackdown, accusing his former partner Gülen of masterminding the 15 July coup attempt. This was a ‘God sent’ opportunity to get rid of his opponents once and for all even as he purged the civil service of the Gülenists he had personally installed. Having secured absolute power with a declaration of state of emergency on the 20th of July, he then constitutionalised this de facto regime through a referendum held under ‘civil’ martial law conditions – an amendment rejected by half the nation, all the restrictions and controversial Electoral Commission practices notwithstanding.

Turkey had fended off the coup attempt on the 15th of July, but fell victim to a counter coup of Erdoğan on the 20th of July. Not a military rule, but a police state.

In the wake of the coup attempt, the number of journalists in prison quadrupled from 30; as the Cumhuriyet contingent joined the 120, Turkey became ‘the world’s biggest prison for journalists.’

The Constitutional Amendment elevated Erdoğan to the position of one man; one man to rule the Government, the Parliament and the judiciary, in charge of the mechanism that appoints judges and prosecutors. Not unsurprisingly, every journalist’s appeal for release was rejected. With a few exceptions, there was hardly any media left to criticise this turn of events: one jailed journalist is a hostage that silences several others outside. This was the method used to silence the Cumhuriyet, one of the last bastions of the free press.

Even the tea boy who runs the cafeteria was arrested; his crime being a gripe, ‘I wouldn’t serve Erdoğan tea if he came here!’ overheard by the police constable on duty at the paper, who informed his superiors. Lo and behold, the next morning our tea boy was taken into custody on a charge of ‘insulting the President.’

The Cumhuriyet is scheduled to appear in court on the 24th of July. The entire editorial team of a newspaper are scheduled to face a judge for the first time after 267 days. They will be defending not only themselves, but also the free Press, as well as a democracy that is fighting for its life in the hands of a despot.

If this is a coincidence, it certainly is an ironic one:

All our colleagues are invited.

Can Dündar is the 2017 laureate of the Golden Pen of Freedom, the annual award of the World Association of Newspapers and News Publishers (WAN-IFRA). Awarded since 1961, the Golden Pen recognises the outstanding action, in writing or deed, of an individual, a group or an institution in the cause of press freedom.

Behind the names of the laureates lie stories of extraordinary personal courage and self-sacrifice, stories of jail, beatings, bombings, censorship, exile and murder. One of the objectives of the Golden Pen is to turn the spotlight of public attention on repressive governments and journalists who fight them.
List of Golden Pen laureates: https://wan-ifra.org/node/34598/