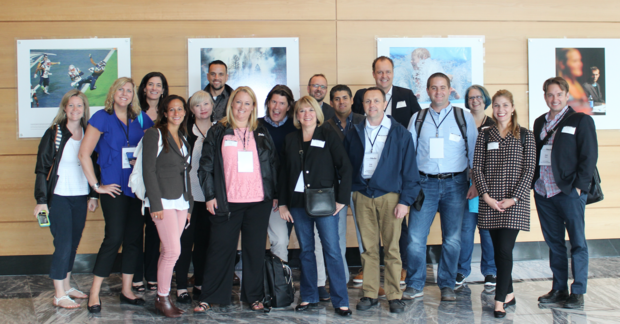 “Publishers are placing their bets in a lot of different areas,” says Lane, who will share some of her insights at WAN-IFRA’s Digital World Conference during the World Publishing Expo in October. “There is no silver bullet, there is no one-size-fits-all when it comes to media transformation. It depends on the size of your company, what kind of scale you have and the market(s) that you operate in, and what the best strategy is for you.”

Lane recently led a number of Innovation Mission tours in the US, visits that included the likes of The Boston Globe, Google, Gannett, GateHouse Media, the McClatchy Video Lab, Texas Tribune and Jim Brady’s Billy Penn.

“We’re seeing the bigger companies leverage the scale that they have, and they are doing amazing things that our LMA members in smaller markets simply can’t relate to, and would not be able to do because they’ll never have that kind of scale.”

“With a company like Tribune, a large broadcasting company, or Gannett with USA Today, or TEGNA, another large broadcasting company, they are successfully monetizing on Facebook,” she says. “But if you look at the audience they have on Facebook, and the scale they have, you can understand why they would be successful. You always see the headlines that you can’t monetize on Facebook, or that nobody is making any money on Facebook, but we heard from numerous companies on the Innovation Mission that ‘We’re making some pretty good money on Facebook,’ but they are all huge companies.”

“We had Erica Smith from The Virginian Pilot on our tour, she’s the digital editor there, and they get 175 to 200 email subscribers a week from Facebook Instant Articles for their food newsletter, which she’s in charge of. And she said they are high quality, low churn and they can then really monetize that food newsletter at high CPMs because it’s a very niche audience,” Lane says.

“We feel that media companies have to experiment with Facebook in particular, but also with Google and Apple and others, and find a model that works for them and leverage those platforms to their benefit,” she adds.

Considering the area of paid-content, Lane sees it working better for large US publishers than for small ones.

“At The Boston Globe, they are doubling-down on digital subscriptions. That’s a good strategy for them – but it’s not transferable to most of our LMA markets,” she says.

This is in large part due to the fact that the Globe, like publishers in other major markets is able to attract a significant number of subscribers from outside its market, be it from people who used to live there, have close friends or family living there, are considering moving there themselves, or are fans of the city’s professional sports teams, and so on. For small publishers in less populated markets, those numbers are far too low to ever translate to meaningful income.

“First and foremost, pick your bets and then invest in those areas,” she says. “Invest heavily and commit to it. Don’t be halfway in. A lot of companies will launch a digital agency and then six months later they’ll close it. That’s no way to treat a new business unit. That’s one thing we are seeing from the successful companies.”

“Digital is a very key part, and usually that’s some kind of digital marketing services or a digital agency, or native, but it’s not just digital: it’s also events and promotions,” she says. “GateHouse goes so far as to say there are three pillars of transformation for them (digital, events, promotions). And if you look at GateHouse’s footprint and the markets they operate in, which is a wide variety, but generally small and medium-sized, that is a really good strategy going forward because digital alone is not going to make up the print dollars.”

Another key learning from LMA’s Innovation Mission is the urgent need to improve the overall experience for users.

” ‘Don’t punch the user in the face,’ is a phrase that we now keep using and it came from Jim Brady of Billy Penn,” says Lane. “He said: ‘What are we doing as an industry? Slow load times. Pop-up ads. Ads that people hate and won’t ever click on. So, we’re not doing the user any good, we’re not doing the advertiser any good, but we continue to pursue these models. Would you ever see that on Facebook or Google? No.'”

“We need to start putting the user first if we want to be serious on the digital side of our business, and it was really nice to see that companies like Gannett and others were moving in that direction,” she adds.

A return to storytelling

One further trend, and one that Lane says she is happy to be hearing about is a renewed emphasis on storytelling.