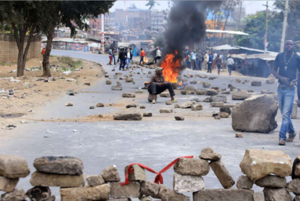 Bernard Mwinzi, a journalist at Kenya’s Nation Media Group and a member of WAN-IFRA’s Media Freedom Committee, is one of the lucky ones. Unlike some of his co-workers, he didn’t face any direct threats while covering the election. But, he says, he was still privy to the fear and intimidation that lingered over the election season.

“There was always a cloud of disapproval regarding my work,” says Mwinzi, who says he was uncomfortable during certain campaign rallies or gatherings. “On several occasions, depending on the mood of the crowd, I was forced to hide my press card and job tag, just in case the crowd turned hostile… Other [journalists] had their equipment temporarily confiscated or completely destroyed, while yet others were physically harmed.”

When the election results were announced, which were immediately disputed by Odinga, the opposition called a rally in Nairobi. There, a senior politician told the crowd to stop consuming the news products of the Nation Media Group due to their supposedly biased reporting, says Mwinzi.

“Our reporters, who coincidentally were the only ones covering the rally live on TV, were forced to retreat as the crowd turned hostile on them,” says Mwinzi. “In the end, we recalled them to the office, asking them to hide their newsroom badges as they sneaked from the venue.”

While Kenya and the international community were on high alert ahead of the elections, with rights organizations recording pre-election violence and threats towards journalists, it wasn’t enough to protect everyone. The Center to Protect Journalists (CPJ) has compiled reports of at least ten journalists who were assaulted or harassed while reporting on the elections.

Matina Stevis, the Africa correspondent for The Wall Street Journal, told the CPJ that she was hit over the head with a wooden stick by a police officer on August 12, while freelance journalist Neil Shea said he was attacked and beaten by security officers while shooting a documentary before his camera was destroyed and memory cards stolen.

In addition, Simon Achola, a reporter with the Kenya Broadcasting Corporation, attests that security personnel took his phone and deleted his photos of protests. Kenya Television Network journalist Duncan Khaemba was arrested on 12 August for allegedly using a helmet and body armour without carrying the appropriate license, and one journalist, who spoke on the condition of anonymity, says that online trolling and harassment of the foreign press was at a high during elections.

In addition to harassment and attack, journalists have fallen prey to intimidation and censorship during their reporting of the elections, often by government entities. Already, the 2013 Kenya Information and Communication Act (KICA), which threatens journalists and media companies with fines for breaching a code of conduct laid out by legislators, is seen by many as a way to restrict press freedom.

And in the lead-up to the elections, Joe Mucheru, the Information Communication Technology Cabinet Secretary, threatened to cancel the licenses of media organisations that announced the results of the elections before the Independent Electoral and Boundaries Commission (IEBC), the official elections agency.

The government also made it more difficult for journalists to get access during the announcement of election results.

“There were several cases where the process to get press accreditation by the IEBC was delayed so there weren’t as many journalists in the tallying centres,” says Henry Maina, Director of Article 19 Eastern Africa.

And while a 10 August press release by the Kenyan government attempted to reiterate its call for calm during the elections, many interpreted it as a way of silencing the media. In the press release, it says that it took offense from international media houses that used images and video from 2007 to create a “misleading impression of the security situation in the country.”

“We continue to urge the media to seek clarification and verification from authorities before publishing any security related information so as not to cause undue alarm and tensions in the country,” the press release continued.

The controversial 2007 presidential election, which saw President Mwai Kibaki declared the winner over Odinga, caused two months of fighting that left over 1,000 people dead and up to 500,000 internally displaced.

In other instances, the threats to journalists were more subtle. According to Article 19’s Maina, many media houses were bombarded with fake news or saw their websites clogged with counter information, bogging down journalists so they wouldn’t know what to publish or not. Television stations were asked by certain political actors not to give airtime to opponents, and politicians used their influence on advertisers.

“Media houses were under a lot of pressure in regards to advertising,” says Otsieno Namwaya, Africa researcher at Human Rights Watch. “Advertisers threatened to take away ads or told the media to tone down criticism of the government.”

In addition, in the months leading up to the elections, the government created a policy against media buying, which starved media organizations of government advertising revenue. The concern, say journalists, is that the policy could cause media managers to pressure editorial divisions to publish government-approved content, thus eroding credibility.

Despite the challenges of reporting on the Kenya elections, a safety training organised by the WAN-IFRA Kenya Media Freedom Committee in collaboration with IREX near Nairobi just weeks before Kenyatta and Odinga went head-to-head provided participants with the necessary tools.

“Nation Media Group journalists who had attended a newsroom safety training outside Nairobi in the weeks to the elections said they felt better equipped to and prepared to handle the pressures of the job, says Mwinzi, “particularly the trolling and name-calling on social media.”

On 25 August, Kenya’s election commission rejected claims by the opposition that the presidential elections were marred by fraud. Over the weekend, the Supreme Court began hearing the case ahead of their expected 1 September verdict. In the interim, local and foreign journalists covering the final results of Kenya’s elections remain on their guard.