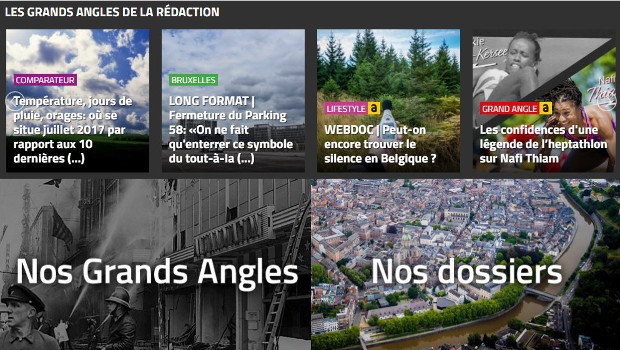 “The idea behind the weblab was to improve the articles that are behind the paywall, and to create a better reading experience for subscribers, so to speak,” said L’Avenir journalist Arnaud Wéry, who regularly works for the weblab.

Three journalists and three developers are involved in the weblab, working in tandem on a variety of projects. Set up in March 2017, it is part of a broader initiative focusing on making local news more appealing to subscribers.

In 2016, the website lavenir.net recorded 144,800 visitors per day on average. In the same year, the nine daily regional editions of the L’Avenir group, which focus on Belgium’s Walloon region, had a combined daily circulation of 86,800.

“We really want to address the needs of our subscribers,” Wéry said of the weblab.

“We are a regional daily, so we won’t do any long-format content on international issues. It’s really about what’s important to the local community, and telling these stories in a different way.”

Since the launch of the lab a few months ago, around 50 projects have been developed. These include a multimedia feature on young people in the Belgian district of Molenbeek, an interactive map helping readers find the best places to go swimming in the Walloon region, or a long-format piece profiling local people fascinated with the US, which was produced to coincide with the 4th of July.

“Before this, we only had a few articles with visual elements, but now we’ve really been able to increase our output in this regard,” Wéry said.

One of the main goals of the small team is to be as efficient as possible when it comes to creating content.

“We try to take a bit of an industrial approach, to have a base format we can build on, so we don’t have to start from scratch every time. It’s about good time management, and making the right assumptions about how long a project is going to take,” Wéry said.

The work of the journalists and developers is quite varied, ranging from pursuing their own ideas and projects to producing content such as infographics or interactives in a matter of hours as a response to breaking news events. Additionally, they assist other journalists in presenting online content, encourage them to suggest projects, and help adapt print content for the web.

While Wéry says they have yet to compare the performance of the weblab content with regular articles on the site, the results so far have been encouraging.

“Some of the long-format stories have done really, really well, with a high number of readers and long engagement time. Those were stories with lots of visual elements,” Wéry said.

To boost the longevity of some stories, the team spread them out over a week, adding an additional chapter each day, which also helped boost engagement time.

Additionally, it is planned to create a small survey for readers to gauge their opinion of the content, and the way it is presented.

The team also keeps track of reader and engagement time data. Every three months, they meet with the head of the digital team to discuss the statistics.

“We look at what worked and didn’t work, whether we worked efficiently, and what other ideas we could develop,” Wéry said.

“We really need to stay on top of the data to find out if that’s what the readers want, and if we’re going in the right direction. But for the time being, I think what we’re doing is working.”