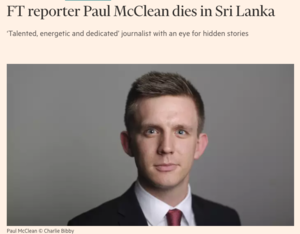 Paul McClean, 24, joined the FT two years ago as a graduate trainee. Talented and insightful, he was considered a rising star – and at the time of his death he was working with the FastFT team in London.

While in Sri Lanka on holiday this week, when he was apparently dragged into a lagoon by a crocodile. His body has since been recovered but the official cause of death not yet announced.

‘Talented, energetic and dedicated’ journalist with an eye for hidden stories

271 people are talking about this

McClean studied French at Oxford University and it was during his year abroad in France, in 2014, that he joined the Paris editorial team of WAN-IFRA as a blogger.

It was clear he was going to do well, tackling with maturity media stories with complex ethical issues. One such report dealt with new laws in Spain to prevent news aggregators Spain reproducing other’s content without payment.

World Editors Forum Executive Director Cherilyn Ireton paid tribute to Paul. “He was smart – and clearly destined for a distinguished career as a journalist. His untimely death is a blow – and those who worked with him in Paris send condolences to his family, friends and colleagues.”