Headed by Philip Faigle and Christian Bangel, the idea for the department, dubbed #D17, started to take shape after Donald Trump was elected as president of the United States.

“The election of Donald Trump marked the second time within a short time frame that predictions on voting behaviour made by trusted and leading experts turned out to be inaccurate,” Faigle said.

“We then looked at how American media outlets were dealing with the outcome, and what they thought may have caused them to misjudge tendencies and trends, particularly in rural regions. With this in mind, we asked ourselves at the beginning of the year how we could avoid making similar mistakes in our coverage of the federal election, and decided to set up a small pop-up department that addresses these observations.”

Launched in February, the “pop-up” department’s mandate was clear: to look beyond election predictions and make its coverage as inclusive and representative of the German population as possible.

Involving journalists from across the group – Zeit Online is the digital presence of the weekly newspaper Die Zeit –  a number of editorial series and projects have been created under the #D17 umbrella.

As part of the series “Heimatreporter” (Hometown reporter), journalists from Zeit Online and Die Zeit head back to the towns they grew up in, covering issues relevant to the local community and giving a voice to people that might not usually be featured in the group’s coverage. So far, they have reported from dozens of locations across Germany, producing a wide range of stories.

“Überland” (Overland) is another series with local journalism at its core. Zeit Online joined forces with seven freelance journalists scattered across the country who write one to two stories per month about their respective regions and patches.

“Creating local journalism for a national audience was a new thing for us. And it’s an experiment that has actually worked out rather well, also in terms of reach,” Faigle said.

“The performance of these stories has been quite surprising since, at times, they’re the most read stories on our site, before stories about Trump or Erdogan, for example. It’s shown us that our readers care about these local events, and helped us figure out how to tell these stories for a national audience as opposed to a local one.”

In part, the launch of these two series was prompted by the fact that 70 percent of Germans live in towns with a population of less than 100,000, Faigle said.

“Given that our newsroom has a more metropolitan focus, we asked ourselves if we’re actually representing the reality of these people well enough, and thus decided to launch ‘Überland’ and ‘Heimatreporter’.”

Other series that are part of #D17 include “Diese Wähler” (These voters), which consists of interviews with eligible voters from various backgrounds, as well as “Jung und konservativ” (Young and conservative), published on the student-oriented website, Zeit Campus.

With these editorial series, Zeit Online has been able to expand its coverage and better represent people outside of metropolitan hubs. Another aim of the project, Faigle said, was to address the perceived division and lack of communication among people on opposing sides of the political spectrum.

This gave rise to ‘Deutschland spricht’ (Germany talks), an experiment designed to bring people with differing views together, and have them discuss current political issues.

At the beginning of May, Zeit Online readers were asked to answer five polarising “yes” or “no” questions posted to the website, such as whether Germany had taken in too many refugees or if the west was treating Russia fairly. Within four weeks, around 12,000 had filled out the questionnaire, and provided additional information such as a contact number and their postal code. The Zeit Online team then verified people’s existence, weeding out whoever lived outside of Germany or who couldn’t be contacted via phone, which left them with around 5,500 people.

The remaining participants were then matched with a partner, based on their location and how different their respective answers were. In the end, 600 pairs agreed to meet up with each other for a political discussion on the 18th of June.

“With ‘Deutschland spricht’, it became clear that there’s a very high willingness of our readers to communicate with other readers that have a different political mindset,” Faigle said.

“We got a lot of positive feedback, and it seemed people were excited about having been given the opportunity to meet up in person and have an actual political discussion. Our readers seem to want that, and that’s very promising.”

Reporters attended and wrote about some of the meetings, and a collection of selfies sent in by reader pairs is available on the Zeit Online website. Jochen Wegner, editor-in-chief of Zeit Online, also participated in the experiment and published a story about his experience.

Another project part of #D17 was the introduction of a tool on the site, which gauges readers’ moods by encouraging them to either hit the “good” or the “bad” button, and to describe how they feel with an adjective. Almost a million readers have used it so far, and, interestingly enough, the overall mood remains pretty steady, with 70 percent of people usually describing it as good.

Taking predictions with a grain of salt

With the election now only a few weeks away, the latest series, dubbed “Fünf und der Fisch” (Five and the Fish), aims to provide a critical view on predictions.

Launched last Thursday, it features five leading experts (a historian, a statistician, a sociologist, a social scientist, and a former deputy government spokesperson) who will provide critical coverage of the election. Additionally, as a tongue-in-cheek nod to ancient animal oracles, a fish has taken up home in an aquarium in the newsroom. Based on its movements recorded by a thermal camera, it’s making its own predictions about who’ll become Germany’s next chancellor, depending on whether it spends more time on the left or the right side of the aquarium. 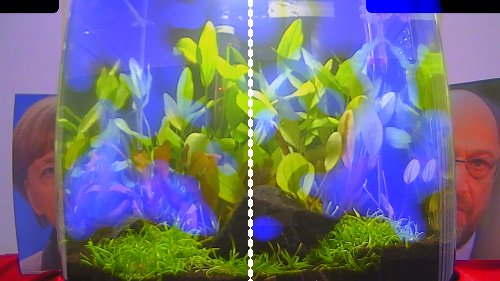 “The idea behind the series ‘Fünf und der Fisch’ was that we’ve realised how difficult it is to predict the future, especially concerning politics,” Faigle said. “The surprising outcomes of the US election, the French election, as well as the Brexit vote have shown us the importance of keeping an open mind, so we’re approaching the last four weeks before the election with a bit of humility and without blindly trusting current predictions.”

While #D17 is set to run until the end of the year, Faigle said they are currently discussing what it could look like in 2018.