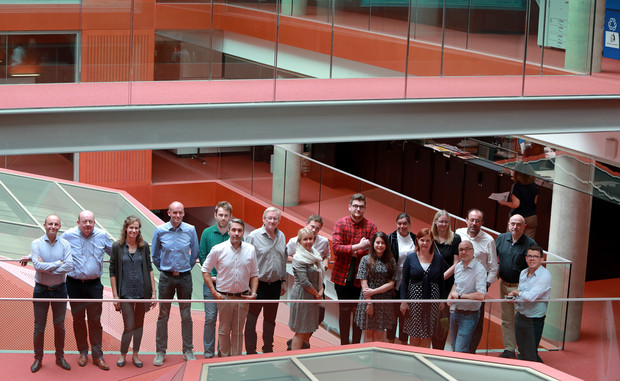 Organised in collaboration with Sud Ouest newspaper in Bordeaux, France the 20 participants in Global Alliance for Media Innovation’s (GAMI) first Media Lab Day met each other in start-up accelerator Théophraste.

Before launching Théophraste in 2015, Guillaume Vasse called WAN-IFRA to ask whether anyone else in the news industry was working on a similar initiative.

“He wanted to start a media lab and was wondering whether we knew anyone who was doing something similar,” says Stephen Fozard (GAMI Director) while welcoming everyone to the event. “And talking to heads of media labs over the past years, we realised there is a broad wish for them to meet people that are doing similar things. They often feel like the odd-ones-out in their own news organisations.”

Kicking off the first round of pitches from the diverse collection of labs, accelerators and other innovation units, Lina Timm (Media Lab Bayern) confirm she felt kind of lonely during the first few years of creating the lab, “until I realised similar initiatives were out there”.

According to Trine Nielsen (DMJX Media Maker Space) “everything happens in collaboration” and the reason for Denis Teyssou (AFP Media Lab) to come to the Media Lab Day: “sharsing. Because it’s important.” Concluding his presentation with the hope that the media lab day would open up possibilities for exchange and collaboration in the future.

After the first four pitches, this spirit of collaboration was demonstrated by Kim Svendsen (Stibo Accelerator), who shares a Drive document to track the topics discussed: “While I was taking notes for myself during the presentations I realised how stupid it would be to keep those notes to myself.”

During the rest of the meeting, the participants added more than 30 important topics and innovation ideas to the shared document which will now work as an idea-bank for the group. This illustrates the desire to collaborate and share openly among the group.

The ideas ranged from the relevance of different technologies for the media industry to best practices in facilitating innovation, and formed the basis of the brainstorm sessions the next day.

Théophraste occupies a beautiful office on the fourth floor looking out over the Garonne river and Bordeaux’ city centre. It was important to integrate Théophraste into the news organisation instead of housing it somewhere else, says Guillaume Vasse during the visit of the accelerator. But they didn’t simply offer them a free space in the building. Vasse: “This is the former chairman’s office. He decided to move to a smaller office, so the space could be used for innovation.”

Similarly, Katharina Schell (APA-medialab) talks about the importance of bold management. Even if nobody seemed to really understand what that meant at first:

“when APA got a new CEO, he had a sort of vision. It turned out to really be a vision later, but in the beginning it was just an idea. ’We need a media lab’, he said.” Until then, the innovation strategy had been – bluntly put – ‘Please innovate more and do it more quickly’. “We have a lot of cool people with a lot of cool ideas,” Schell adds, “but they had nowhere to go.”

Editorial innovator Katharina Schell (APA-medialab) is working part-time with the media lab and part-time in the newsroom. Like many of the labs, APA-medialab is using design-thinking methods inviting various actors to work intensively on a specific subject during a very short period of time. This is bringing them a lot compared to before: “the innovation method in APA used to be centered around writing PDF reports, and everyone would fall asleep after page X.”

The wish to work together did not prevent the participants from challenging each other’s methods and opening up possibilities for constructive debate.

Trine Nielsen (DMJX Media Maker Space) observed that most innovation labs are working on commercial solutions instead of working on solutions that actually change the ways journalists work, before going on to say “I’ve heard a lot of people talk about design-thinking today. We’ve tried design-thinking too. But the problem with design thinking methods is that people have forgotten how to be creative. That’s the real challenge for innovation.”

Ideation at the Cité du Vin

After a night in Bordeaux, the heads of media labs meet again at the city’s wine museum – Cité du Vin – the next morning. Having written all possible ideas for topics on post-its, Lina Timm (Media Lab Bayern) takes charge of organising the ideas.

This resulted in 3 working groups: Start-up acceleration, cross-industry collaboration and personalisation. With support from GAMI, each group will develop a common project over the next few months and will share their insights at the second Media Lab Day in Munich.

The Media Lab Day on 8-9 September in Bordeaux was the first live event connected to the ongoing Media Innovation Mapping project. Read about the 30+ Media Labs we talked to so far or contact us to share your story.