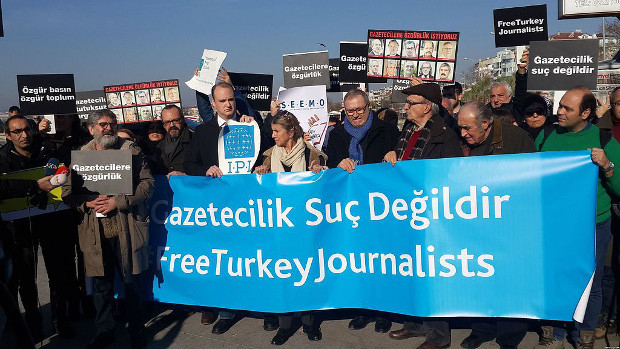 Can you spare a little time? I want to tell you something.

People argue about my husband, Deniz Yücel, so much and so loudly that it’s easy to forget what this whole issue is actually about. And both sides in this fight seem to understand each other less and less.

That is why I direct this text at the people who think it’s right that Deniz is in prison, who cannot understand why the Turkish government is being criticised so much about it. If you are one of these people, than this text turns to you directly. And if you are not one of these people, then this text might help you to understand, what I think and feel observing that fight and why I try to find a different language.

I hope to pierce the wall of deafness with this, my scream. Do not cover your ears. Hear me.

But first, promise that you will drop all preconceived ideas, raise yourself above all blindly-accepted beliefs and listen. You have nothing to fear from me, so do not get angry, just listen. It matters not whether you like me or not, just listen. Hear me.

Had I been given the chance to publish this piece anonymously, I would have done so. Just so that you would not file me away in your head under the title ‘Deniz Yücel’s wife’. I want these words to remain separate of their author and free of the burden of both prejudice and of assumed support.

I’m putting before you a piece of writing that is independent of myself and of Deniz too.

Forget my identity. These words belong to a person who has studied sociology and philosophy, who has set foot in almost every city of the Turkey you might be missing now, if you are a Turk living abroad; I’m a person who could tell you the names of all the trees of the Black Sea and flowers of the Mediterranean, from memory, and who has lived in Paris, Brussels, worked in Qatar and Kuwait;  a person who has worked for ten years in the media and who lives in and loves Istanbul and thinks it the most beautiful city of all.

Leaving your sadness in the locker

I started this piece as I was travelling to that place I would set off for at 6.30am every Monday morning; that place that had forcefully entered our lives. By which I mean, the prison. I really wish that you could have had the experience of visiting that place, just once. Having said that, I would never wish that a loved one of yours would be ‘unjustly’ locked up, not even if your heart was a stone hewn from senseless hate. I would only wish that you had experienced this once, so that you may better understand me. That’s all.  Because then you would understand what injustice means. Then you would understand what it’s like to have to struggle just to try (and fail) to get the prison authorities to let you take in a colourful set of bedding for your loved one. Then you would understand that justice should not have an arbitrary application that changes from one person to another.

Do you know what it is, to lock up your sorrows in a security locker?

In prison, in the place where I’d have to undergo an eye-scan, just before I got to Deniz, having already registered and been given my visitor card, there were security lockers. You would hand in your mobile phone, keys and other items at the entrance and these lockers were where you’d leave the smaller things in your pockets, like small change, your watch etc. I would always leave a cigarette in there, for after I’d visited Deniz. These were the visible things.  There were also invisible things I’d leave in the locker. My insomnia, my tiredness, if I were ill: my illness. Before going in to see Deniz I’d leave all my frustrations in that locker; so that I’d appear well before him, even if I hadn’t slept for two nights.

And I would have been going home to sleep, having left my fingerprints pressed onto the glass between us, that separated Deniz from me and Deniz from his freedom. For months, my Mondays have consisted of this. So, for once.. just for once will you put yourself in my place?

The law, freedom of thought, justice…

I’d like to introduce you to the ‘Presumption of Innocence’, let’s see what it has to say:

‘No-one may be presumed guilty, or treated as being such until their guilt has been steadfastly established by a fınal court order.’

The principle of presumption of innocence is clearly laid out in Articles 15 and 38 of the Constitution of the Turkish Republic, in Article 6 of the European Convention on Human Rights and in Article 14 of the United Nations’ International Covenant on Civil and Political Rights. The presumption of innocence that stems from the principle of a ‘Judicial State’ has a two-fold role of protecting the ‘honour and dignity’ of the person and assuring a ‘fair trial’.

Article 26 reads as follows, under the heading of the freedom to express and publish one’s opinion: ‘Everyone has the right to express and disseminate his/her thoughts and opinions by speech, in writing or in pictures or through other media, individually or collectively. This freedom includes the liberty of receiving or imparting information or ideas without interference by official authorities.’

The Law, the judicial state, fair trial, freedom of thought, justice.. These don’t only belong to Deniz, they are something we will always need; all of us.

Deniz has been imprisoned for 200 days. He’s in solitary, alone. I mean solitary confinement, that inhuman method that serves to ruin a person’s complete physical and mental health in the long-term. To alienate a person from nature, his or herself and from the outside world. A mechanism  designed to make a person fall apart within. This mechanism, which is wholly unnatural to the individual and which provides them only with limitations and restrictions leaves nothing but damage on a person.

I’m not interested in your political persuasion, your gender, nationality, the team you support or your favourite food. I am only concerned with the fact that you are a person. Deniz too, before he is my husband or a journalist, is first of all a ‘person’. You and I meet under the shelter known as humanity.  Solitary confinement is a method that goes against our humanity. Do you realise that?

The fact that those people whose names you are familiar with are journalists makes them seem pretentious, or conspicuous these days; but that does not make this injustice any more or less acceptable than other injustices. There are thousands of people in prison whose voices cannot be heard, who are being held unjustly.

For example, you will all have heard of the ‘imprisonment of journalists’ in relation to the Cumhuriyet case, won’t you? I’d like to make a point here. The reporters of Cumhuriyet newspaper have been detained for months, have been in solitary for months. Don’t put detainees in the front row just because of their profession. We are all just people who are as invisible as ants from space. The freedom of one of us is not more or less important than the other. None of us is more important than the other. We are the same. We are equal.

The grounds given for Deniz’s detention were newspaper reports and articles that he’d written that were already outside of the time-limits for prosecution under media law (there were also false translations); in other words, they were all ‘journalistic’ activities. Before his indictment was even written or he had been before a court he was made into a target, with surreal and fabricated allegations being made against him. I’d like to refresh your memory, Deniz went ‘of his own accord’ on the 14th of February to give a statement.
His writing is sharp and lively and sometimes, yes, indulgent. But whether you like Deniz or not, he carries a great deal of goodness in his heart. Do not stop listening. Hear me!

Because Deniz is a journalist

It’s very busy on the outside, there’s a lot of noise being made. When really, there is no point. Deniz is here, he’s not going anywhere, just as he went to give his statement of his own accord, so there is no other option other than being justly tried. Very well, he could be tried whilst on bail.

The answer is quite simple: Deniz is a well-respected journalist in Germany, he is the Turkish correspondent of Die Welt newspaper. He is a journalist who is completely in love with his work. He is better known in Germany than he is in Turkey. And Turkey did not know how well known and important a journalist he was until he was arrested.

In countries where there is law and democracy even a child could not fathom how a person can be arrested and detained simply for working as a journalist.  That is why the reactions in Germany can be viewed only, and I mean only, as people or the state ‘standing up for journalists who carry citizenship of their country.’ It’s no more than this.

Whether it be due to political games or obstinacies, a referendum in Turkey or elections in Germany, it is wrong to interfere with a person’s life and freedom, and in my view that will only lead all parties towards a fire following which nothing will remain but ashes.

Open the door, it’s me. It’s me, and I want only to say this again:

It has been 200 days since the most precious flower in my garden was brutally snatched away. But even with this polyphony of sound outside, the only sound I pay attention to is Deniz’s laughter. Despite it all, we will come out of this process as beautiful as flowers.

Now step outside the cave, please. Please put your head outside. Do not be a captive of the shadows, and do not believe only what is being shown to you.

During this time we have had to become accustomed to countless absurd routines that serve only to scream in the face of our distress and the injustice we have suffered. If you ask what is the difference between day 200 and day 78, there is no difference. The days are the same.

Do you know that sometimes a burden you bear mentally is more exhausting and can hurt you more than a physical injury? I would have prefered a thousand times to have borne a physical wound on my body than to have been mentally shackled to Silivri.

I would try, at the end of my visit, to blow away with my breath and with all my strength, like a child, all of the potential negative effects upon Deniz of solitary confinement.

Translated from Turkish by Caroline Stockford