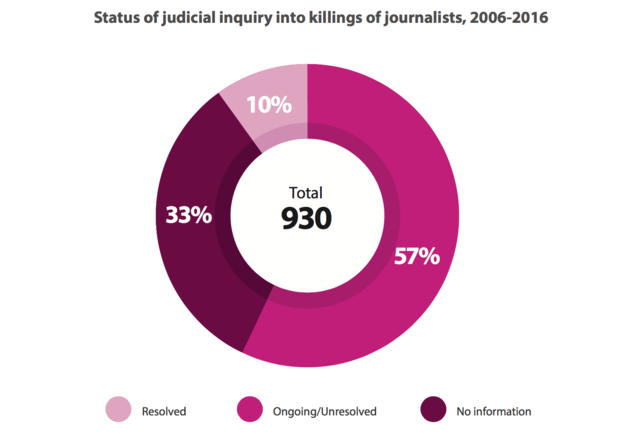 A message from the Assistant Director-General for Communication and Information, UNESCO, to mark 2nd November, International Day to End Impunity for Crimes Against Journalists.

Since its proclamation in 2013 by the United Nations General Assembly, the International Day to End Impunity for Crimes against Journalists on 2 November represents a unique occasion to reflect upon the tremendous consequences that impunity for attacks against journalists has all around the world.

Over the last eleven years, 930 journalists have been killed for bringing information to the public. On average, one journalist is murdered every four days. In addition to this worrying number, in more than nine out of ten cases, the killers go unpunished. Impunity often leads to more murders and can signal the breakdown of judicial systems, the rule of law and democracy. As the United Nations agency in charge of fostering freedom of expression, UNESCO has been advocating for reinforcing the fight against impunity for crimes against journalists.

I take this opportunity to invite you to join the worldwide actions to commemorate this year’s International Day to End Impunity. It is an occasion to honour journalists who have died in the line of duty, as well as a day to reinforce global efforts to put an end to impunity for crimes against journalists.

I am inviting you to work together with other media to pool efforts, to share good practices and to expand the coverage on attacks against journalists, including by publishing front page stories. This could be, for example, a story on a journalist’s killing in your country or a story covering whether there is judicial follow-up by public authorities.

It has also proven to be of great impact when journalists from various media, beyond their differences and editorial lines, work together to publish a story on a killing of a colleague journalist in their country where the perpetrator has gone unpunished. Such cases should be thoroughly investigated and prominently published and broadcast. This can be a powerful means to denounce these crimes.

UNESCO and its partners will be organizing commemorative events on 2 November worldwide. It would be good to see the media, within their own capacities and independence, joining these global efforts, and we invite you to consider coverage of these as well. On 2 November, UNESCO will release the UN’s official figures on killings and impunity to date, and these may also be newsworthy for you.

Earlier this year, stakeholders of the UN Plan of Action on the Safety of Journalists and the Issue of Impunity gathered in Geneva to strengthen their future work and concert action for the years to come. Some of the options resulting from the Consultation particularly concern the role of the media in ensuring journalists’ safety and combatting impunity. If you would like to find out more, I encourage you to read the options on the website of UNESCO, which propose concrete actions, including by media, to strengthen the safety of journalists and fight impunity for crimes against them.

The United Nations have recognized the vital importance of access to information to achieve the 2030 Agenda for Sustainable Development. In particular, Goal 16 calls for “Promoting peaceful and inclusive societies for sustainable development, providing access to justice for all and building effective, accountable and inclusive institutions at all levels.” It is only when journalists can work in a safe and independent environment, that there can be a free flow of information for all citizens to access and that sustainable development can be achieved.

You can visit the dedicated website to find out more about the International Day on 2 November: https://en.unesco.org/endimpunity-2017. For further questions and the most recent information on killings of journalists and impunity, do not hesitate to contact Mr. Mehdi Benchelah, Senior Project Officer.