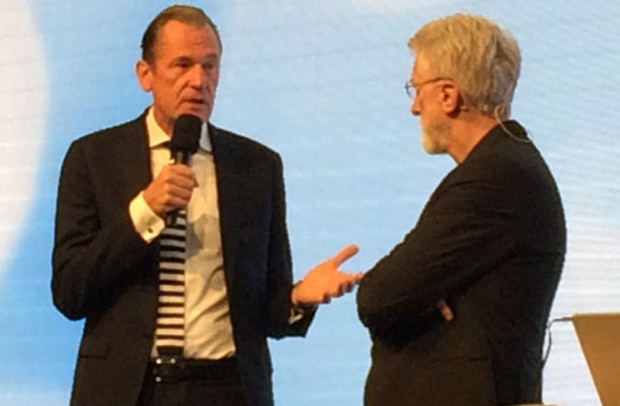 “We have to wait to see how these new products pan out, and to really analyse if they are fair and serving the interests of publishers. But so far it looks pretty good,” said Döpfner. “It’s not publishers against platforms; it’s a relationship of frenemies. We have opposing interests here and there but also mutual interests. I’m optimistic that it’s going in the right direction.”

He wasn’t ready to declare peace just yet but the following statements map out where he thinks publishers’ strengths lie.

“The most important thing for a healthy ecosystem is diversity in voices and products. You should have mass market players, local and niche players. The more diversity in news and information, the better it is. The big equation here is will we have a fair relationship with the platforms for all that to work. This is a real crucial question.

“People say that brands don’t matter in this confusing news environment, but I would say the opposite is true. This is where we can absolutely distinguish ourselves and build a future.”

Here is a shortened and edited version of the Q&A.

Jarvis: Google has announced that it will ditch its First-Click Free policy in favour of a Sampling Model. Both Google and Facebook will offer new subscription models for publishers, and are generally engaging more with publishers. Is there peace in the kingdom?

Döpfner: It’s a very encouraging signal (that Google changes its First-Click policy). Indeed, we have had a lively debate over the years, and it’s normal that new technologies and businesses develop, especially at the beginning, to try to get everything as good entrepreneurs. They’re not in the business to make compromises. But they are all beginning to realise that there is a need for great, trustworthy and relevant content out there. It is also in their interests that former legacy publishers defend and protect their businesses to help secure an open and free society. So there is really progress.

“We’re not here to declare peace.” Döpfner on Google #IFRAexpo

We have to wait to see how these new products pan out, and to really analyse if they are fair and serving the interests of publishers. But so far it looks pretty good. It’s not publishers against platforms; it’s a relationship of frenemies. We have opposing interests here and there but also mutual interests. I’m optimistic that it’s going in the right direction.

Jarvis: How would you say the different tech platforms or giants stack up in terms of their relationships with publishers?

Döpfner: Apple has always been at the forefront and interested in helping publishers as they recognised early on the benefits of that relationship. At first, Google had a more difficult start; they were even a bit ignorant to a certain degree. But over time they have opened up to working more with publishers and offering concrete solutions. Facebook seemingly has good intentions but it’s probably too early to say. They could potentially be the worst player of them all because they’re really positioned to be a replacement of publishers. But if they continue with their current engagement, they can have a very positive role. Amazon is the most mysterious at the moment, an open question.

Döpfner: Well, Twitter is the weak link in the ecosystem as they have their own business problems. In this position, there might be more opportunity to develop something together.

Jarvis: As we now know where much of the fake news and misinformation is coming from and how that has impacted trust in news and news companies, where do you think this is going?

Döpfner: First of all, what often gets lost in this discussion is that fake news has been around for a long time. It’s just been accelerated through platforms like social media. But this presents a tremendous opportunity for publishers to leverage our trusted, high-quality journalism and brands. We should also not discuss this in a spirit of complacency; we have made our own big mistakes. Like getting wrong the US election with Trump, or Brexit. We make mistakes because we are human beings, but we are transparent about that and apologise. Those who intentionally create fake news are doing it to manipulate public opinion and create business. Globally, populist regimes are on the rise. In that situation, independent and critical journalism is vital.

Jarvis: I think one of the most important ways forward for journalism lies in personalisation. How is Springer working on this?

Döpfner: When it comes to user profiling, we are definitely not good enough. Digital natives are much better than us in this sense. So we have a lot to do there. We have worked concretely on a technology that allows us in a smart way to profile consumers, not just for us, but in a smart and transparent way also for consumers. If you are just using consumer data for a short-term financial gain, you are destroying your long-term relationship and your business.

Jarvis: Speaking of data, naturally, data protection is a big issue in Germany. With GDPR set to come into play soon in Europe, what are your thoughts on this?

Döpfner: GDPR comes with good intentions, but taking away the ability to gather third-party cookies or data puts publishers, particularly smaller publishers, at a tremendous disadvantage. The intentions are good, but a bit naive. What we need is smart, agile regulation. We can’t work for three or five years on a certain law to regulate because things are moving much faster. If we’re doing agile product development, we need agile regulation.

Jarvis: Is it too late (to impact regulation)?

Döpfner: No, there is a movement brewing where many are beginning to realise how this will impact their business. So there is a growing voice that could enable a tweak here and there to change it where it could still work.

Jarvis: Let’s talk about advertising. Most of your advertising is coming from digital. What about print?

Döpfner: We only have 12% of our total advertising revenue coming from print, so about half of that serves as total revenue. Print will last longer than most people think but it is not a growth business. Success and growth of the company is entirely depending on digital advertising. But of course we all face challenges in digital advertising. Just look at the last quarter of last year in the US where 99 percent of digital ad growth went to Google and Facebook. That is a huge challenge. At the same time, I am optimistic. I see a tremendous opportunity in native, and mobile is everything.

Jarvis: What is your prognosis for much of your counterparts in Europe?

Döpfner: We now have a fundamental change of mindset. I really feel that there is a progressive spirit emerging… It’s all about quality journalism and new business models and no longer about just saving the print business. There are opportunities for all brands, not just for The New York Times and Wall Street Journals of this world. It’s also for regional and local publishers. They have knowledge nobody else has and if they fully focus on digital products and innovation, there could be a foundation there for a great business.

Jarvis: What can you tell us about Business Insider and how it is doing?

Döpfner: (The acquisition of) Business Insider was very important for two reasons. It was a big move into the English-speaking world, and a big opportunity that digitisation provided for us. There is already a new generation of publishers, digitally native. There are new players. Some will succeed. Some will disappear. Very few will become big media companies. We wanted to make an investment into a digitally native company.

At the time it was seen as a liability and the impact on our stock prices reflected that. It showed how the market perceived digital content a few years ago. We have worked hard on a different sales strategy for Business Insider. We’ve worked hard on internationalization while growing the core product. We built a new umbrella brand for short-form, general-interest video content. Some of these initiatives are very positive and exceeded our expectations. We feel confident this brand will be one of those digital native publishers that succeed.

What about your recent collaboration called Verimi?

Döpfner: The idea is to create a European alternative for consumers to have a single sign-on entry point to the digital world that is user-friendly, but is also transparent, fair and attractive. We want to satisfy consumers but we also want to make money.