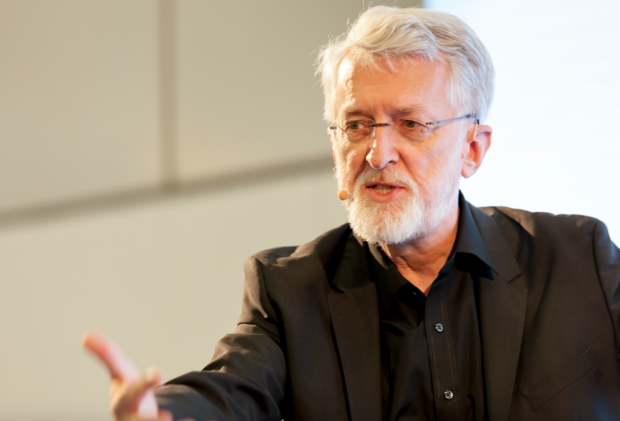 The issue has been a major priority for publishers, journalists and concerned citizens around the world for much of the past year. While almost everybody acknowledges that fake news has been around for decades or even much longer, the internet clearly has exacerbated both the problem and its effects.

“We see things rising, from 4chan to reddit to Breitbart to Drudge to Fox News, and suddenly CNN says, ‘Well, everybody’s talking about it, so we’ve got to do the same thing,’ and that’s when we see this vector of falsity,” he said.

Getting the public to trust facts and each other again

Noting that he was recently asked to write an article about how we redeem trust in media, Jarvis said he ultimately realised that was the wrong question.

“First, we have to help the public regain trust in facts,” he said. “We have to get them to trust truth again. Second, very important, we have to find a way that the public can start to trust each other. We have to move past the polarisation that we have, so that communities may enter into civil conversations, informed civil conversations. And third, we have to worry about trust in certain institutions besides media. I don’t just mean government or politics: I mean science. I mean academics. I mean institutions that are now being discredited regularly,” he said.

Many communities never trusted the media to begin with, and even fewer communities trust us now, Jarvis said, a fact we have to grapple with.

So what’s to be done?

Why? Because, Jarvis said, “It’s after the fact, and people might not trust us anyway. As Danah Boyd points out, when we fact check, we are doing the manipulators a favour because we have brought their message into the conversation, and because we have declared ourselves to be their enemy – that’s what they want.

“Fact checking is a necessity, I agree, but it is insufficient,” Jarvis said.

Setting a fertile ground for conversation

“I think we’ve got to set a more fertile ground for that public conversation, so I am very concerned about civility,” he said. “How do we bring people together to have that conversation? How do we convene them? Civility is the necessary first step to that civil conversation.

However, the platforms can certainly help, and he noted that they have started to make some contributions.

For example, Jarvis said Ben Gomes, VP of Engineering at Google, wrote a post in April that announced Google would take into account the quality of sources in its search rankings.

But Jarvis said he wants Google, Facebook and the other major platforms to do much more.

“I want them to be very open,” he said. “I want them to map the manipulation that occurs of them, because that’s an attempted manipulation of us. I want to see Facebook and Google and Twitter release all political ads for us all to see. More importantly, I want to see them release targeting criteria for those ads, so that we know who is being targeted with what messages.”

He added that he would like to see both platforms set a new standard for openness and transparency and build their authority in that area.

“It is now no longer good enough to say ‘Don’t be evil’,” he said. “You now have to be good. It is no longer good enough to just say that we follow the laws of the nation or the country we’re in. Twitter, for example, has to get rid of the harassment that is going on. They took an actress off Twitter this morning who was a victim of Harvey Weinstein. That’s the wrong way to go.”

In addition, Jarvis said he wants the platforms to do more to make strangers less strange. “Look at what happens in the US with Trump, the UK with Brexit, here in Germany with the AfD [the right-wing Alliance for Germany party]– their weapon is ‘otherness,’ ‘strangeness.’ We want to find strangers to blame for all our problems,” he said.

So where do we start?

Jarvis said he has started a new degree program at CUNY in Social Journalism. “The entire idea is that we start with communities,” he said. “We listen to their needs and empathise with them, and only then can you begin to bring journalism to them,” he said.

“We have to say that our goal is to help communities meet their goals. We have to understand them. We have to empathise with them.” – Jeff Jarvis

This means we have to grow diversity, he said: “Not just in our newsrooms, but in the entire ecosystem of news. In the United States, African-Americans, Latino Americans, LGBT Americans, Immigrant Americans. They don’t trust media because they are not reflected in the media.”

Publishers must share power with the public, he said. “We have to change the perception that we are an industry that makes a product, ‘The News,’ into [something viewed as] a service.”

He also stressed that publishers need to use platforms to take their journalism to the people. “Publishers have to take our journalism to where people are – on Facebook, on Twitter, on Snapchat on WeChat – wherever they are, and be part of their conversation.”

‘Media is a social token – not a destination or product’

Noting that his 20-year-old daughter is a big fan of YouTube, Jarvis said he has learned “something very important about what we do: Media is not a destination or a product. With YouTube, media is a social token. When my daughter shares something, she’s saying, ‘This speaks for me. This might speak to you – this is about us.’ It feeds the conversation that people are already having,” he said.

“The manipulators are aware of that,” Jarvis added. “They know how to feed the conversation. We don’t. We stand apart and say ‘Come to our destination and feed on our trough of news.’ We can’t do that any more. We have to change news fundamentally.”

Fortunately, he said, some publishers are coming up with interesting initiatives along those lines.

For example: Spaceship Media did an experiment in Alabama after the 2016 elections. They gathered 25 Trump voters from Alabama and 25 Clinton voters from San Francisco.

Journalists interviewed them, got to know them, put them in a room together, and let them start talking, Jarvis said. After a while, some of the voters came to the journalists and asked them to look up some facts “They trusted the journalists, they trusted facts. They asked for the journalism. They turned journalism on its head. We have to stop thinking we know best. Journalism is part of the process,” he said.

As another example, he pointed to Zeit Online’s “Deutschland spricht” project, which brought together some 1,200 people with diverse views for one-on-one discussions before the country’s elections in September.