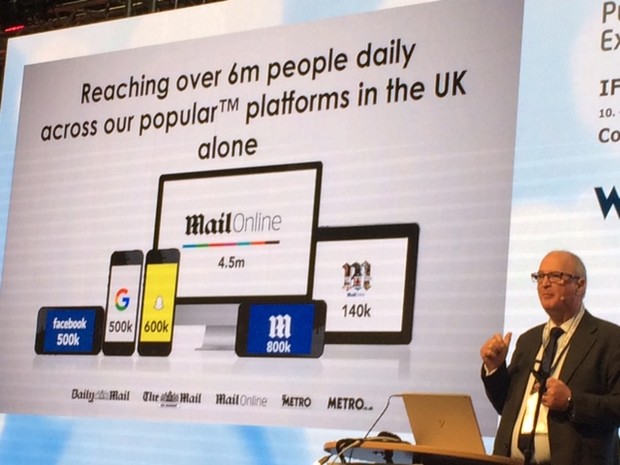 Today, “At Northcliffe House, which is the headquarters of our company, we talk about how a successful news media brand company prospers in a digital world,” Beatty told a standing-room-only crowd during the opening session of IFRA Expo and DCX in Berlin.

MailOnline is one of the most successful news websites in the world, and the third largest. It is the largest in English, with only a couple of Chinese media brands in front of it, Beatty said.

Some might think that with such a dominant position, dmg must have jumped into digital very early and had natural instincts for the medium. But that was not the case.

“We didn’t take our newspaper brands and put them on the web back in 1995, ’96,” Beatty said. “We didn’t know enough about it. We weren’t sure. We wanted to experiment. And it was only in about 2005 or 2006 that we decided to take our flagship newspaper brand and put it on the web.”

It would certainly seem that experimentation has paid off, and dmg has proved itself keenly adept at working across platforms, most recently launching DailyMailTV – not in its home market, the UK, but in the USA.

“It’s absolutely amazing to somebody like me, who started in the UK at the very early stages of the digital revolution, to see DailyMailTV now being carried by cable companies that reach 92 percent of the homes in the US.”
– Kevin Beatty, CEO of dmg, publisher of the Daily Mail and MailOnline.

He described DailyMailTV as a joint venture that uses the company’s journalism taken from New York, London, Sydney, and other parts of the world to create an hour-long TV show with the Daily Mail branding.

“That’s a brand extension which for us would never have been possible without the fact that our seriously popular journalism actually took off in the US,” he said.

6 million readers every day in the UK

In a world where there’s no shortage of content, it is quality that matters most, Beatty said. With its 800 journalists, dmg places a strong emphasis on storytelling.

“We are proud of our role as storytellers. We absolutely believe that storytelling based or founded on quality, popular journalism, is the essence of our business. Our livelihood depends on our content.”
– Kevin Beatty

He said on MailOnline, an algorithm continuously moves many of the most-viewed stories higher up on the homepage.

In total, dmg reaches some 234 million unique users per month, but Beatty says the number that matters the most to him and to dmg is the number of dedicated users, the people they reach every day, and that’s about 15 million, with 6 million of those being in the UK.

“We care about the 15 million individuals who engage with our products across a variety of different devices and across a day, average around 54 minutes, absolutely engaged with that content,” he said. “Furthermore, with that content and that level of insight, we can understand the interests of those customers at that point in time, and how that interest changes over time.”

Beatty added that the fastest growing part of dmg’s business, aside from digital-only advertising, is cross-media advertising, “where we combine the proposition of our newspaper audiences with our digital audiences to create real storytelling opportunities which some people would describe as native advertising. We believe it’s much richer than that. We believe the return on investment is much clearer than that.”

Coming back to print, he also noted that dmg reaches 64 percent of the adult population in the UK each month with its newspapers and is also beginning to see advertisers return to print for the first time in the past four or five years.

“Scale is absolutely important to us, because we believe, at this point in time, that digital advertising will make this business a hugely profitable business as well as actually building capital equity for our company. Not everybody agrees that that’s the case,” Beatty said.

However, dmg has 10 years of experience behind it, he said.

“We’ve been very popular in the UK for many of those years,” he added. “We’ve invested a lot of our time, effort, and capital in expanding across the world. And we now have two-thirds of our audience outside the UK. So we are very, very focused on combining storytelling with data and insight to actually show that digital advertising can, in that environment, make for a very profitable business.”