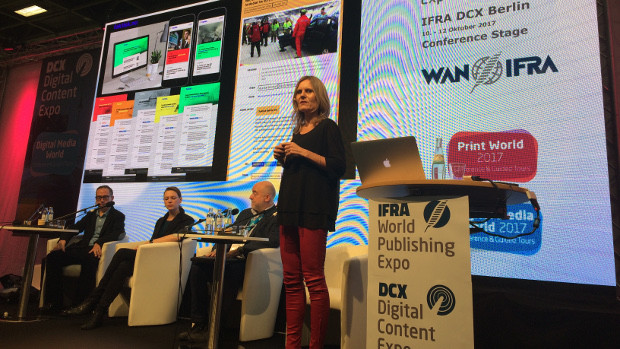 “If we didn’t fight back against misinformation, we would be in trouble, but it’s also an opportunity to regain trust, which we’ve lost a lot of in the past,” Denis Teyssou, innovation manager of video verification project InVid and head of AFP Medialab R&D, told delegates during the last day of the conference and exhibition.

Involving journalists, researchers, and academics, InVid, short for “in video, there is truth”, is building a platform that allows journalists to quickly verify videos and images.

InVid, which is set to run until late 2018 with funding from Horizon2020, released a verification plugin available for Chrome and Firefox three months ago, which has since been downloaded more than 900 times.

A “Swiss army knife for verification”, as Teyssou put it, the toolbox contains seven different features, including reverse image search on video keyframes, access to metadata, image forensics, and a magnifying tool to discover additional clues about the origins of a video or photo.

“When you see user-generated content that you want to use in breaking news reports, our tool can help with that. You can quickly check if the location is accurate, whether it’s been published somewhere else before, or if it’s been altered in some way,” Teyssou said.

Highlighting how easily photos can be faked, Teyssou pointed to the story of “Eduardo Martins”, an individual who passed off famous war photographers’ images as his own on his social media accounts, until a BBC investigation found that the character was completely fictitious.

“The main trick he was using was to simply invert images. It fooled the media but also the search engines,” Teyssou said.

To quickly verify this type of fake images, the toolbox contains a flip tool, which inverts the pictures so they can then be run through a reverse image search, increasing the chances of finding the original image.

“What took media organisations years to debunk only takes a few seconds with our tool,” Teyssou said.

A fact-checking initiative between competing organisations

While more tools and software are becoming available to help verify content, fact-checking initiatives and collaborations between media houses, research institutes, and independent organisations are also on the rise.

In Norway, the challenge of combating disinformation even brought competing media companies together.

“The challenges are so fundamental that we need to collaborate. Fact-checking is a kind of journalism that builds trust, and is perhaps the biggest component of accountability journalism,” said Helje Solberg, CEO of VGTV and chairwoman of Faktisk.

“While we are more trusted than social media, it’s not a comfort. Most people don’t trust us, and of all the challenges we have this is the biggest one.”

So far, 86 fact-checks have been published as part of Faktisk, focusing on claims made on social media and in public debates. Depending on their level of veracity, they are marked in different ways, for example as “completely true” or “partially false”. Out of the published fact-checks, around a third have been labelled as completely false. Run as an open-source software, Faktisk allows for unlimited reuse of its content.

On the financial side, the media companies involved in Faktisk have pledged to each invest one million NOK (€107,000) annually from 2018 to ensure the continuation of the project, which was founded late last year. Additionally, they are seeking external funding.

For a collaboration between competing organisations to work, Helje said it is crucial they “trust and understand each other’s needs and positions, contribute to the project, and believe they can learn and gain from it.”

“We believe it’s possible to be both fierce competitors, and collaborators,” she said.