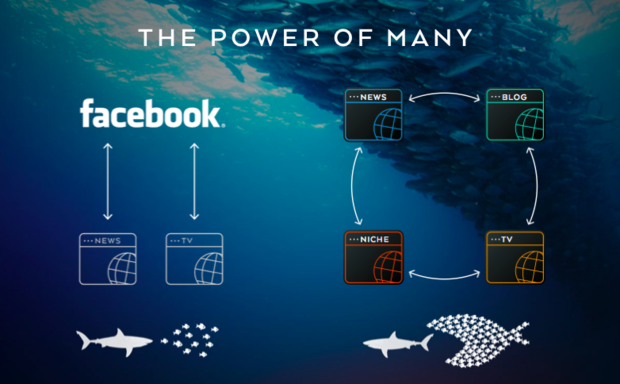 In this guest post from Dan Willstrand, co-founder of Strossle, a new member of WAN-IFRA, he takes a look at the power of collaborations and what makes them work.

Last year the “Duopoly” of Facebook and Google took almost all of the US online advertising growth, but that is not the only problem. Since these mega-platforms have placed themselves between the publishers and their users, they are now in control of who consumes what, where and when. Publishers are exposed to any shift in the platform provider’s algorithms or business strategy and terms.

Here’s one example: in January Facebook announced that it was (again) changing its News Feed algorithm. “We anticipate that most Pages won’t see any significant changes to their distribution in News Feed. Some Pages might see a small increase in referral traffic or outbound clicks, and some Pages might see minor decreases. Pages should continue to post stories that are relevant to their audiences”, said Facebook.

But the change has proven a further detriment to media companies that have seen organic (i.e. unpaid) reach on Facebook plummet. A trend that began with a 52% drop in organic reach in 2016 got significantly worse. From being the centre of Facebook’s News Feed, actual news is now a product that media companies must pay Facebook to essentially acquire traffic, further deepening the quagmire of challenges the media business model is facing.

So what can publishers do?

The challenge for the media industry is that investing in platforms that enable data-driven distribution and personalisation, on a level that can compete with industry behemoths like Facebook and Google, is completely out of scope. In smaller markets, the audiences required to ever deliver return on such investments simply do not exist. The only realistic way forward is through collaboration.

Partnerships is nothing new to publishers, at least not in the analogue history where they often shared costs for printing and distribution. But how does this work in a digital environment? Publishers see themselves as specialists and sources of insight and editorial craftsmanship. But readers have a tendency to focus on the value of content and care less about the brand name of the publisher. This is perhaps an inconvenient truth, but nonetheless the truth.

For publishers it therefore makes sense to focus on what they do best, i.e. create great content, and then enable readers to discover this content, regardless of where it was first created. By supporting each other, publishers can help their shared ecosystem grow, by tearing down the old boundaries that divided them, and focus on what their users want. This replaces “Unique Users” as a metric for digital publishers with “engaged readers” who choose to spend time on content consumption on the publisher’s platform rather than browse-and-bounce if they don’t find articles that engage them.

The future is automated

For publisher collaboration to be scalable, automation is required. Algorithmically driven (the concept of content recommendations based on user interest, content relevance and editorial quality) collaboration across media brands is the single most important tool for regaining the attention of users from the platform duopoly.

The additional upside of a traffic exchange that centres on the user and their interest is that visitors arriving from other media sites are contextually relevant and more engaged in editorial consumption. Analysis from publishers sharing traffic indicate that visitors coming from other media sites spend 120 percent more time than visitors coming from Facebook, and they generate 39 percent more page views. Why? Because visitors coming from other media sites are more prone to consume media content. The content they discover through a traffic exchange is based on Big Data, not silo-based information from single sites. Traffic exchange programs so far, and even content aggregation, has been manual and often labour intensive, but most importantly, done without the application of data about what is relevant for the individual user.

But hang on, aren’t publishers competitors?

Absolutely, if there, for example, are two major news publishers in the same city. But the majority of media outlets do not have overlapping audiences to an extent that it becomes a problem. Still, in order for a publisher collaboration to work, certain basic principles must complied with:

The ultimate success of collaboration depends on publishers’ willingness to redefine competition. The question media executives must ask themselves is: should they continue fighting each other for an ever-shrinking piece of the cake? Or should they exploit the enormous reach and impact they represent together?

Dan Willstrand is co-founder of Strossle, whose goal is to become one of the largest drivers of traffic to quality content. Dan has 20 years experience in developing technology platforms for both broadcasters and news publishers, and has been listed by “Digital TV Europe” as one of the 50 most influential people in the broadband industry.