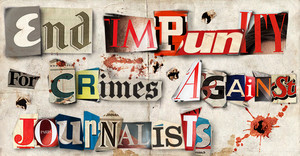 Valdez, 50, gunned down in Mexico City. Lankesh, 55, shot and killed outside her home in Bangalore. Galizia, 53, blown up in her car in Malta.

Like nine out of ten of the 930 journalists killed worldwide in the last decade, according to UNESCO, their murders have not been resolved. As press freedom shrinks in countries like Mexico, Turkey, Russia, Brazil, and India, dangers of violence to journalists are on the rise.

It’s usually not foreign correspondents in hot spots, like America’s James Foley, beheaded by ISIS three years ago in Syria. Ninety-three percent of the journalists killed are local reporters, offed by criminal gangs or corrupt political officials for their in-depth reporting on local corruption. Some, like Lankesh, were thought to be targeted by extremists for their political commentaries.

The horror of the killing – and in far greater numbers, jailings – is only matched by the lack of accountability of authorities in places where they occur. While we might expect journalists face danger in places like Afghanistan, Yemen, or Iraq, countries like India and Guatemala stand out on UNESCO’s lists of most dangerous places.

All of this makes the belligerent rants of our own President even more chilling. Often violence and oppression against those seeking to tell the truth starts with tough words and propaganda from a rising political leader and quickly manifests itself into something worse. Citizens and other media who stand by can quickly be caught off guard by the speed with which this phenomenon develops, such as in Turkey, where more than 150 journalists currently languish in Recep Erdogan’s jails.

Today is the International Day to End Impunity for Crimes Against Journalists, designated by the United Nations in 2013, to call attention to the rise in violence. So far this year, 30 journalists have been killed while doing their job, and 10 of those were murdered, according to the Committee to Protect Journalists. Last year, 48 were killed, 18 of whom were murdered.

Lots of people get murdered, especially in countries where freedom is oppressed and political power is used to squelch dissent. Journalists are not out to create political movements, however. They seek to find and tell truth, to hold governments accountable and shine a light on the darkness of corruption. When they are targeted, the public loses.

Yet journalists fail to elicit much public sympathy, and the competitive nature of our craft makes it difficult to band together to fight tyrants, criminals, or oppression of any kind. Often, as in Turkey, it is too late before the world notices.

In Russia, Editor Dmitry Muratov, of the popular newspaper Novaya Gazeta, where investigative journalist Anna Politkovskaya was killed in 2006, has begun arming his staff to protect themselves. This followed the stabbing of a Russian radio journalist, according to WAN-IFRA.

That might be deemed necessary in Russia but so far is still extreme for most countries. What we can do is start working better together to tell each other’s stories, both courageous and tragic. And tell you, the public, what is happening to us – quite rapidly in some places – and why it is important to them. We are storytellers, after all.

We often wonder how a political party in Germany was able to dominate the public psyche during the years of the rise of Hitler. Part of it was to blame, then stifle, then oppress, then take over the local media. Journalists paid with their lives, and the world suffered.

Hemingway’s line about bankruptcy occurring “gradually, then suddenly” is often applied now to any sort of dramatic change. As we pause to consider what is happening to journalists in many countries today, we might give a thought to where we are on that spectrum. Then the names Galicia, Lankesh, and Valdez, and their stories will not pass into history in vain.

David Callaway is president of the World Editor’s Forum, CEO of TheStreet.com and former editor-in-chief of USA Today.

Follow the UNESCO campaign #MyFightAgainstImpunity What’s Yours? for six people who are fighting impunity.