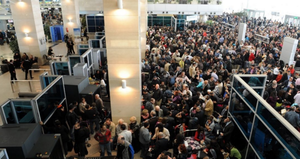 While it is true that journalism is still on its quest to find its future, this sample, drawn from a selection of 15 global and regional journalism awards, will provide you with an inspiring selection of storytelling, investigative techniques, collaborative enterprises and fearless reporting against all odds.

Told in different languages from different places, the celebrated stories report on the main challenges of our time, such as the odyssey of migrants and refugees, from Brazil to the Greek island of Lesvos. Others examine the living conditions of vulnerable and marginalized people, like women victims of sex trafficking in Egypt, or the gruesome hanging of a woman that shocked Tibet. Some report on children, investigating child sex slavery in Afghanistan, or babies for sale in Malaysia. A few stories deal with LGBT communities — the lack of transgender toilets in Hong Kong, and the ordeal of a homosexual man living in acute poverty in Cuba. Also giving voice to the voiceless, an AP story reveals the torture of prisoners in Yemen’s secret detention centers.

Many stories honoured this year courageously expose corrupt or abusive authorities. Indian reporter Rana Ayyub went undercover for nine months to record top officials speaking about the 2002 riots in Gujarat, which left at least 1,000 Muslims dead. However, when one of the investigation’s targets was poised to become the country’s new prime minister, Indian media houses refused to run the story. Despite threats, Ayyub decided to self-publish the transcripts and to unearth the complicity of top officials in the attacks. On the other side of the world, Sarah Ryley uncovered widespread abuse of eviction rules in New York City that resulted in the forced removal of hundreds of people, most of them from poor minorities.

Photo: Edwin Torres: The NYPD Is Kicking People Out of Their Homes, Even If They Haven’t Committed a Crime. By Sarah Ryley for ProPublica and the New York Daily News

Although there are fewer awards for opinion pieces, those recognized in 2017 are powerful commentaries calling for justice and unity in the face of divisive political rhetoric. Zhao Sole wrote about the heroism of civic NGOs in China, and Peggy Noonan “rose to the moment with beautifully rendered column that connected readers to the shared virtues of Americans during one of the US’ most divisive political campaigns”, according to the judges’ citation.


Daniel Berehulak’s work reminds us that powerful storytelling can also be conveyed through photography. In the words of the jury, it illustrates “the callous disregard for human life in the Philippines brought about by a government assault on drug dealers and users”. Film is another engaging format to tell difficult investigative stories, such as Mohammad Abu Deif’s Return Licensing, which documents the process of forging ownership papers and chassis numbers of Libyan cars and then turning them into Egyptian vehicles.

The combination of different formats in multimedia reporting is a clear trend. Outstanding examples include, The Impunity Series with photos by Carlo Gabuco and text by Patricia Evangelista to investigate the drug war as it continues to be fought across Duterte’s presidency in the Philippines. The habit of the gag (El hábito de la mordaza) by Honduran journalist Germán Andino is an almost 100-meter long comic strip that experiments with new forms of reading. It documents the phenomenon of gangs in Honduras, building on very personal stories that come to life through image and audio.

Some stories that used open source investigations (investigative journalism’s newest technique) were also celebrated, like Christiaan Triebert’s The Turkish Coup through the Eyes of its Plotters, published by Bellingcat, which pieced together the social media comments posted by the protagonists of the failed coup. Another winner in the investigative journalism field, Loopholes in Egyptian and Greek Airports, explores how flaws in safety systems allow human trafficking. From Romania, the DoR team was praised for its excellent reporting of the Colectiv club fire that broke out in Bucharest on 30 October 2015. The team managed to reconstruct this horrendous night by speaking with nearly 30 survivors and by consulting testimonies, videos, photos, officials and reports. The BBC Arabic’s Nawal Al-Maghafi was recognized for her long-form investigation Weapons of Mass Surveillance in which she documented how governments in Algeria, Morocco, and the United Arab Emirates use high-tech mass surveillance to monitor citizens.

Published under byline aliases: Loopholes in Egyptian and Greek Airports.

Data journalism, another rapidly advancing area of the profession, has its own special awards. Among the winners were: an open database of assets of Serbian politicians created by KRIK in; a human rights database in Colombia, Rutas del Conflicto; and Ctrl+X and Abraji’s database about lawsuits filed in Brazil by companies and politicians who wanted to stop stories from being published. Winners in data visualization were the map Want to fix gun violence in America? Go local and the visual narrative The Stories Behind a Line, among others.

The Stories Behind a Line. By Federica Fragapane

A further takeaway from this 2017 review is that difficult circumstances can breed the best journalism. In the U.S., Eric Eyre of Charleston Gazette-Mailwon a Pulitzer “for courageous reporting, performed in the face of powerful opposition, to expose the flood of opioids flowing into depressed West Virginia counties with the highest overdose death rates in the country”. And freelance video journalist Waad Al Kateab’s Inside Aleppo: The Last Hospital was among the best war reporting; while correspondent for Radio France Internationale’s Hausa service Ahmed Abba published reportages from Cameroon that rattled the regime so much that it sentenced him to jail in 2017 on sham charges of terrorism.

These awards show not only great storytelling and investigative techniques, but also how some stories lead to concrete positive outcomes for society. This was the case of Project №1 by Asaad Al Zalzali who unearthed the misappropriation of $200 million from an education project in Iraq and tracked the money to a bank, with the result that the country could recover half the money. Similarly, the joint story Making a Killing by the Balkan Investigative Reporting Network and the Organized Crime and Corruption Reporting Project (OCCRP) exposed an arms pipeline between Central and Eastern Europe and the Middle East worth €1.2 billion. After the story was published, the European Union announced it would monitor the flow of weapons and several countries reviewed their policies. In Nigeria, a two-month long investigation by Emmanuel Mayah uncovered multiple mass graves, lending support to allegations that police and military forces have been committing extrajudicial killings of opposition groups. Following reports that included photo evidence, human rights groups called for an independent probe and the army announced a new investigation.

There lies the essence of journalism, today and tomorrow. May you find the renewed energy to follow the path of these inspiring journalists in 2018 and beyond.

This article was produced by the Open Society Foundations Program on Independent Journalism and is republished with permission.