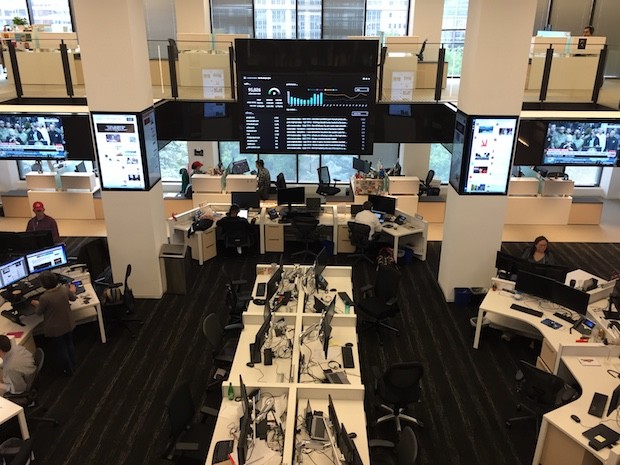 1) Niches prove successful: New products and verticals for the audience

Targeted websites, newsletters and podcasts designed for specific audience segments are both popular and profitable for US publishers. During the 5 days we spent in Washington, D.C., Philadelphia and New York City – there were several discussions surrounding the new 2017 content verticals and product launches catered to specific group of users.

Politico currently has a very diverse offering of podcasts, including their “Women Rule” series. This bi-weekly podcast programme features influential female leaders discussing their involvement in politics, policy-making and more. As these issues have reached a fever pitch in the US, this podcast provides a necessary platform where women can listen and learn from prominent women sharing experiences of leading companies across all industries. Due to its extremely topical and relevant themes, this podcast has been able to captivate a powerful audience – enabling them to get specific partners on board. They have support from both Google and The Tory Burch Foundation as its founding partners.

WAN-IFRA is leading its own initiative to bring more women into leadership roles in the news media industry. For more information about WAN-IFRA’s Women in News programme, visit our site.

Additionally, a day before our group’s visit, they added to their portfolio the news video series, “What Happens Next.” By partnering with Retro Report, they are rolling out these documentaries focusing on the future of Home, Money, Food and more. And Quartz’s new products are not only limited to digital. Consider their first book, “The Objects that Power the Global Economy,” whose first edition sold out even though it was promoted exclusively on Quartz channels. Proof that a loyal audience will not hesitate to pull out their credit cards for something from a brand they know and trust.

US publishers are serious about investing in teams to grow audience loyalty and increase paid subscriptions. There are now full-time jobs in the newsroom where dedicated employees are studying data on user behaviour. This has led to the rise of audience engagement teams. While some of the publishers we visited on our Study Tour are just starting to build up their teams, others such as The Wall Street Journal, boast 9 employees. And The New York Times has recently announced their commitment to intensify their audience strategy by creating new roles to serve their 3.5 million subscribers and their resolve to continue growing that number.

As more and more news organisations become less dependent on digital advertising, they really need to serve their paying audience – now their most vital revenue stream. This analysis is enabling them to improve the overall user experience – making it feel more personal and bespoke. While the job title certainly varies across US publishers: “Audience Engagement Editor,” “Audience Analyst,” or “Editor, Audience and Analytics,” this up-and-coming role will be a crucial hiring profile for all publishers aiming to attract and retain paying users.

3) Nationals leverage their size – Tapping into their existing resources

When our group sat down in the central hub of the USA Today newsroom and spoke to Editor-in-Chief, Joanne Lipman, and Managing Editor, Donna Leinwand Leger, they learned that their new, ground-breaking journalism series, “The Wall,” was developed out of a need to answer readers’ questions on Trump’s promised wall along the Mexican/American border. What is the progress on the “Wall”? Will it be built OR can it even be built?

USA Today knew it could answer these questions, but they understood it would require a combined effort unique to the company’s position. Within their family of Gannett properties, or their NETWORK newsrooms, they were able to unite the efforts of 30 reporters, photographers and videographers all from Gannett newspapers situated in states bordering the proposed wall.

USA Today gives their readers many opportunities for exploring The Wall

Thanks in part to their unparalleled reach across the US border states to Mexico and their efficient use of pulling together time and resources – this really played to their strengths. As a result, they collected extensive interviews, video material and drone footage (essentially mapping out the length of the proposed wall). A fantastic example of journalistic collaboration enabling readers to truly benefit from their unique position of local, regional and national coverage. A lucky member of our Study Tour group was able to “visit” the border using the developer’s VR headset – as part of their “VRtually There” series.

Good journalism, however, is expensive and USA Today is now testing paid memberships and has rolled out a paid, ad-free app for users this past October. As they gear up to do more collaborative reporting, it will be interesting to see what’s ahead for 2018.

In October, WAN-IFRA visited top US newsrooms in Washington D.C., Philadelphia and New York City on our annual World Editors Forum (WEF) Study Tour. This sold-out event, aptly named the Super Social Newsroom Study Tour, brought together 15 international editors and executives – representing 4 continents – to discuss what’s working in the current media landscape. To join us next year, and discover for yourself why the US continues to take the pulse of what’s going on in news media, visit our website.