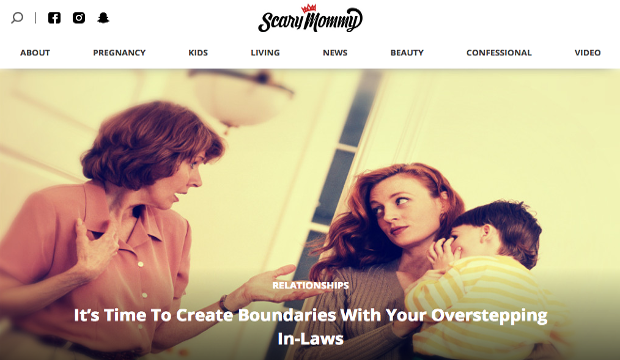 Some Spider describes itself as a media and entertainment company, with a development strategy focused on mobile, social and streaming, and a business model entirely based on digital advertising.

Some Spider’s flagship brand Scary Mommy is a channel targeting women united by motherhood. “We don’t talk to them as moms, but as women with kids. You don’t give up your hopes, dreams, style, professional lives, who you are, when you become a mom,“ Smurl told our WAN-IFRA New Digital Business Study Tour group during our visit to New York in October.

With about 20 million unique visitors per month and 5 million fans and followers on Facebook, Instagram and Snapchat, Scary Mommy is one of the largest women’s brands in the US. Its studios produce original video series and co-branded videos designed for mobile and social platforms distribution. It’s still Some Spider’s essential source of revenue with US$ 14 million in advertising this year. Still, Smurl has evaluated the paid content potential and he believes there’s a US$ 10-20 million business to build out of paid subscription with Scary Mommy.

Paul Smurl will speak on “Know your audience – the rise of an identity brand” at Digital Media Europe, 10-11 April in Copenhagen.

The company re-launched its second brand called “Cafe” in 2016. Cafe is also identity-based, but defining it has proven a bit trickier: “It’s a belief identity brand,” Smurl explained. “Because of what’s happening in US politics, there is a growing number of people, about 30-35 million, mostly young, under 40, that we’ve identified as concerned and upset about the direction the country is taking.” Cafe will focus on issues this audience cares about and cover it via video, text, and original video series formats, “but not in the form of a daily news report or topics-based like business sections or sports… We can give voice to these concerns with a different spin as some of the popular shows do on TV.”

Some Spider is betting big on video and has shown an ability to get a good social lift for them. Video has a large team within the company with studios in NYC and Los Angeles. They managed to poach Nicholas Fabiano, former Buzzfeed executive producer/director of branded video, who brought almost his entire team to work at Some Spider Studios. Media ad spending in the US is about US$ 200 billion with a big part going to TV.

“We believe this sector will face a major disruption in the next 5 years and we think we have solutions and alternatives,” Smurl said, adding that Some Spider could tap US$ 100 million in ad revenue following that strategy.

This year, Some Spider is producing 4-5 videos a day, original series and co-branded: “We need to ramp that up, triple production next year and we’re out raising money to help us do that,” he concluded. As a reminder, Some Spider was founded in 2014 by Vinit Bharara after he sold his company Quidsi to Amazon for $540 million (in 2010).

‘Stand-alone subscriptions are in trouble’

Given Smurl’s background, it was tempting to ask him what he would do if he was still in the executive team of a big newspaper brand. Unsurprisingly, he’s quite radical: “I would make it into a massive video-based channel and reduce the investment in breaking news. I would turn the whole operation upside down. So many people are still dedicated to producing yesterday’s news on print. I’ve been there. A very small team putting out the mobile news report at 5.30 in the morning. Which is where most people are checking their morning news. Most of the newsroom is arriving at 10.30 when half the world has already decided where they want to consume the news. It’s crazy. I would just invert that pyramid: instead of 15 people working for the mobile newsroom, make 15 create the newspaper and the rest work for mobile!”

Among other strong opinions Smurl has formed in recent years, he has come to the conclusion that it’s wrong to focus the whole business effort on stand-alone digital subscriptions, especially if the hope is to convert younger generations. “Very few news brands can be successful with that. My big headline would be that stand-alone subscriptions are in trouble and especially if you’re trying to reach people under 35. If you’re trying to convert them you have to think about the price and content bundles.”

His second point also goes against what many publishers believe: “I recall when I was working at the NYT that we were really focusing on getting people to the destination (Editor’s note: NYT digital platforms). In my mind, it totally counters the way people are consuming content. Back then, I already thought distributed media was the future. Publishers are not willing to take those kinds of risks, although they could be amazing new channels on social, mobile and streaming and become successful distributed media brands.”

In October, WAN-IFRA took a group of publishers to look out for good business ideas & realisations in Chicago and New York City. This New Digital Business Study Tour brought together media executives from across the globe to discover innovative business models from inside and outside traditional media companies. To get an overview of the study tours taking place in 2018, email Nicole Frankenhauser at nicole.frankenhauser@wan-ifra.org.

David Walmsley: ‘Journalism is about having the wherewithal to recognise what you don’t know’

Seven building blocks for storytelling during the time of COVID-19