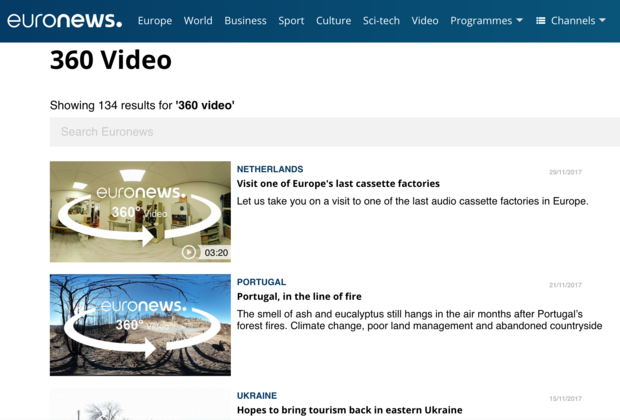 This article first appeared in WAN-IFRA’s recent report titled: “A different perspective: ads in VR or 360,” which WAN-IFRA Members may download for Free. Non-members may purchase the report. Click here for full details.

Like WAN-IFRA, Euronews received funding from Google DNI, and from the get-go, they thought about monetising, as opposed to starting to produce content and worrying about it later. Their first successful monetisation was through a partnership with Samsung in the second half of 2016 (videos featuring patch at the bottom with “powered by Samsung Gear”).

They are now working with their sales teams to find new revenue streams and opportunities, looking into doing more sponsored and branded content. Other ideas include selling footage, as there’s no place to buy stock footage, setting up joint-training centres, and building a revenue-share model.

WAN-IFRA: What are some of the issues one needs to consider when advertising within 360 video?

Thomas Seymat: “With regards to pre-roll advertising, we also need to take into account the content we produce. You could potentially monetise news that’s a bit on the lighter side, but there would be issues with more serious content. It probably wouldn’t be the best idea to have a fancy car advertisement before being emerged in a video on a humanitarian crisis or conflict zone somewhere. Of course we need money, but there are also ethical considerations we need to take into account.

“Such guidelines regarding pre-rolls on sensitive content already exist in media companies, and 360 video should not be exempt in following them. Quite the contrary.

“At the same time, it’s also a matter of immersion. The pre-roll ad and the content need to fit together. For example, transitioning between a glitzy ad to a conflict zone would be very disorienting, and we don’t want to alienate the audience. 360 video is supposed to be engaging content, and we don’t want to make it more difficult for viewers to feel engaged and immersed.”

As part of its DNI-funded project, WAN-IFRA developed and placed interactive ad units inside 360 video, such as ad billboards, 3D objects or logos. What is your take on this?

“I do see some limitations for the project, but it is interesting to have the possibility to easily develop ad banners inside 360 video. It could work well for digital products such as euronews’ luxury vertical, Living It, for which we’ve done 360 videos on expensive and luxurious houses in London. It would be interesting to apply these ads there, showing viewers the model of a Jacuzzi, for example, and where they could buy it.

“In a nutshell, it really depends on the content and how the ads are integrated. I think it works well for video scenes that are pretty static, and that you spend a lot of time in. Some scenes in 360 videos by euronews are quite short, so missing an ad might be an issue.

“Other ideas: shoot a 360 video on an island, and a link to plane tickets could be included in a nicely integrated way, and then have a revenue share between euronews, the ad company, and the travel company, something like that would have potential.”