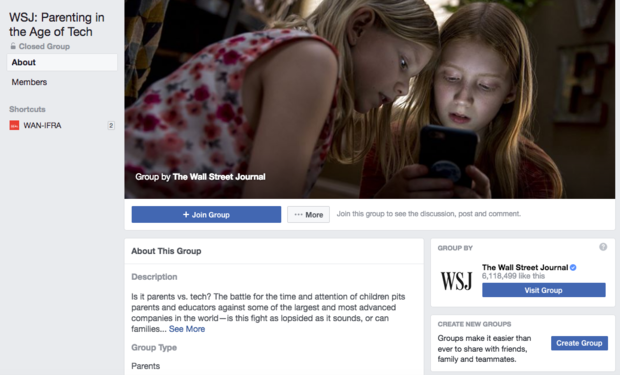 The Wall Street Journal, owned by News Corp, moved from a one-size-fits-all strategy – where all users were served the exact same Facebook ads – to a more personalised approach, which has allowed them to more than double their subscription growth from Facebook between 2016 and 2017.

A similar move is being played out by another well-known News Corp brand, The Times of London, which has been experimenting with Facebook Groups during the past couple of months to attract new readers, with the ultimate aim of converting them into subscribers.

Participants of WAN-IFRA’s New Digital Business Study Tour, which took place in Chicago and New York in October, met with The Wall Street Journal’s Paul Plumeri, Director of Brand Marketing, and Jon Buckley, Global Digital Acquisition and Media Director, who explained the ins and outs of their approach. They asked us, however, to keep specific figures on growth to ourselves.

“For the Journal, or any established e-commerce brand, there’s always an audience out there willing to buy, but the readers’ propensity to buy differs,” Buckley said.

“Some customers will see a subscription ad, click it, and sign up straight away. However, for the majority who may have visited the site only once or twice, we know intent to buy is likely to be low. Instead of serving a subscription offer, we focus on engaging the base.”

Establishing a relationship with colder prospects

Buckley explained that when The Wall Street Journal first approached Facebook as an acquisition channel, they found that they would only engage their warmest leads.

“The biggest shortfall with the approach was that we were quickly hitting a ceiling of users who were willing to buy anytime,” he said.

“We just weren’t connecting with anybody else, and the reason for that was that we were taking a one-size-fits-all approach.”

“For future growth and continuous growth, we had to change our approach and we began by establishing a relationship between the colder prospects and the brand. Over the past two years, The Wall Street Journal created an always-on content marketing funnel through Facebook, which is designed to hook people into The Wall Street Journal’s content – one that is personalised to the user, based on their browser behaviour and interaction with WSJ.com,” Buckley said.

“The paid media strategy uses organic editorial posts, which are, in-turn, boosted to reach the audiences they think would benefit from exposure to WSJ content. This ensures we are always increasing engagement amongst cold prospects and continually moving them further down the acquisition funnel. This has resulted in a significant volume of sales being driven via social media channels,” he said.

A further benefit of this approach is that it is also helping The Wall Street Journal to acquire a younger subscriber base. While typical subscribers are in their 50s, subscribers acquired through Facebook are between 18 and 34-years-old.

“But it all takes a lot of time to work,” Buckley said.

“It takes time to cycle prospective subscribers down the funnel. You need to be willing to invest in it up front. You need to set aside enough money to say short-term it’s a hit, long-term it’ll drive the right type of audience for me.”

WAN-IFRA took a group of publishers to look out for good business ideas and realisations in Chicago and New York City in October. This New Digital Business Study Tour brought together media executives from across the globe to discover innovative business models from inside and outside traditional media companies. To get an overview of the study tours taking place in 2018, email Nicole Frankenhauser at nicole.frankenhauser@wan-ifra.org.