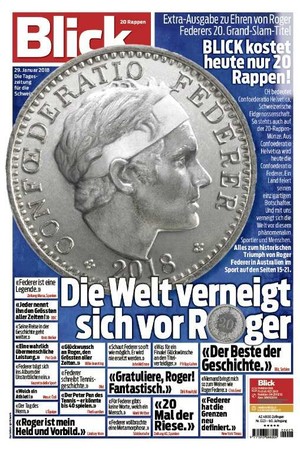 In light of “King Roger’s” 20th Grand Slam title at the Australian Open on Sunday, the Monday issue of Blick (which means “view”) had a cover price of just 20 rappen (0.17 euro) instead of the usual price of 2.50 Swiss francs (2.15 euros). The price equaled one rappen for each Grand Slam title, as Blick publisher Ringier wrote in a press release.

The tabloid’s Monday issue featured a four-page spread about the finale, in which Federer beat Croatian Marin Čilić and became the first male player to win 20 Grand Slam titles.

Blick, Switzerland’s only tabloid, is the most widely read paid-for newspaper in the country, with a daily circulation of more than 130,000 copies. Founded in 1959, the daily publishes stories about politics, business, society and sports.

Felix Bingesser, Editor-in-Chief of Blick Sport, said, “Roger Federer has long been an icon. And even at 36 years old he remains a fascinating and exciting figure. This 20th Grand Slam win is another example of this. With our ’20 Rappen’ campaign, we want to celebrate this historic success along with the people of Switzerland, since this is something we won’t experience ever again.”

Ringier is a diversified media enterprise operating in 19 countries and employing some 7,300 people. Established in 1833, Ringier operates media brands in the print, television, radio, online and mobile domains. Ringier, a family-owned company, is based in Zurich.