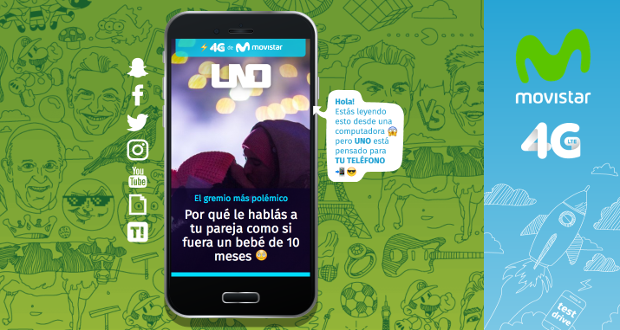 Grupo América’s UNO won the WAN-IFRA World Digital Media Award for Best Innovation New Product in late 2017. This article first appeared in our Best Practice in Digital Media report, which was published just before the end of 2017. WAN-IFRA Members may download the report for free. Non-members may purchase the report. Click here for full details.

“We found that it’s quite difficult to reach millennials with the traditional journalism we produce,” said Alejandro Lladó, Grupo América’s digital business manager.

“So there were two ways: either we transform certain parts of the traditional brand to better reach millennials or we create an entirely new product that has nothing to do with traditional media. So we opted for the second route.”

Primarily focused on audiovisual content, UNO, which brands itself as “Argentina’s first native mobile media,” publishes content on its mobile site and on a variety of social media channels. The desktop version of the site features a scrollable image of a mobile phone on a green background, replicating what the content looks like when accessed via mobile.

UNO claims to attract around 500,000 monthly users to its site. More than 90 percent of them access the content via mobile, and upwards of 85 percent are between 18 and 34 years old.

The 10 staff at UNO are all in their 20s and 30s and were hired from outside the group. They work in the newsroom alongside traditional digital journalists from other channels and products that belong to Grupo América, such as A24 or Primicias YA.

Additionally, a roster of freelancers helps produce content, leading to an output of about 50 to 60 pieces of content published per day across social networks and the mobile platform. Most of that, such as infographics, images or videos, are produced in-house, while freelancers are in charge of creating the more text-heavy content. UNO’s unique approach and successful use of social media was rewarded with a World Digital Media Award in the categories Best Innovation New Product and Best in Social Media Engagement.

But let’s backtrack to the origins of the product. UNO launched a newsletter in March 2016 to gauge how its millennial target audience would respond.

“We strongly believe in the minimum viable product, so we launched the newsletter as a first product to do tests, and to understand whether the language we were using and the formats we created worked,” Lladó said.

“We started out by curating stories from other news organisations we thought were relevant to young people. We then transformed them with our own language and formats, and linked back to the original source.”

While UNO has since expanded its offer, the newsletter is still a fundamental feature, with around 10,000 subscribers and open rates between 30 and 35 percent, according to Lladó.

Sent out every day from Monday to Friday, each edition features the five most important stories of the day, described in short text snippets, and illustrated with gifs, pictures, and emojis.

Identifying a tone of each network

With social media at the core of the medium’s strategy, the UNO team attempts to produce content that aligns with the characteristics they’ve identified for each platform.

Although UNO is continuously experimenting with a variety of content formats and an approachable and more conversational tone, they aim to adhere to the journalistic values held by the group.

“What we do at UNO is pure journalism. We cover stories that are relevant to millennials while respecting journalistic rigour and traditional journalistic values,” he said.

Naturally, entertainment is an important part of the content offer, but UNO also aims to cover more serious topics for its audience, including gender equality, the legalisation of marijuana, or the “Ni Una Menos” (Not one less) movement that has spread across Latin America in its attempt to halt violence against women.

“We cover topics that are of interest to millenials, and we also found that many of those are topics traditional media companies aren’t so keen on,” Lladó said.

Lladó characterises UNO as a “disruptive” medium, and stresses that the same strategy is applied to monetisation.

“UNO doesn’t have an ad server, there are no banners, pre-rolls, nothing that’s associated with traditional advertising. We only focus on branded content,” Lladó said.

UNO’s product and content teams work closely with brands wanting to advertise with UNO, to fully understand the message they want to convey, and transform it into appropriate content.

“It needs to be journalistic content that will interest our users. It’s a challenge because it’s a new experience and a learning curve for both our commercial team and the brands,” Lladó said, adding that UNO broke even a few months ago.