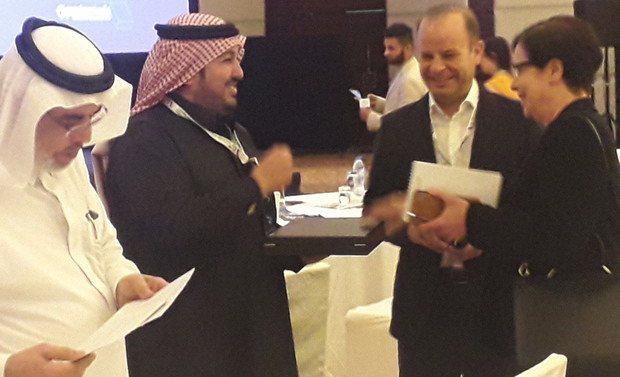 More than 300 national and international media experts came together in Dubai to examine the challenges of change. WAN-IFRA and partners Dubai Production City (DPC) and Dar Al Hayat presented a high-powered line-up of publishing professionals from countries including Sweden, Singapore, Saudi Arabia, and the USA.

The participants were welcomed to Dubai by Majed Al Suwaidi, Managing Director, Dubai Media City, and Ibrahim Badei, Member of the Board of Directors, Dar Al Hayat, UAE.

“The press is a guard for values and history in the UAE,” explained Ibrahim Badei, “which is why we are investing through partnership with WAN-IFRA to reach individuals with vocational training, sharing, and integration with media members.”

The need for partnerships to help face the future was made

clear by Majed Al Suwaidi (in photo at right), who said, “We have witnessed the change in media landscape and how it evolves, and today customers need to be empowered to create their own content across multiple platforms. Giving those customers what they want is not a debate because they are the instigators. Publishers must transform both content and distribution, embracing a more collaborative media landscape.”

Dr. Saleh Al-Humaidan, Chairman of the WAN-IFRA Middle East Committee, Saudi Arabia, and Mechthild Schimpf, Director Middle East, WAN-IFRA, thanked all attending and underlined the importance of cooperation. “At WAN-IFRA we believe networking is the catalyst for growth,” explained Mechthild Schimpf. “By sharing best practice we facilitate connections for sharing and learning from each others’ experiences.”

All eyes then turned to the stage for the keynote speech delivered by His Excellency Omar Bin Sultan Al Olama, Minister of State for Artificial Intelligence of the United Arab Emirates.

“I’m here bearing neither good news nor bad,” His Excellency began. “I am here to share some facts, and possibly a perspective, as we must all understand the changes that are coming – but change and potential are neither positive nor negative; either can bring tremendous promise, or the fear of negative impact.”

His Excellency painted a portrait of an industry at a crossroads, with artificial intelligence (AI) already playing its part in journalism and highly reputed sources such as Reuters and the Associated Press producing thousands of automated news reports annually. “This can be seen as a threat to jobs, but I see positives as we hand over repetitive tasks to automation and instead focus on the human side. Every single one of you will be augmented by AI, just as today we are augmented by our smartphones. When Ben Franklin experimented with electricity or Faraday created the dynamo, they had no idea what we would be able to do today at the click of a button.”

His Excellency concluded by saying the only appropriate way to deal with such powerful transformation is to “all jump aboard and take part in the conversation,” and that was the theme for the rest of the first day.

Thomas Jacob, Chief Operating Officer of WAN-IFRA, gave a roundup of industry transformation around the world, and industry specialists went into detail about how news media have re-invented themselves in Sweden, Denmark, Oman, Saudi Arabia, and the USA.

The day ends with the official announcement of the Middle East Digital Media Awards Winners, before day two continues with more expert examination of media ranging from Hollywood to social media, and from print to AI.